NimbleBit has shown success across a variety of free-to-play titles, but Tiny Tower (Free) seems to take the cake as far as popularity is concerned. When Tiny Death Star (Free) came out last year, NimbleBit’s formula saw some nice improvements but overall we were left with mostly a sprite refresh with some heavy handed IAP incorporated on top of the base gameplay. With the launch of Tiny Tower Vegas (Free), NimbeBit has retaken the reigns back from Disney Mobile and has made what I consider to be the true sequel to its tower building title. Suffice to say, the mini-game improvements combined with a return to the more friendlier NimbleBit IAP approach makes for another awesome F2P from the developer.

If you’ve played the original Tiny Tower then the basics in Vegas won’t be hard to master. The open-ended goal of the game is to build a giant skyscraper by earning coins and using that currency to build floors. Coins are earned by keeping your floors stocked with items for bitizens to purchase. Earn enough coins, and you can add a new floor, increasing your earning potential that will help keep up with the ever-increasing cost of adding a new floor. In addition to the core timer-based gameplay, players can also ferry visiting bitizens to floors of their choice for tip money (typically in the form of coins and timer reductions). 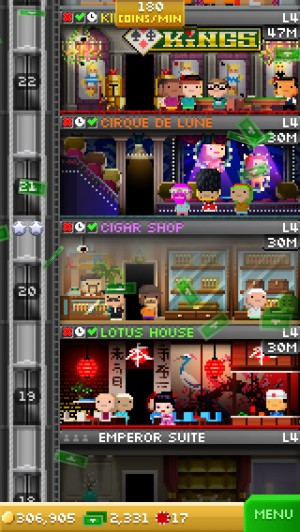 While the above is pretty familiar, there are a few changes to the core formula that are worth mentioning. For starters, residence floors from the previous game are now hotel rooms. Delivering a bitizen to such a floor starts a countdown until check out. Once the countdown is over you can tap on that floor to get a lump sum of coins (vice the slow trickle of coins from stocking regular floors). Since there are no longer ‘residents’ in your tower, bitizens go to your lobby to hope for a job. Your lobby can keep up to five bitizens at any one time and can include regular bitizens and a variety of VIPs (that can lower construction times, fully stock stores, etc.). Thus, there’s a bit of strategy in making sure unwanted lobby bitizens are continually kicked out to make room for new ones.

The biggest changes to debut in Vegas are the addition of casino game floors and the introduction of a new premium currency (the ‘Chip’). Casino game floors allow players to play mini-games based on popular casino games (Slots, Blackjack, and Poker). Playing casino games requires chips to participate and the payoffs are potentially large amounts of bux, which are still used to speed up floors, fill up hotel rooms, upgrade elevators and purchase cosmetic upgrades.

The inclusion of chips shifts the dynamics of freemium currency in Tiny Tower Vegas. While bux are still the ‘end-game’ currency (besides coins, obviously) that you want to accumulate, chips become a potential resource for accumulating large amounts of them in relatively short order. As you can imagine with a game being set in Vegas, there’s always a chance that playing a mini-game won’t reward any bux. However, the payoffs are potentially enormous with the right amount of luck. Of course, chips are also now the rarest currency, and are accumulated far slower than coins and bux. Thankfully, in true NimbleBit fashion there are plenty of mini-quests that are randomly available to earn chips, as well as the occasional random chance of getting one awarded for ferrying a bitizen to a floor.

While the addition of the casino mini-games seems small, I think it’s an excellent addition to Tiny Tower and adds a much higher level of active participation beyond the typical passive timer-based gameplay. The gambling mini-games are engaging and do a good job of encouraging players to keep the game open to accomplish quests and earn chips to play them even further. Social functionality reminiscent of the Pocket Planes/Trains games offer additional benefits to playing the casino games beyond simply earning bux. The only downside to what I think is a great addition to the gameplay is the fact that players not familiar with casino mini-games (or have an aversion to gambling games, virtual or otherwise) won’t really be able to appreciate a significant addition to the overall game.

Another facet that I appreciated was the further attention to detail in Vegas’s presentation. BitBook entries are far more entertaining, the randomized missions are quirky and the pixel art is far better than the original. Floors are a lot more animated and the sense of an overall ‘Vegas’ theme makes the idea of an all-encompassing tower a bit more plausible.

Despite its passive gameplay, Tiny Tower was a hit with the casual crowd. The inclusion of casino mini-games in Vegas should alleviate the complaints that some folks had about its ‘gameplay’ while still retaining the simple timer-based gameplay in regards to building and expanding your tower. Fans of Tiny Tower will love this Vegas sequel and for others I’d advocate checking it out.