Do you like the review headline? See, what I did there was take Clash of Clans (Free) and clumsily mixed Star Wars with it in a very on-the-nose way, in hopes that it would provide some entertainment to fans of both. Sorry for the sidetrack there, you came here to read a review of Star Wars: Commander (Free), right? It’s the latest in a very long line of Star Wars-themed games that give a popular genre or title a healthy coat of Star Wars paint to see if something magical will happen. To the credit of Lucasarts, this has yielded some strong results in the past. Star Wars Baldur’s Gate was pretty cool, Star Wars Wing Commander was amazing, Star Wars Battlefield 1942 was really fun, and even Star Wars Doom was pretty good for its time. Of course, there was also Star Wars Fighting Game and Star Wars Twisted Metal, so clearly the pendulum swings both ways here.

All sarcasm aside, I think there’s a certain sort of merit in mixing in the Star Wars license with a variety of popular genres. No matter how you feel about George Lucas after the Prequel Trilogy, I don’t think even his biggest detractor can deny that his efforts produced a great science fantasy universe that can support all kinds of interesting stories and concepts. For video games, that means almost any genre is going to fit somewhere in the extended fiction, and no game is poorer for having lightsabers in it. Things frequently break down in the execution, but in an odd way, I think even the worst Star Wars games usually show enough affection for the franchise to please fans on some level. If something like Angry Birds: Star Wars (Free) can work, and in my opinion it does, then sure, bring on Clash of Clans: Star Wars. 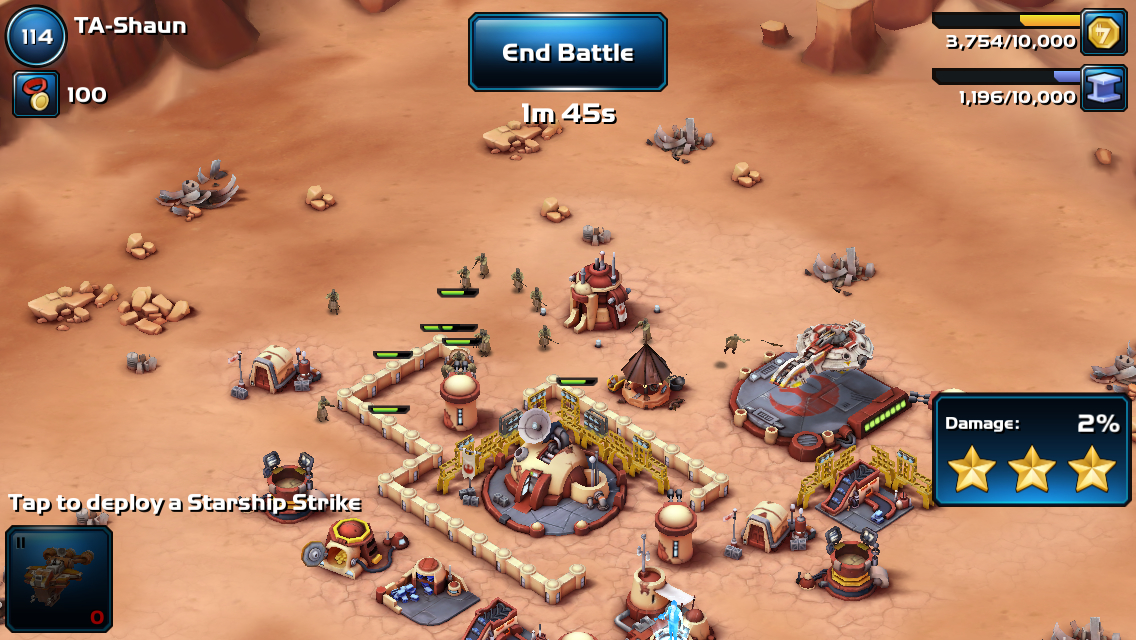 The funny thing is, this game is so close to working, you can almost taste the Wookiee kiss. Oh, to be sure, it is following the Clash of Clans script very closely, but that’s probably the smart play if you’re trying to put together a free-to-play game in this sub-genre. The game starts with you setting up a base on the desert planet of Tatooine with a chatty partner, sometime after the events of A New Hope. Before long, you find yourself on the wrong side of Jabba The Hutt and need to form an alliance with either Princess Leia and the Rebels or Darth Vader and the Empire. Joining the Empire will give you access to their advanced war machines like the AT-ST, while joining he Rebel Alliance will give you access to Han Solo and Chewie. I presume that’s an easy choice for you.

Once that choice is made, the game begins in earnest, and it works pretty much like most of the other popular free-to-play games in this genre. Gather up resources, build buildings, set up your base defenses, put together an army, and upgrade everything so you can do all of that better. There are timers on almost everything, and while the curve is more gentle than some games, you’ll still find yourself reaching a point where you might as well just close it and forget about it for a few hours. You can and should join up with a Squad of other players so that you don’t get picked on by others, and also so that you can pick on others more effectively. If you’ve played a game of this type, you’ve seen it all before, but this time, you get some John Williams music in the background, which I’m pretty sure makes everything feel more epic and awe-inspiring. Seriously, try playing it in the background while you’re in the shower one day, or washing dishes. 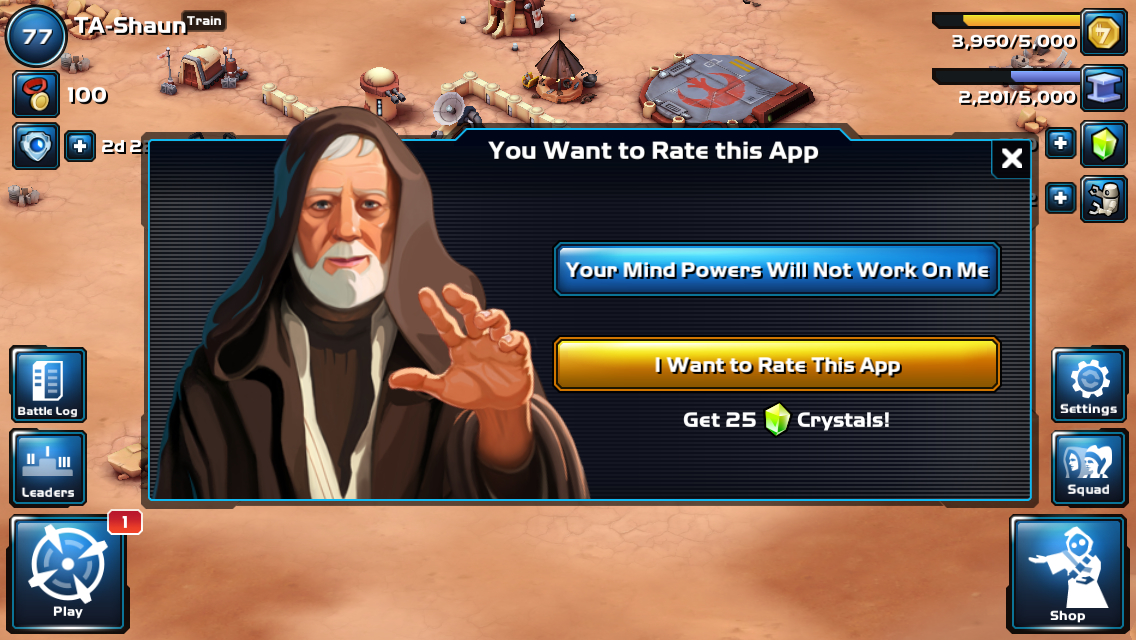 Those strong Lucasarts production values are one of the things that sets Star Wars: Commander apart from the pack. The graphics and art are good and, naturally, spot-on to how things look in the films, the music is wonderful, and there’s even a fair quantity of good voice acting, albeit all by sound-alikes of varying skill. There’s no substitute for James Earl Jones, but their Han Solo actor sounds more like Harrison Ford than the actual Harrison Ford does these days. I can’t say I feel all that good about using the likeness of Sir Alec Guiness to beg for App Store reviews, but other than that, it is good to see licensed characters looking more or less the way we remember them.

The other big point in the game’s favor is its relatively robust single-player campaign. Instead of simply just building, collecting, and building some more between multiplayer skirmishes, there’s actually a storyline to work your way through. It’s not exactly well-written stuff, but it’s enjoyable enough to play through. It also gives you a lot of practice for battles and gently guides you to build your base in a fairly sensible way. This also gives you a vital opportunity to see just how teeth-shatteringly stupid the game’s AI is before you go into battle with other players. It’s kind of mind-boggling how bad it is. Your troops will sit there taking shots at a building while enemies blast them over and over. One member in the thread in our forum said he’s seen his army attacking walls in the middle of nowhere while enemies are attacking them, and I’d believe it. There either needs to be a serious update to the AI or some sort of manual override implemented, because they’re not even dumb in a reliable way at the moment. 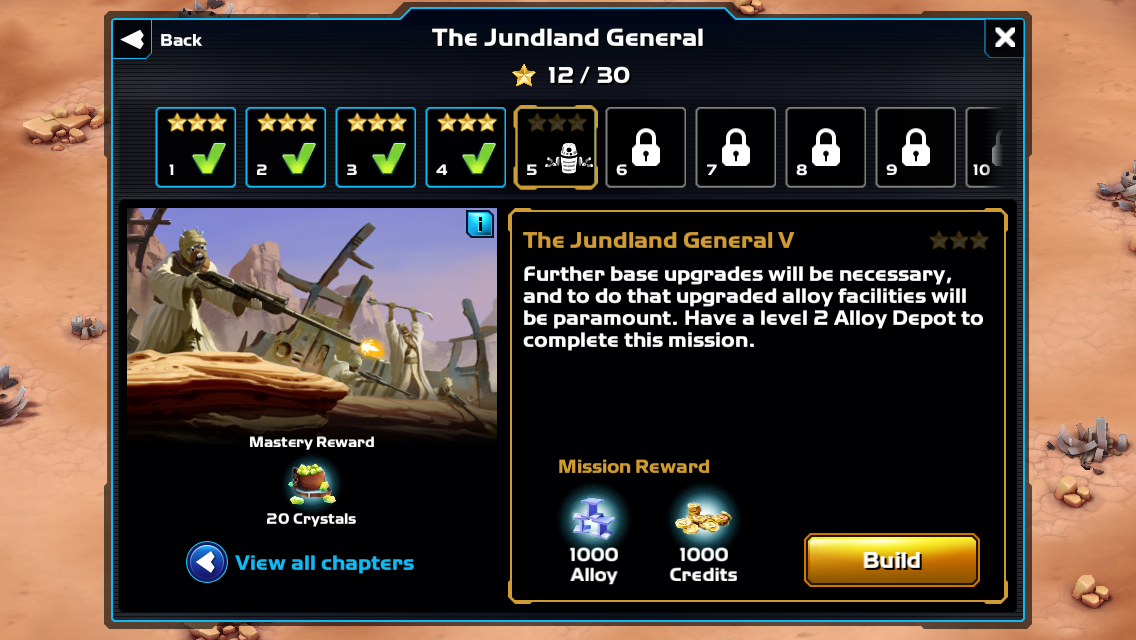 There’s not a lot more to say at this point about Star Wars: Commander. These kinds of games tend to see frequent and robust updates, so this is more a review of the starting point than wherever it will end up. At the moment, it’s a fun clone of Clash of Clans with great fanservice and idiotic AI. It has ever-increasing timers, premium currency, requires an online connection, and a bunch of other monetization tricks, just like CoC. If you hate that game, you’re not going to have more fun here, but if you enjoy it and you like Star Wars, you’re probably going to have a good time here in spite of its flaws. Time will tell if it can close the quality gap with Clash of Clans, but I have a feeling that for a great many people, it doesn’t need to.