Deep Under The Sky ($3.99) is a really fascinating game that winds up being a game that’s really fun to play – it has a variety of things to do that are enjoyable to play with in motion, the game is set up to not be frustrating to play, and it makes a lot of its premise by presenting tricky challenges to solve. It does so well at so many things, that while calling a physics-based puzzle-platformer is perhaps the closest approximation of a descriptor for the game, it’s got appeal beyond just what those words mean – and it’s just so gorgeous and well-made that it’s worth checking out no matter what.

The goal of any given level is to launch baby jellyfish from a single starting point, then using a few different abilities to help plant them at the various points throughout the levels, trying to do so in as few launches as possible, as quickly as possible, and while collecting both of the optional stars in the level. Oh, and everything is done with single taps. There are three basic mechanics that come into play: midair acceleration, dropping and rolling, and launching a grappling hook to swing from. 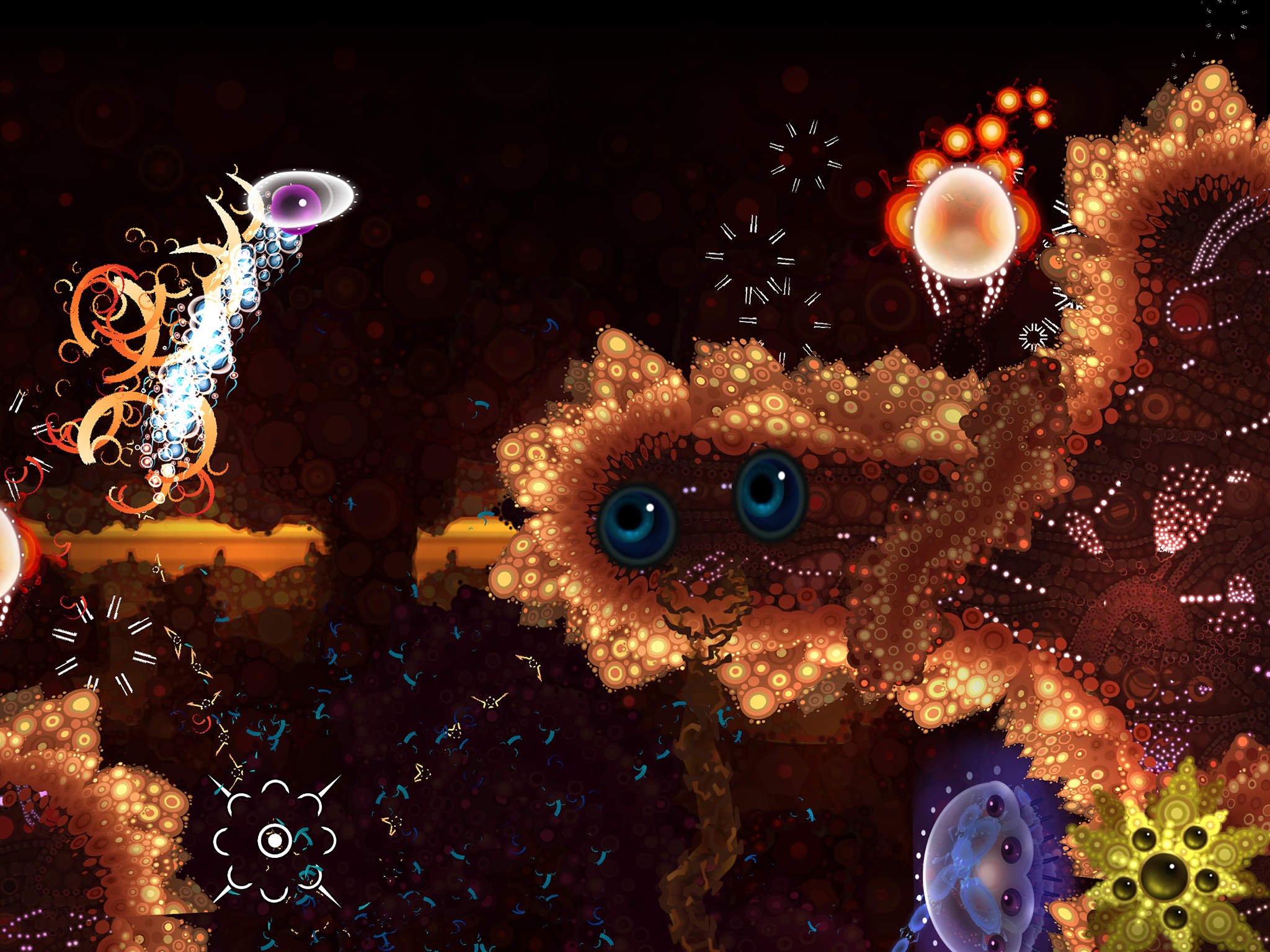 I’m not going to lie – once I saw that in the trailer for the game, I was immediately entranced. I’ve loved grappling hooks in games from Super Metroid to Rocketcat’s Super QuickHook (Free) et al. And this game has a cool use of swinging mechanics: the hook fires out in a set direction per level, including sometimes downward, which requires some different approaches to a thing I love to do in games. This goes for the boosts, too – some levels have them be in set directions, and others in the direction of the launched squid’s motion. Later levels wind up mixing all these different techniques together, such as getting a boost, then a swing, then the fertilizing explosion.

The game thus winds up being a bit of an interesting genre mishmash that I think will appeal across genres. Puzzle gamers will love it for the challenges of trying to deduce the solution to each level, includig figuring out solutions that aren’t immediately apparent. Platforming fans will love getting to try and test the limits of the jetting, swinging, and rolling. Yet, it feels so much different than any other ‘physics puzzle-platformer’ that’s out there. It’s too cerebral to be a platformer alone, too reaction-based to be a puzzle game, I guess the physics adjective works no matter what, and there’s too much originality for it to fit comfortably in the puzzle-platformer space that so many other games live in. It is its own thing. 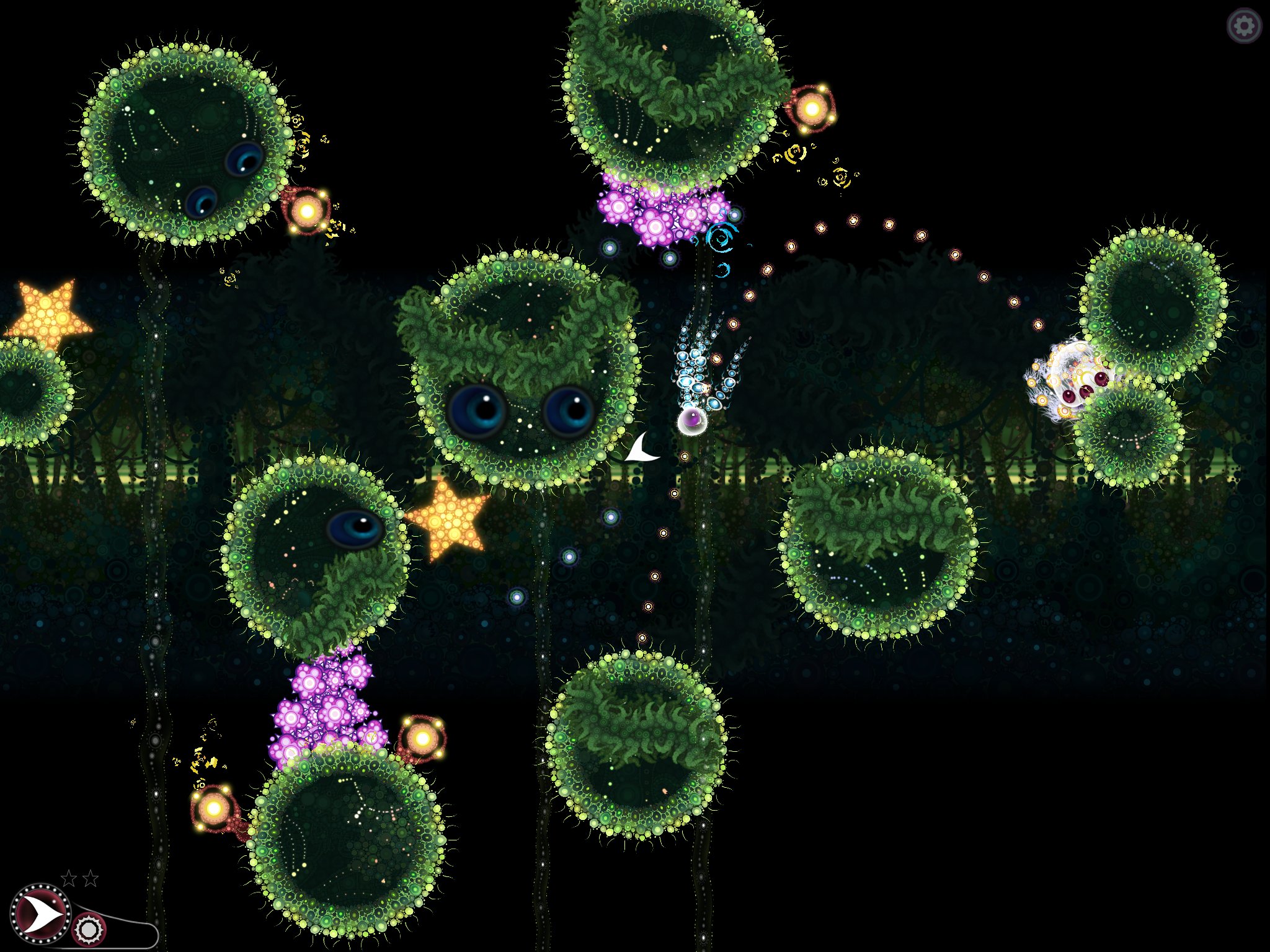 The game also deserves a lot of credit for managing to work within the one-button framework: it means that repetition is somewhat inevitable, as the starting position and order of operations stays the same, so the first few seconds of some levels can become repetitive, but that’s probably the worst sin the game commits. Well, that and a bug in the launch version where sometimes tapping outside of the icons in the lower-left corner will pause the game, but quitting the level and playing another one sometimes fixes it, or sometimes it just works, it’s a bug.

Deep Under The Sky even mitigates that small repetition by being frustration-free. It starts by not necessarily restricting players to exploring just one world: it’s possible to go to any of the four worlds and play them at any time. This is fantastic, because three of the worlds focus on the boosting, grappling, and rolling specifically, with a fourth challegning world that mixes all three together, and if you’re in the taste for something new, then you can get it. Having trouble with a level or want to see something new? Nothing is locked away!

However, the game is specifically set up to not be frustrating to where being able to skip levels is ‘necessary’, because there’s not really a failure condition for any level. Beating a level can be done in an infinite number of moves or in an infinite amount of time. While there’s Game Center support for tracking fastest total completion times in each chapter, beyond that, there’s no reason to not take as much time as necessary, and just play the game without worry. I appreciate that! Also, showing the movement path of the last launched jelly and where the activation taps were helps a lot with that repetition, if trying to hit a tight path, knowing whether to tap slightly sooner or later. This is a game meant to be played and enjoyed, with little artificial challenge.

Oh, and the game is absolutely gorgeous, its alien bio-luminescent look being extremely colorful, with an atmospheric soundtrack that’s a perfect fit for the game. It’s just the bow on a game that’s so wonderfully-made otherwise. And I hope that more content is coming: there’s plenty more that can be done with the concepts of this game. Definitely check this one out.