There really aren’t enough decent 3D platformers on the App Store. There are quite a few good side-scrolling platformers, but even the companies with IP and money behind them seem reluctant to fill the 3D gap. Maybe it’s the cost, perhaps it’s a perceived issue with controls, or it might even just be down to the waning popularity of the genre in the hobby on the whole. Whatever the reason is, it leaves an opening for a game like Angel In Danger 3D ($0.99) to make its mark. It’s not a particularly great game, and I’m not sure if it actually has even one idea to call its own, but it’s challenging, competently-made, and by default is one of the better games on iOS to ape Mario‘s 3D style.

Specifically, the game is aiming for the style of Super Mario 3D Land, Mario’s first Nintendo 3DS entry. If you’ve played the game, you probably don’t need me to tell you where Angel in Danger draws its inspiration from. It’s clear simply by looking at the screenshots. The levels are laid out in a very similar fashion to that game, though with altogether fewer tricks to them. You’ll travel through four different worlds, but the only real differences between them come down to cosmetics. As an example, in the ice world, you might expect to slip on the ice, but you won’t. 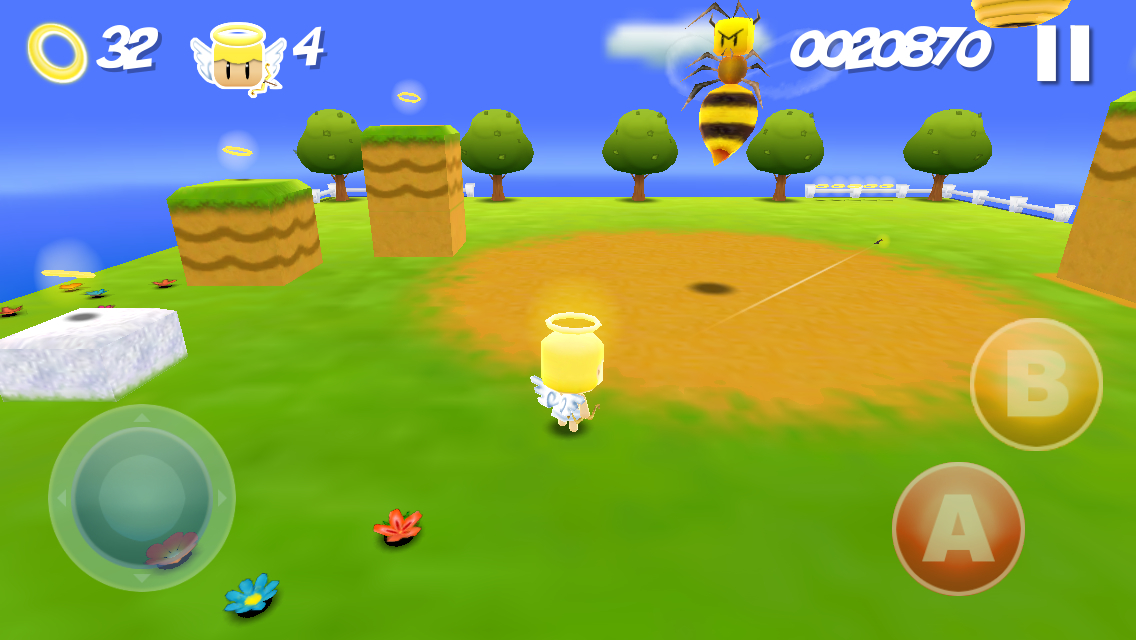 That said, there are worse things to draw inspiration on, and if Angel in Danger is copying Mario, it’s only the millionth game in history to do so. When things are working well, the game actually provides some really enjoyable 3D platforming. This is a genre that generally tries to hold your hand because of some of the stumbling blocks that are all too easily to trip over in 3D. Angel in Danger actually trusts that you can handle this stuff, avoiding any of the usual crutches like double-jumps and simplified platforming. The game isn’t afraid to throw things at you like small platforms, narrow ledges, and jumps from one moving platform to another. The enemies are also reasonably aggressive if you get close to them, and the boss fights capping off each world are satisfying.

Your cherubic character can pick up a couple of power-ups to help him out. They’re scattered fairly liberally throughout the levels, and once you’ve picked one up, you get to keep it until you die. The first one you’ll come across is a bow and arrows, which you can use to attack enemies from a distance, like Mario’s fireball. The other one is a set of wings, which allows you to tap the jump button to slow your descent from a jump, like Mario’s tanuki tail. Without your weapon, your only means of offense is to jump on the enemy’s head, though some enemies will damage you if you try this. Even with the enemies who can be hurt by it, the head-stomp is a bit of a risky move thanks to moment where the controls or collision detection fail. Luckily, the game is pretty good about giving you a bow in areas with a lot of enemies, so you’ll only rarely need to rely on that close-range attack. 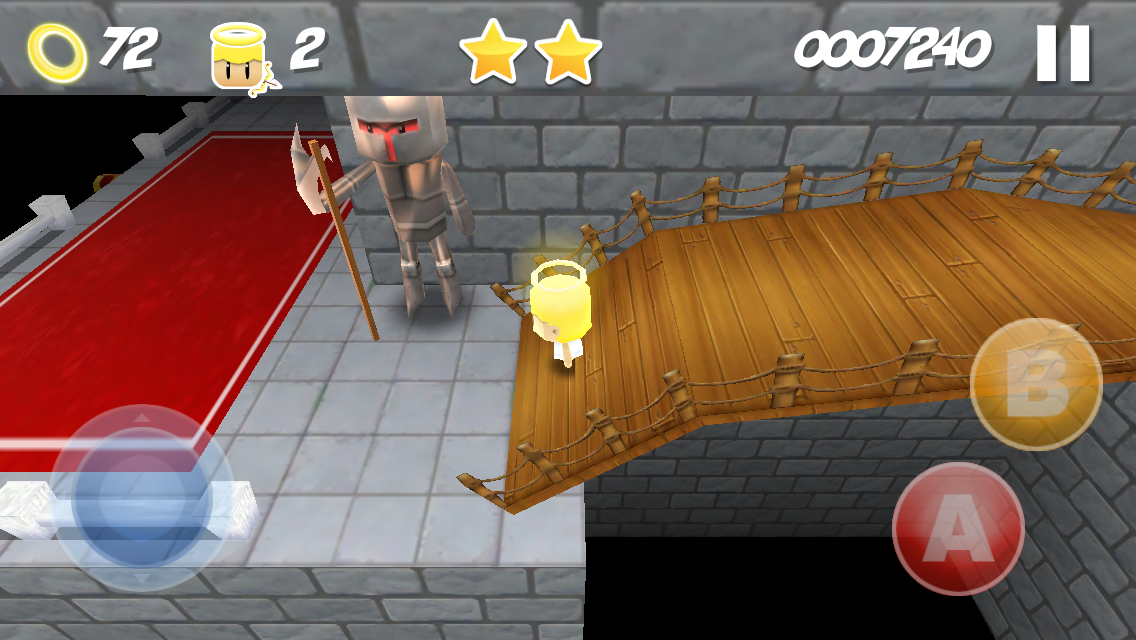 Other collectibles include hearts that give you an extra life and halos, which give you an extra life if you collect 100. Strangely, your halo count will reset if you lose a life, but not if you clear a level, so if you want to keep earning lives, you have to avoid dying. That seems to run against the purpose of that kind of system, but maybe that’s just me. There are also three stars to seek out in each level, and if you find all of them, you’ll get a chance to play the game’s slot machine. You can win lives or power-ups from it, allegedly, but I didn’t win a single time in my whole run through the game, so I guess it’s a very realistic slot machine. In general, lives are mostly meaningless in Angel in Danger. You have unlimited continues, and since there are no checkpoints in the levels, you have as much to lose by dying with extra lives in stock as you do by losing your last life. It resets your score if you continue, but that hardly seems like much of a penalty, since your score is reset anyway if the app is completely closed.

It’s probably a good thing that lives are meaningless, though, because you’re liable to lose a lot of them in pretty stupid ways. The angel can only take a single hit, and the combination of enemies surprising you by dropping from above and the sometimes-problematic collision issues means a fair few deaths you realistically had little chance of avoiding. That’s not even mentioning the rare occasions when the camera settles at an angle where you can’t properly see the action. You’re also likely to fall in quite a few bottomless pits. Your character casts a shadow, which helps quite a bit, but sometimes you have to make leaps where it’s hard to tell if the platform is beside the one you’re on, slightly to the back, more to the front, and so on. By the time you can or can’t see your shadow on the next platform, it’s too late to save yourself. If that happens near the end of one of the lengthy later levels, you’ll have to start all the way back at the start and do everything from scratch, as there are no checkpoints. 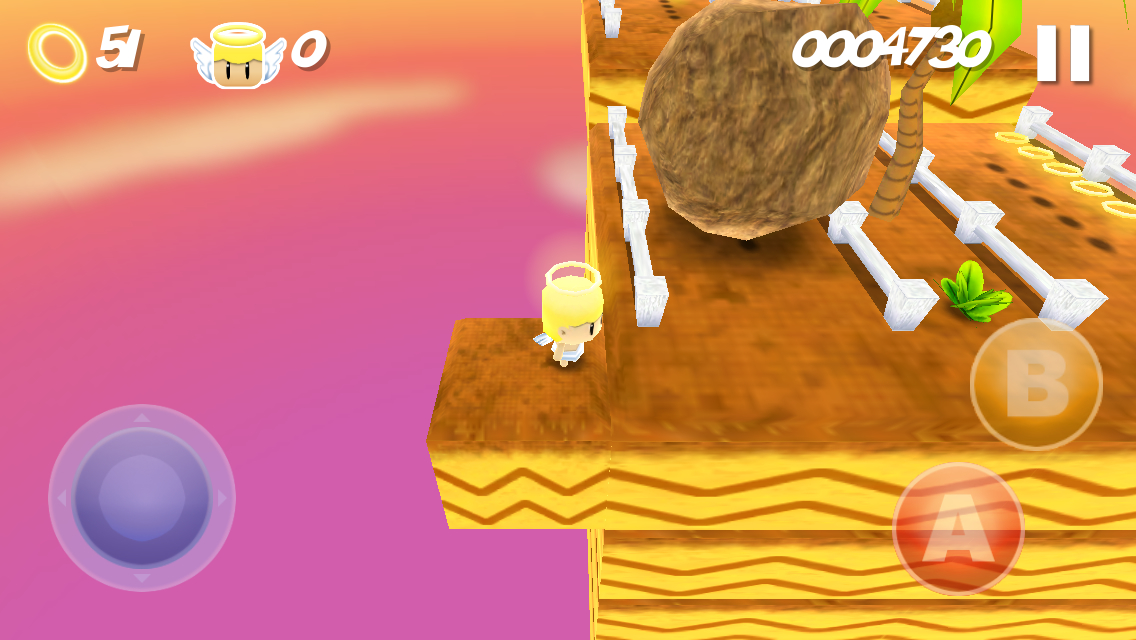 The controls are okay but they do fail from time to time. You move your character around using a virtual stick, and there are buttons for jumping and shooting. I sometimes found my thumb slipping off the stick at critical moments, such as when I was making several consecutive jumps. Similarly, it felt like the jump button sometimes didn’t respond when I was jumping near edges. It’s also a little tough getting the character positioned just right on a small platform, but that’s a problem few virtual sticks have ever found a way around. Sadly, there’s no controller support here, and it’s too bad, because the game could really benefit from it.

The game looks pretty good, with a nice variety of backgrounds and themes for the stages. The character design is a bit lifeless, but the environments do a good job of capturing that Mario feel. It also runs nice and smoothly, even when some fairly complicated structures are on-screen. The music, on the other hand, is terrible. It’s warbly, repetitive, and very short, leading to excessive looping which only hammers home how bad it is even more. There are a couple of tracks where I didn’t feel an overwhelming urge to shut off the sound, but I don’t know if anyone’s going to pop the champagne over that. The game has Game Center support for both leaderboards and achievements, though the leaderboards appear to not be functioning correctly at the time of writing. 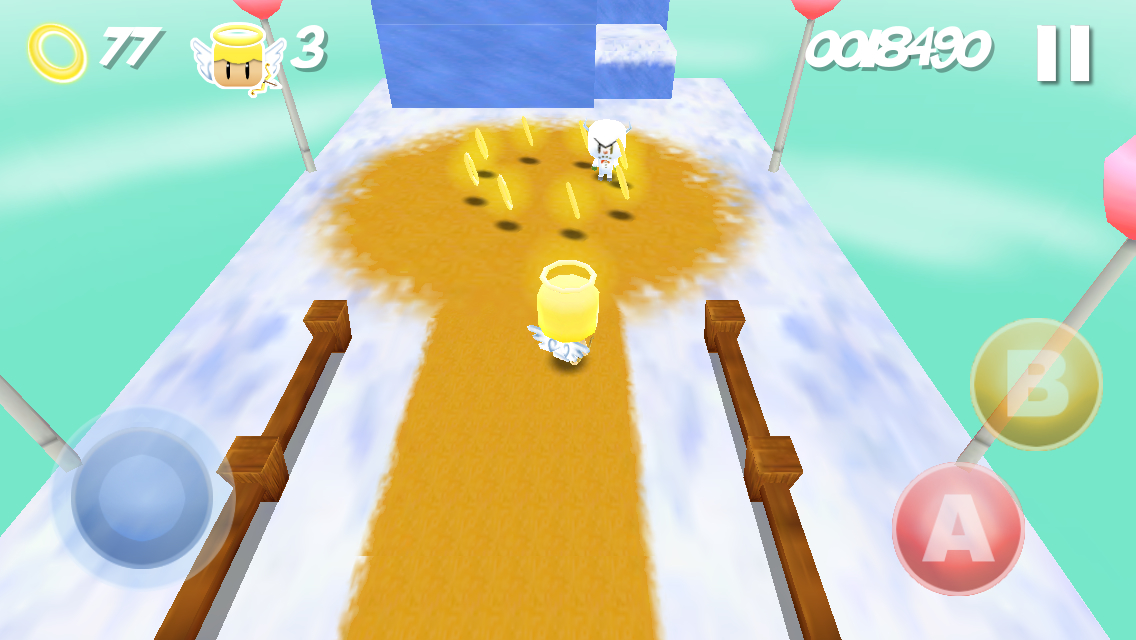 I think the best way to describe Angel in Danger is that it scratches an itch. This sort of platforming-focused 3D game is rare on the App Store, particularly one that isn’t a complete disaster. It has its share of problems, but they’re largely outshined by the things that do work. It feels just a little on the short side, with only 20 levels and four bosses, but the levels are of a decent size, so you won’t be rushing through this in a half hour for your first playthrough or anything. Naturally, there’s one of those ominous coming soon signs hanging over world five, so there might be more to come. A bit like grabbing a convenience store cheeseburger when you’re craving a gourmet burger, Angel in Danger does everything you’d expect it to do, but not quite what you might hope it does. For platform fans craving something in 3D, though, that might be enough.