LA Cops is an upcoming tactical shoot-out game that takes place in a stylish, romanticized version of the 1970s. There’s no way Kowalski, the game’s main character, gets all the way through the game without handing his gun and badge over to the Chief, glaring behind his glossy aviators. You’ve gone too far this time, Kowalski — this is coming straight from the Mayor!

Ironically, according to a milestone video featuring designer Ollie Clarke, LA Cops‘ two biggest influences—Bullfrog Entertainment’s Syndicate and Beastie Boys’ “Sabotage," products of the early ’90s. I’m of an age to remember both but LA Cops may have more modern touchstones as well: its top-down gun-blazing reminds me of Dennaton Games’ Hotline Miami while its tactical elements and flat-shaded exploration of Americana evokes Eidos Montreal’s Hitman GO.

Some exciting key takeaways: there’s a large, diverse roster of upgradeable boys (and girls) in blue, and environments seem mostly destructible (bullets penetrate glass, shotguns blast through sheetrock walls). I’m interested to see how both of these facts could be used tactically and strategically.

Some takeaways that make me nervous: LA Cops is also coming to PC, with high-level complexity to match. In other words, there’s a lot going on in this game, and I worry that touch controls might not be up to the task. Kowalski can run in one direction and shoot in another, for example, and his partner Jo Murphy can jump. 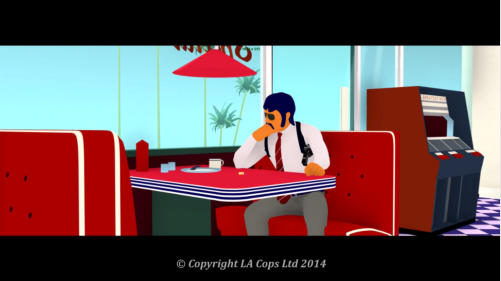 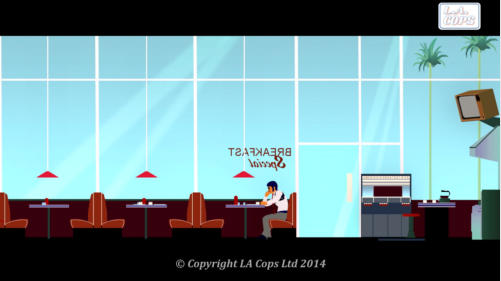 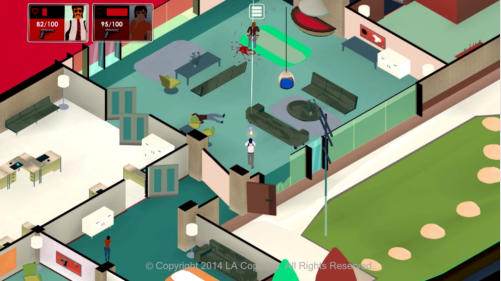 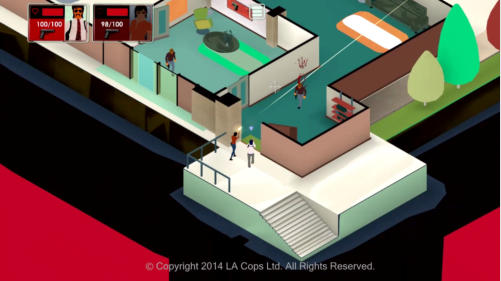 I’m sure with a bit of patience and wit, iOS players can make a slow and steady tactical plan, but fast-paced action seems a little messy. If there’s a silver-lining, however, it’s that LA Cops seems to support MFi joypads, if this recent tweet is anything to go by.

Raised eyebrows aside, the developers at Modern Dream have proven themselves adept at adapting genre fiction: they did the spy thriller in The Button Affair and campy horror in The Typing of the Dead: Overkill. There’s no reason to think that their take on campy buddy cop action—what with it’s thick mustaches and bright, floral visuals—would be any less stylish.

(Their first game, The Cat That Got the Milk, is a sharp, abstract puzzler, and it’s playable online.)

LA Cops is “coming soon," according to its website, but there’s no firm release date yet. However, according to PocketGamer, the game will run you $4.99 when it finally hits the App Store.