As soon as people hear the phrase “card game" you’ll have a massive amount of people running for the hills, which is a shame. As a big fan of deck-builders like Dominion, as well as battle games like Hearthstone, card games can be extremely entertaining if done right, and are often timeless, especially on an intuitive touch interface.

Yomi ($9.99) is a card game that has existed in physical form for some time, and now you can grab it on the iPad for $9.99 without having to juggle multiple decks and learn by way of good old fashioned paper instructions. Without pulling any punches, Yomi plays like a mixture of a fighting game and a card battler, showing the action on-screen by way of simplistic avatars that play out each choice you make. 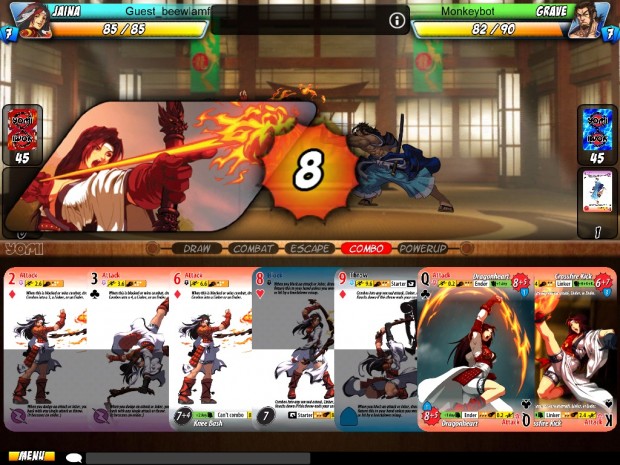 At a base level, Yomi is rock paper scissors in a one-on-one fashion, albeit a lot more complicated than the playground game. You’ll play one of the following types of cards every round — block, throw, attack, dodge. Dodges and blocks beat attacks, attacks beat throws, and throws beat blocks or dodges. Once you grasp that concept you can start to understand the more complicated facets of the game, like attack values, openers, linkers, and enders.

Just like many fighting games, combos are the key to victory in a lot of cases. Depending on the card, you’ll want to start off the combo with an opener, throw in at least a link or two, then finish them off with an ender, like an uppercut. Since each deck is astoundingly different, all attacks have their own damage value that you’ll need to assess, and it’s important to not waste high value cards if you think the enemy is going to block or dodge.

Although there’s a rock paper scissors-like system, playing cards actually feels quite strategic, as you’re not just throwing things down for the sake of it. Some cards have attacks built into a dodge, so the system isn’t entirely black or white, which gives it more of a true fighting game feel. You can read the rules for free online, the iPad version teaches you with a more in-depth tutorial that spans multiple stages. Learning on your own can be a perfectly viable option, but there’s something about a tactile tutorial interface that really speeds up the process. 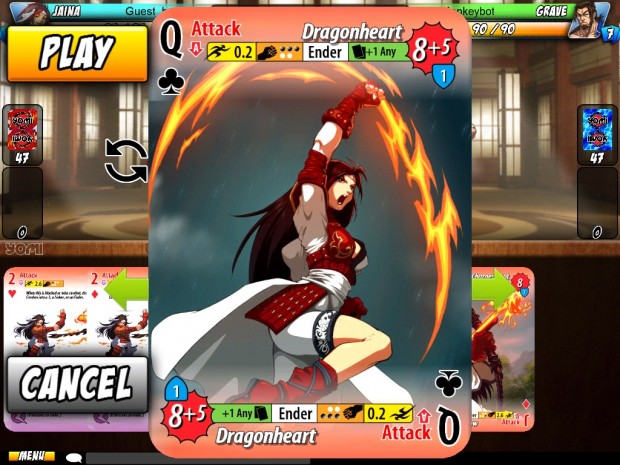 As part of the base game, you get 10 decks (characters) in all. Not only do they have different styles in the form of the decks themselves, but the characters also have latent special abilities — like the power to send cards back into your hand at the end of a turn, for instance.

From what I’ve played of all the decks, developer Sirlin Games has done a great job of making sure everything’s balanced, and just playing from the base game is plenty competitive. My only real complaint about the decks themselves is that although the cards have beautiful art depicted on them, the actual character models leave a lot to be desired with limited movement animations.

So what is there to do? Well there’s an Easy or Hard mode against the AI, a survival mode, and an online quickmatch option. Honestly I would have mostly been okay with just multiplayer, but the AI is fairly tough in that it knows how to use basic combos, which can punish you dearly if you don’t pay attention. A spectator mode is icing on the cake for new players who want to really learn how to master Yomi. It helps that you can play against others who are gaming on PC, so the community won’t die off even if lots of iPad users don’t adopt the game.

Rather than constantly guilt you into buying premium currency or some other IAP scheme, you can simply buy more decks/characters if you want for another $9.99. Although $20 for the total app may seem pricey, it’s worth the investment if you’re going to be playing. Yomi has a solid foundation to it, and any card game fanatic should dive in and give it a try.