If you’re into water physics puzzlers, H2FLOW ($1.99) by Haptix Games is the latest entry into the mix. Differentiating itself from the rest of the pack is the fusion of a few elements from other genres, making it part-action, part-puzzler with water physics tying it all together. Alas, some significant issues with controls, combined with an exceptional emphasis on difficulty may take the game beyond the typical casual audience for such puzzlers. However, endure and you’re left with a satisfying, though challenging, experience.

Combing elements from a few different genres, H2FLOW’s gameplay isn’t quite what one might be expecting if they are familiar with previous physics-based games with water. Yes, there are dozens of missions and they all involve guiding a flow of water towards an exit drain. However, rather than simply placing platforms and mechanisms to guide the flow in an omnipotent fashion (like, say Enigmo), you’re actually guiding a cute little dragon around the map and having him launch bombs, build bridges and throw barriers. Thus, in order to launch a bomb or build  a platform you actually have to get your dragon to that spot before you can even do anything. It certainly adds a different element to the mix. 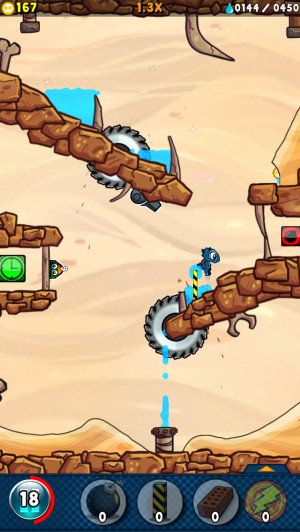 This combination makes H2FLOW one of the toughest puzzle games that I’ve played in awhile. While the variety of tools at your disposal (as well as the inclusion of destructible environments) means that there’s always a possibility of alternate methods to complete a level, most have an obvious means in mind for completion. Regardless, each level involves analyzing all the platforms, pratfalls and power-up collectibles in the level, formulating a priority system and when and where to go in the level, what tools to use, and with what timing. Finally, since all the action involves maneuvering your dragon, the final piece is to get him wherever he needs to go to implement your plan. It’s this last part where H2FLOW falters.

Even after spending a decent amount of time with the game, I just couldn’t get used to the controls. Sure, controlling your dragon is as simple as tapping to move, and launching bombs and barriers is as simple as tapping a button but even those elements had issues from a controls standpoint. There’s no patching AI with movement, so if your avatar bumps into anything while moving directly to the area you tapped, he instantly stops and waits for a new movement command. Also, collision detection is a bit iffy, with the game thinking I’ve hit a wall when I’m pretty sure I didn’t. Finally, there’s no way to control the power and direction of launching items, so you just need to be in the right place and direction to get it right. Unfortunately, the above issues with simple movement means it’s tough to get to that point.

H2FLOW offers supplemental power-ups that provide some assistance in making a mission easier that require currency to purchase that’s earned in-game (and can also be purchased via IAP). While I didn’t have an issue with the IAP options, I thought it was a bit odd that some of the power-ups seemed centered around temporarily addressing some of the issues I noted above (for example, instant teleportation instead of having to deal with movement and collision detection). While I’m not a fan of requiring these sorts of purchases to pass a level, admittedly there should be enough currency to go around with normal replays to pick up what you need.

Control and power-up issues aside, H2FLOW’s penchant for challenging levels is something that I can really appreciate it. Sure, the gameplay borders on frustrating at times, but it’s refreshing to see a game that holds little back in terms of raw difficulty. If you’re looking for a challenge and can handle some pretty tough water physics puzzles, by all means check out H2FLOW.