Erwin Rommel, also known as the Desert Fox, has got to be one of the more interesting figures of World War 2. For starters, he’s a well-regarded man in spite of fighting for Nazi Germany in the war, a rare enough achievement for him to gain distinction on alone. He was an incredibly skilled military commander, demonstrating an uncanny level of strategy, especially in the challenging desert climates of North Africa. His conscience was such that his ultimate downfall only came about because he was part of the plot to assassinate Adolf Hitler, and even after being discovered, he was allowed to die with some dignity, with his family’s safety assured. He was beloved by the people of Germany, highly respected by his enemies, and overall quite the military genius. For those reasons, and more, the world has seen fit to give him one of our highest awards: video games based on him and his exploits.

In fact, Erwin Rommel is probably the only reason we have as many games as we do about the North African front of World War 2. It’s hardly the most well-known or glamorized part of that war, with attention focused for obvious reasons on Europe and the Pacific. The most famous thing related to that conflict is the Desert Fox himself. Still, it’s quite an interesting scenario to sink your strategic teeth into, and that’s exactly what Shenandoah Studio’s newest installment in their Crisis in Command series allows you to do. In Desert Fox ($9.99), you take the role of either the Axis or the Commonwealth in the Battle of El Alamein, a critical campaign where Rommel was trying to push his way through Commonwealth forces to reach Egypt. The harsh desert climate resulted in bigger supply problems than the Wii’s first Christmas, which ultimately led to history as we know it, where Rommel ended up withdrawing his forces. This game gives you the chance to uphold history or defy it as you see fit. 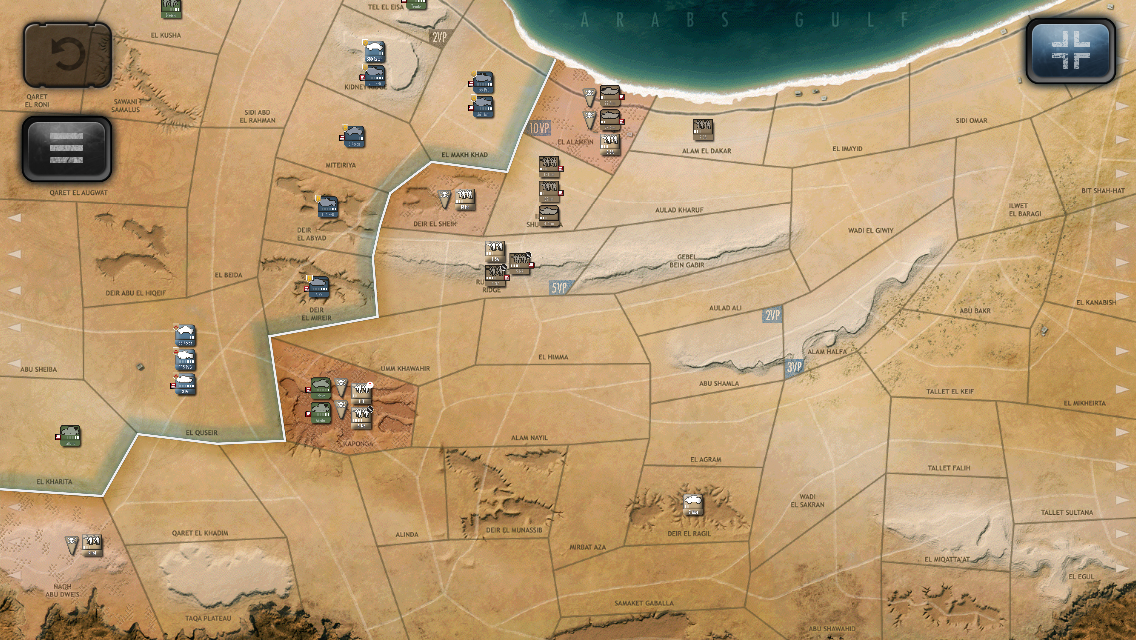 If you’ve played either of the previous games in this series, Battle of the Bulge ($9.99) or Drive On Moscow ($9.99), the broad picture hasn’t changed much in Desert Fox. It’s still a turn-based strategy game that takes a board game-like approach to its gameplay and aesthetics. You win by performing certain tasks that earn you Victory Points. You can play against the computer, locally with a friend, or over the Internet, and while the game prioritizes historical accuracy over symmetric balance, you’ll find either side of the conflict offers a good, fair challenge overall. The extremely clever impulse system returns, allowing a turn-based game to enjoy many of the benefits of a real-time one while simultaneously reducing the intimidation factor a lot of war simulation games carry. There is also a wealth of historical information scattered throughout the game, so you can learn something while you play.

As with Drive On Moscow, the differences from earlier games are few but significant. Most obviously, there’s a whole new map to play on, and it’s really something. It doesn’t feel as big as the map in the last game, and it’s certainly not very colorful given the desert setting, but the strategic potential in it is huge. Depending on which side you’re playing, your goals are going to be a little bit different. The Axis side can win by securing enough Victory Points or by sending enough units off the eastern side of the map towards Egypt. There are plenty of routes to take, giving you a lot of options in your strategy. Conversely, the Commonwealth side has to prevent Nazi forces from breaking through and exiting the map, so if you choose that side, you’re in for more of a defensive game. Both sides offer two smaller scenarios in addition to the main campaign, with the smaller scenarios offering up more chances for Victory Points and consisting of fewer turns. They’re a good way to practice up for the real thing. 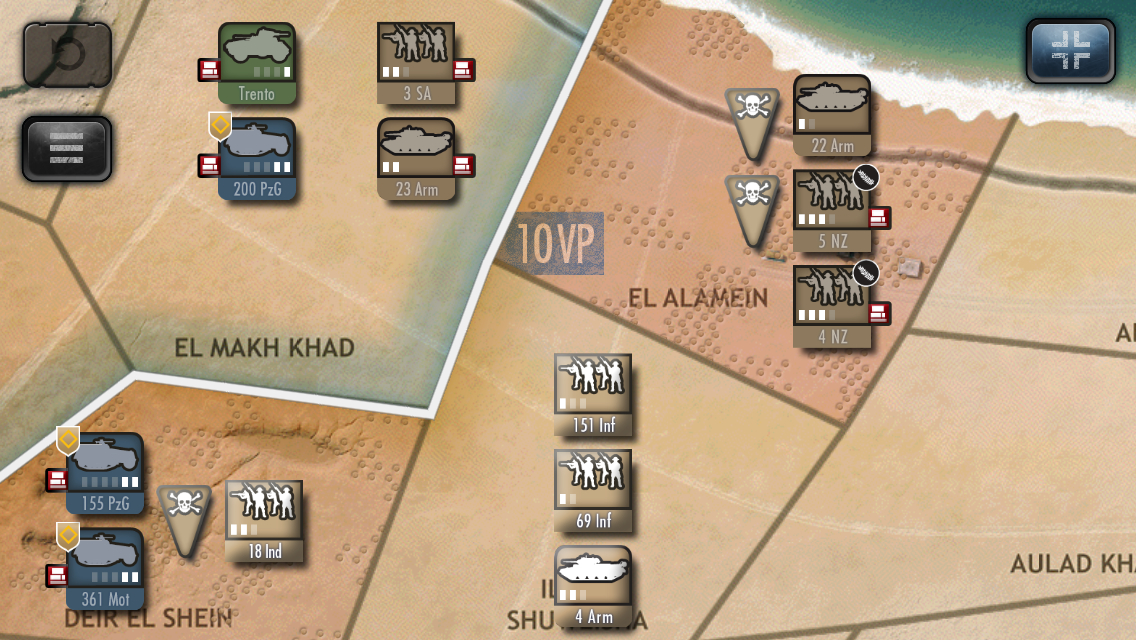 In reality, this conflict was decided by supplies, or a lack thereof, and Desert Fox does a fantastic job of recreating that situation with its new supply rules. Not only can you have your supply lines cut off if you don’t have a direct line back to your side of the map, but after each turn, randomly selected units will simply run out of supplies due to the desert conditions. In this game, a unit without supplies can still move one space and fight, but it’s severely handicapped. You’re also not guaranteed a resupply after each turn. You can choose a few units that will be guaranteed to get their supplies, but the others are at the whims of the RNG gods, and they can be cruel at times. This might sound a little unfair for a strategy game, but it affects both sides equally, and the strategy comes in choosing which of your units get the guaranteed supplies. You have to assume that any unit you do not grant this favor to will be left with nothing and work from there.

The other major change is the addition of mines. At the start of each turn, you can choose to take the offensive initiative or go on the defensive.  If you choose the latter, you can lay out mines on spaces you occupy, and they behave pretty much like stationary units in battle. Mines can only be taken out by certain units, and are pretty useful for protecting areas while you move your forces elsewhere. From an offensive point of view, this forces you to use new strategies, changing the way you play compared to previous games. It also means that you can shore up defenses well beyond what you could before, so you need to move fast if you want to keep your opponent from digging in on a critical space. 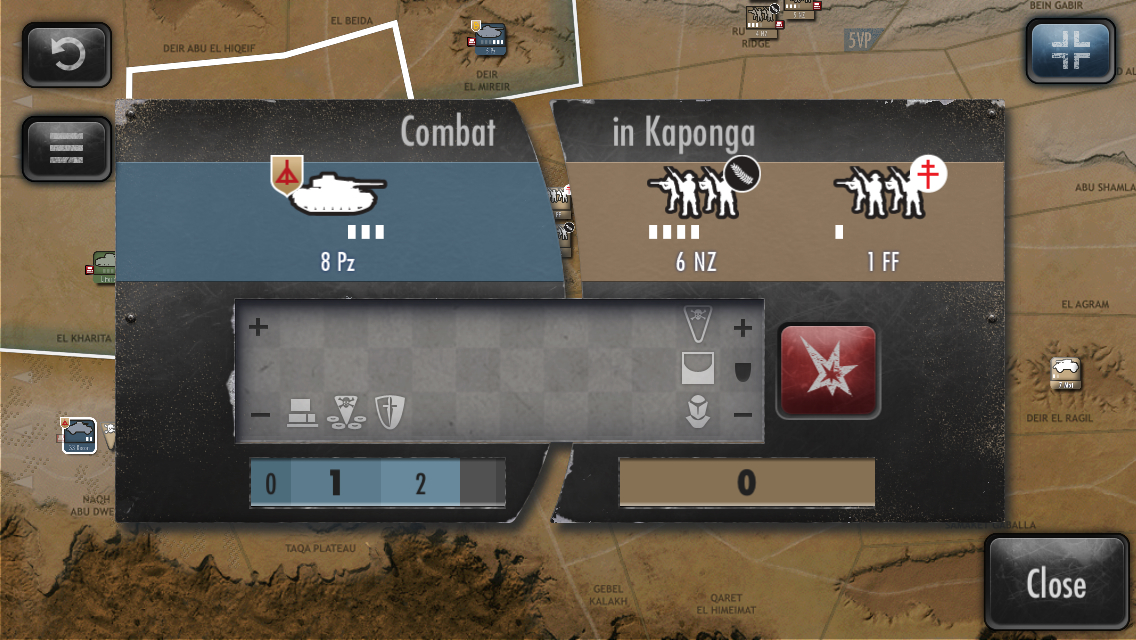 Now, I’ll be honest with you guys. I’m no grognard. I like strategy games, and I’ve certainly been playing more of them recently than I have in quite some time, but I’d say I represent a far more casual type of player than a game like this often attracts. I think Desert Fox is a lot of fun and accessible in the same ways as the previous games in this series, but I don’t feel confident saying with authority if the AI issues people found in the first version of Drive On Moscow have been corrected here. The game offers up three different AI personalities for each side, and I found even the apparent weakest of the lot put up a pretty good fight. They occasionally make less-than-optimal moves, but I assume that’s so a human actually has a chance of winning. This game is basically a video board game, so it goes without saying that it’s more fun playing against a similarly-skilled human opponent, but I had a lot of fun going up against the computer, too. If the AI is somehow broken, I never noticed it.

Generally, I feel that Desert Fox demonstrates all of the same strengths as the earlier games. It’s very easy to learn, has a great tutorial, but also offers up a huge amount of strategic possibilities, ensuring that no two games will play out quite the same way. It has a beautiful, clean style to it, with great audio design that helps establish the mood beyond the slightly abstract visuals. The UI is extremely intuitive and looks great. I also have to applaud the way the gameplay has been slightly changed to make the game as true to history as possible. You need a different gameplan here, and after two fairly similar games, that’s a good thing. With all of that said, it’s still part of the same series, so there is a great degree of familiarity to it if you’ve played the prior games. 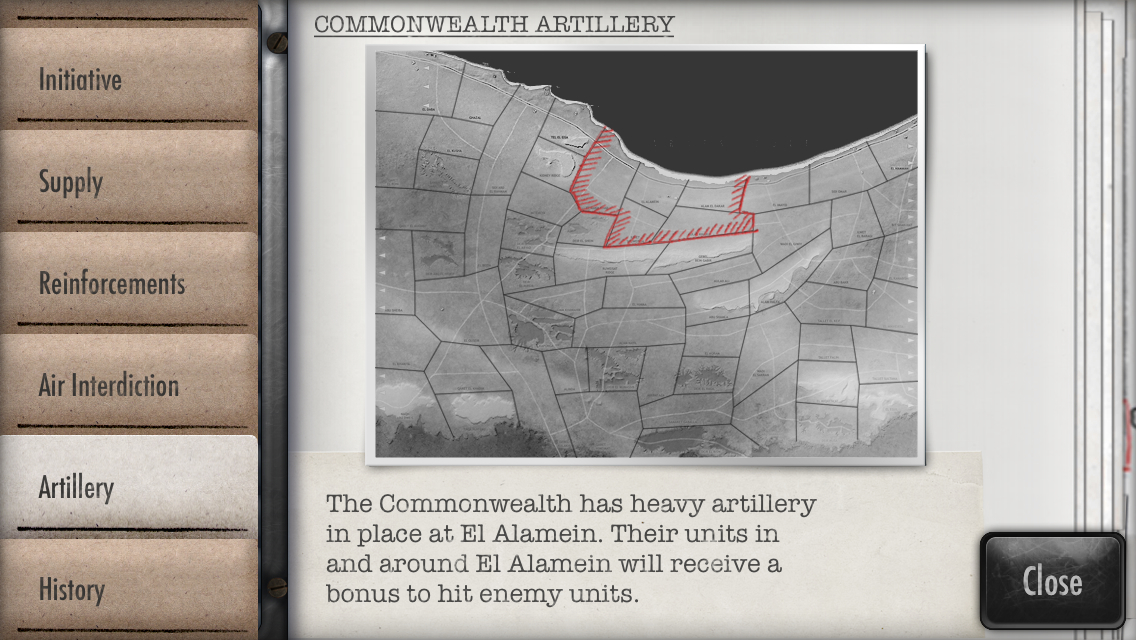 If you’re coming into the series fresh right now, I think I would probably recommend Battle of the Bulge ahead of this game. If you enjoy that game’s mechanics and are looking for a different scenario, Desert Fox is more than worth your time and money. I think it’s a much stronger installment than Drive On Moscow, even though I tend to prefer games based on that conflict. While the price might seem a little high relative to other games on the App Store, if you’re into strategy games, it’s a great value for what you get, especially if you are familiar with or have memories of the cost of a physical board game in this genre. There is, naturally, not a single IAP to be found in it, either. It’s another bang-up job by the good people at Shenandoah Studio, and it leaves me eager to see which battle they tackle next.