There are many things you could accuse the Trese Brothers, developers of Star Traders 4X: Empires in Exile (Free) of with regards to how they handle their games. You can’t ever say that they lack ambition or industriousness, however, and that has never been more apparent than with this latest release. Although most of their past mobile work has been for Android mobile devices, the Trese Brothers have released two games before this on iOS. Their first release, a couple of years ago, was Star Traders RPG (Free), a sci-fi themed trading game with an impressive amount of universe lore. Then, several months ago, they released Heroes of Steel RPG (Free), an interesting turn-based strategy RPG that again featured an impressive amount of world-building. Both games were in many ways too deep for their own good at times, and both were pretty rough around the edges at release. On the positive side, both have received a mind-boggling amount of updates in response to player feedback.

Well, with all of that great lore built, I’m glad to see the developers are coming back around to those universes they created. Star Traders 4X: Empires in Exile is, as it says in the title, a game in the 4X genre. A 4X game is a type of strategy game that revolves around exploring, expanding, exploiting, and exterminating, and if you’ve ever played Civilization, Master of Orion, or even the Total War series, you’ll have most of the picture. Basically, you’ll build an empire, gather resources, manage finances, raise a military, explore tech trees, make treaties, break treaties, try to keep your people happy, and fight off any invading forces. These games run really deep, and I know plenty of people whose entire gaming hobby is satisfied by just one or two of them. It’s an incredibly daunting genre to take on, and yet, it feels very right for this developer. 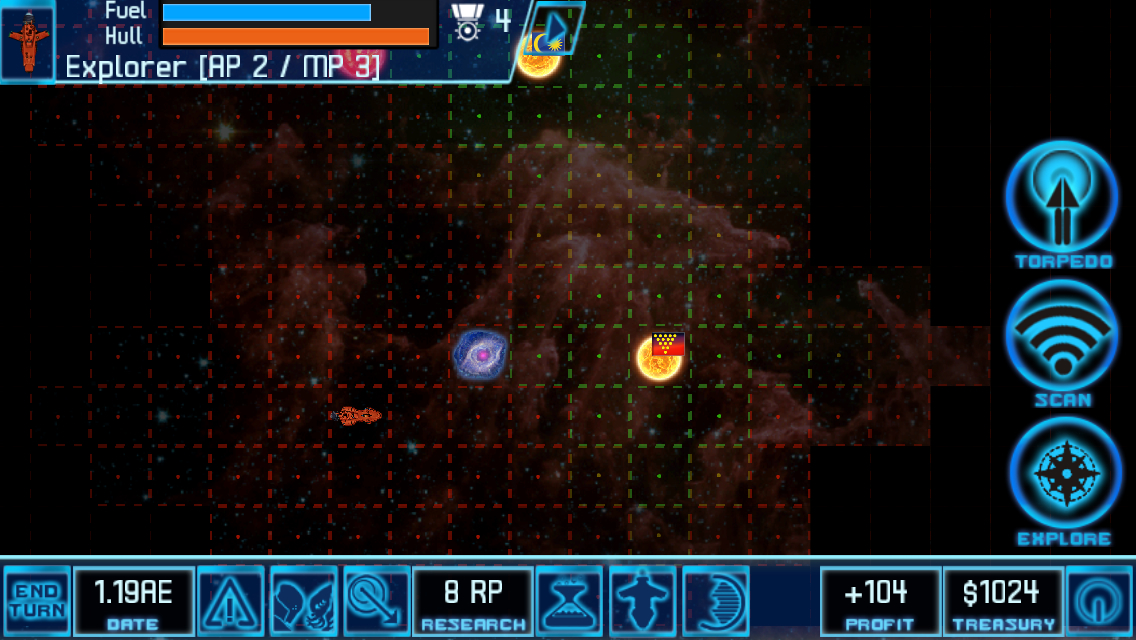 This genre is of course very popular on mobiles, but most of the titles released are free-to-play, heavily-streamlined social experiences that, in my opinion, entirely miss out on what the 4X genre is really all about. That said, the premium space isn’t without competition, even limiting ourselves to the sci-fi theme. The iOS platform is home to Ascendancy ($6.99), Spaceward Ho! ($4.99), and the excellent Starbase Orion ($7.99), with the latter in particular doing a great job at being the only 4X game most iOS gamers ever need. The point I’m trying to make is that it’s not an easy thing to break into, but attempting that kind of scenario is almost as much a calling card of the Trese Brothers as updating every other week is.

As you’d expect, Star Traders 4X builds on the universe set up in the original Star Traders. While the first game cast you in the role of a privateer trying to make a profit, and survive doing it, in the middle of a universe at war, in this game you play a rather different role. You’re the leader of the last scraps of humanity, who have traveled for 100 years to arrive at a remote point where they hope to rebuild. You still have a few ships left from the old times, but the knowledge of how to build them has been lost to your people. You have just enough to get things going again in a few different solar systems, which will hopefully serve as the bedrock for your galactic empire. Your first step is to set up colonies and secure some resources. Naturally, once people break into groups, their next step is to start hating and envying the other groups, so you’ll have to take care of that, too. Just in case basic survival and internal fighting wasn’t enough to keep you busy, you’ll also get a visit from the neighbors pretty quickly, and they’re after more than a cup of sugar. Just another day in the life of a budding emperor, I suppose. 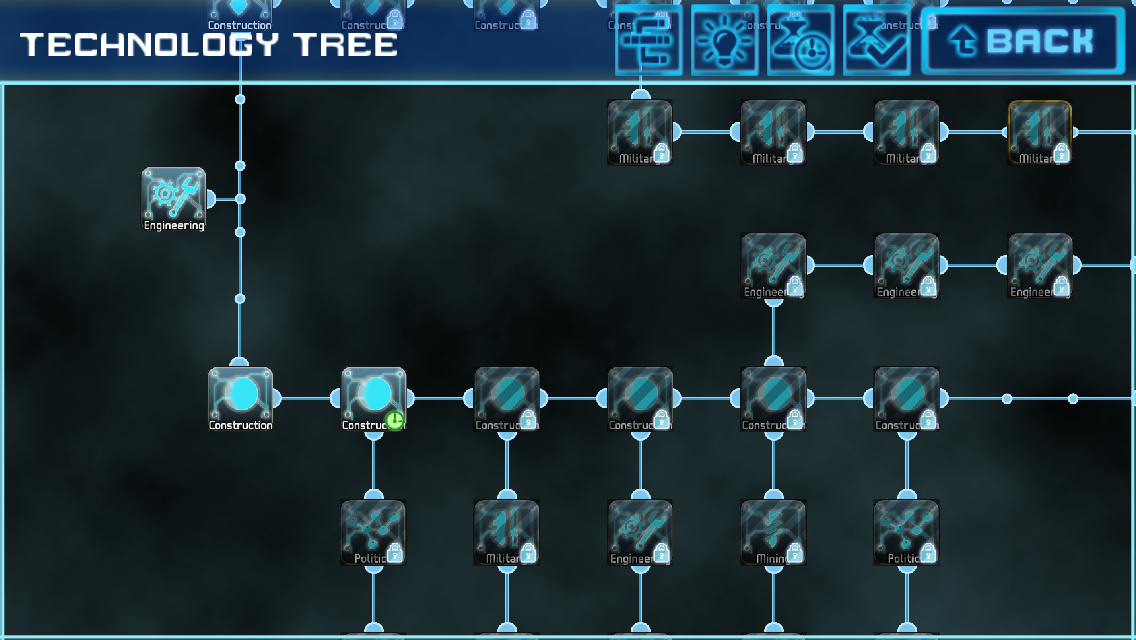 In true fashion for this developer, there’s a lot going on in Star Traders 4X, and virtually none of it is explained very well. There’s a tutorial map that ostensibly teaches you how the game works, but I had a real bear of a time coming to terms with the game until I delved into the in-game library area and watched a couple of videos the developer made, one of which I’ll place in this review just to save you guys the hassle. If you haven’t played a 4X game before, or perhaps worse, have played a 4X game before, you’re going to want to watch it to learn how to play this game specifically. In older days, this kind of game would come with a manual the size of an average novel, which helped compensate if the game lacked a decent tutorial, but some things just don’t fit through the winding tubes of the Internet. The initial confusion is particularly a problem here because the AI aliens will come in fast and hard, even on the opening map on normal difficulty. Just choose the easy setting to start off with, trust me.

Another familiar problem is the user interface, which is extremely complicated, as poorly explained as everything else, and on the iPhone’s screen, very busy. It felt like moving my ships and performing actions was taking too many taps, while finishing my turn could accidentally happen in just one errant touch at the corner of the screen. Once you know what everything does and the way things work, it’s not that bad. You can certainly get used to it. It’s simply another example from a game that makes a very confusing first impression.

Those are actually my main complaints with Star Traders 4X. I’ve spent a lot of hours playing, and after that initial period where I had no idea what I was doing, the game started to become really enjoyable. I wasn’t a big fan of the art and writing in Heroes of Steel, but the style of both fits this universe like a glove. The tech research tree is huge and will light up the eyes of any fan of the genre, there are lots of ship customization options, and the variety of difficulty settings ensures there’s a reasonable challenge here for almost anyone. You get 12 different maps to choose from in the Elite version of the game, varying in size and density of planets, and when the game says a map is huge, it’s huge.

For those playing the free version, you can try out the first two maps to get a feel for the game before deciding whether or not you want to spend the $4.99 to upgrade to the full Elite version. That version also offers you more difficulty settings, a larger tech tree to play with, an entirely different set of factions to deal with in your empire, and more enemies. It’s definitely worth upgrading if you’re enjoying yourself with the free version, and that upgrade to Elite represents the only IAP in the game. If you just buy the Elite version right away, you get all of that to start with, with the versions otherwise being identical. I don’t know if this game really shows its true colors with a quick taste, but it’s nice that the option is there for those who want it. 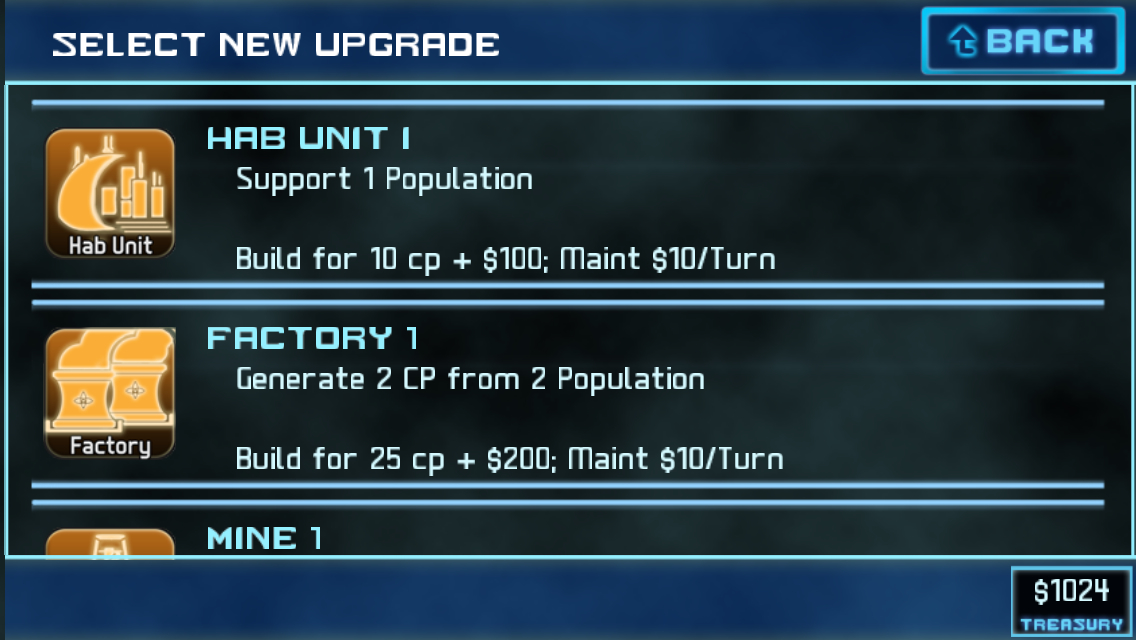 Star Traders 4X is an incredibly complex game that suffers from weak documentation and a confusing initial play period. The UI is busy and helpful things are buried deep. If you give it time and learn its idiosyncrasies, you’ll find a really strong first stab at the 4X genre with a few problems that hold it back from being on the same level as something like Starbase Orion. It’s also a single-player only experience, lacking the multiplayer found in some of its peers. This game is not going to be for everyone, but strategy fans who are patient with its faults will find quite a bit to love here, and knowing this developer, we can expect it to improve greatly with time.