I was a bit surprised by this latest release from Kairosoft, makers of the hit simulation Game Dev Story ($4.99). Not by the game itself, mind you, since this is right off the assembly line in every way, shape, and form. No, I was surprised by Pocket Harvest ($4.99) because I really thought Kairosoft had done a farming game before. I guess it’s because farming and rustic settings have been regular elements of many of their games. This is their first pure farming game, but it has been shoehorned into Kairosoft’s most familiar template, creating a game that is one of their least appealing to date. The most common criticism of this developer’s games is how much they tend to recycle, but at least with titles like World Cruise Story ($5.99) or Sushi Spinnery ($4.99), the settings are unique even if the mechanics are very familiar. Pocket Harvest doesn’t even have that going for it, unfortunately.

In this game, you’re tasked with creating a successful farm, which, as it turns out, entails not only growing and selling produce, but also running a successful tourism business. It’s pretty clear that the tourism bit is included so Kairosoft can re-use their usual mechanics, because setting up a farm as a tourist destination is only slightly less strange in concept than having students farming at an elite private academy. The farming in Pocket Harvest is slightly more involved than it has been in prior games from this developer, but the end result is essentially the same game as several others in their back catalog. Raise up crops to sell or enter into contests, place new buildings to generate extra income from tourists or open up new things to build, research new buildings, items, and other boosts, and try to become the number one farm around within a set amount of time. 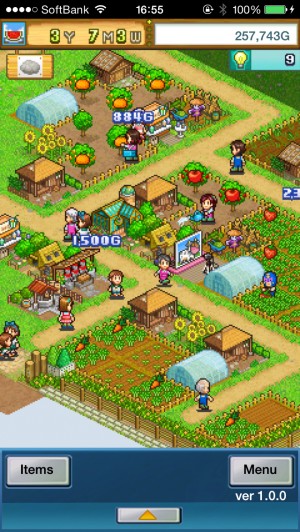 As usual, it’s a roller coaster ride to inevitable victory. You may not quite make it to number one before the limit, but you will constantly see improvements in your standing, and if you choose to hang in there after the deadline, you will reach number one at some point. In many of Kairosoft’s other building simulations, the routine is shaken up a bit with some sort of segment away from your site, such as the racing in Pocket Stables ($5.99) or the away missions in Epic Astro Story ($4.99). In Pocket Harvest, you only have the contests, where you select one of your crops and watch an overly long scene to find out if you’ve got the best of the bunch. It lacks the tension and excitement of some of their other games, and it’s quite a pity, because this game really needs any help it can get.

As you play, the same old lineup of wacky characters will show up here and there, along with many of the same building types and gameplay routines. You’ve got your combos where certain buildings yield better results when placed beside each other, your research projects that open up new things, your workers whose stats can be improved by using items, missions that require you to collect a certain type and amount of crop within a set amount of time, land extensions you can buy after certain conditions are met, research points you can spend to try to improve your crops, and so on. If you’ve been following this developer, you could probably do this game in your sleep.

You don’t need me to tell you that there aren’t any new mechanics in this game, though. You also likely don’t need me to tell you that the graphics are literally the same as what you’ve seen in other games from this developer, or that the music, sound effects, UI, and just about anything you can think of is a direct carry-over. At least with those other games, though, they could survive on novelty. I can honestly say I have never played a better sim about running my own hot spring than Hot Springs Story ($5.99). Sushi Spinnery is the finest revolving sushi restaurant builder I’ve ever laid my hands on. Farming, on the other hand, is one of the most frequent topics for simulation games, and that leaves Pocket Harvest in something of a pinch. Nothing about this game offers anything interesting or unique. 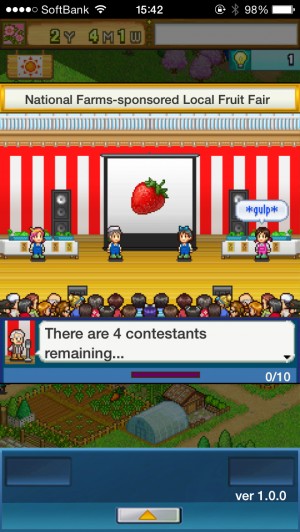 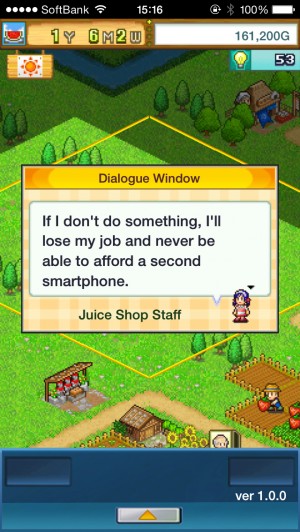 It’s all very well-made, and it’s still a fun, solid experience with a lot of charm. As I say a lot when reviewing Kairosoft’s games, if this is your first go-around with their brand, you’re going to have a great time building things, seeing all the wacky characters who show up, and feeling pretty good about your steady improvement. If you have more than a couple of their releases under your belt, however, Pocket Harvest‘s mind-numbing lack of ambition is almost depressing to behold. I can think of so many better ways to spend five dollars on the App Store, even if you limit yourself to Kairosoft’s games. I really want to see this developer step their game up again sometime, but I’ve nearly run out of hope and interest at this point.