Lisa Bromiel and Dan FitzGerald are the two-person team from Chicago-based Trichotomy Games, and they’re making a game about dogsledding. If the idea of throwing biscuits to a team of pixelated malamutes isn’t immediately exciting, maybe reading Brian Phillips’ 20,000-word opus about the beauty, drama, and danger of the annual Iditarod Trail Sled Dog Race will perk you up. Either way, check out Dog Sled Saga. 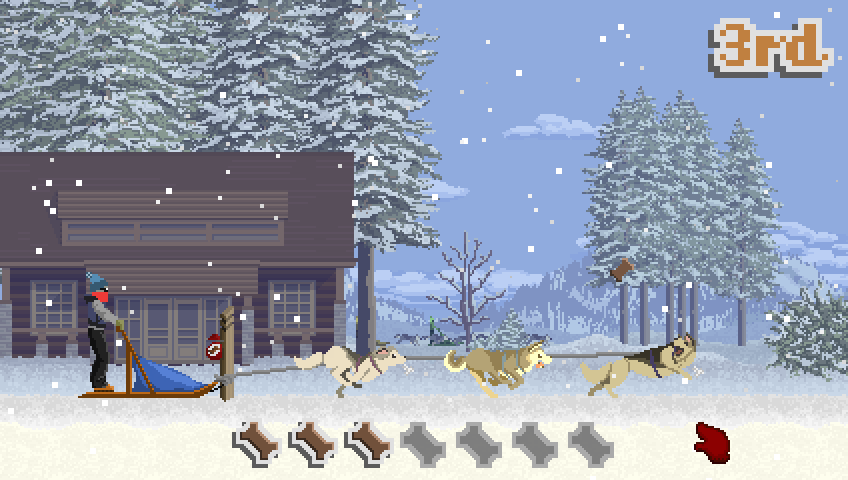 At its most basic, Dog Sled Saga is a sports management sim: well-fed dogs are happy dogs, and happy dogs are fast dogs. Your job as benevolent taskmaster will be to hire new dogs, manage rest times, pay league dues, and guide your canine compatriots to victory. Here’s the wrinkle: different dogs have different traits and personalities, and the crux of the game will be sussing out which dogs are best suited for different roles on the line. Lucy, for example, is a “strong" husky that’s good at catching mid-race treats to keep her endurance up.

“I would boil it down to the non-verbal pet relationship," FitzGerald told Polygon last year. “It is absolutely about getting familiar with an animal that can’t talk to you. There won’t be a lot of pop-ups that tell you about your dog, but there will be signs — [this dog] is clearly running slower, so he is struggling and I need to feed him. In the race, it takes the form of your run animation and their breathing."

Meanwhile, the actual races involve hurdling obstacles, throwing Milk Bones in long, parabolic arcs at your dogs, and using their special abilities at opportune times. Smitford the German Shepard, for example, is “competitive": seeing an opposing racer triggers a speed boost, which could affect how you dole out food for the next leg of the race.

Lastly, there’s a “fame" mechanic at play, too: hurdling obstacles and winning races will make your pups popular, which could lead to endorsements and sponsorships.

FitzGerald and Bromiel actually funded the game on Kickstarter over a year ago and have (presumably) been working ever since. Mum’s the word on a date for the iOS release, but Dog Sled Saga has already made it through the Steam Greenlight meat-grinder, and a playable beta has been offered to Early Access buyers. At the very least, Dog Sled Saga exists in the wild, and we’ll keep you apprised of new info as we (hopefully) move closer to a release date.