A 16 bit action platformer come endless runner, Bill Killem (Free) focuses on a movie star hero who’s out to kick some alien butt. When they destroy his movie premiere, he decides to take vengeance in the only way he knows best, guns and hellfire. The game itself is an interesting pixel-driven storyline full of unique twists, and thankfully, despite it’s free-to-play model, doesn’t require any additional spend to really get stuck in.

A classic spin on an endless runner, Bill Killem relies on players integrity and perseverance in order to collect as many coins as possible and cause as much destruction as necessary in order to advance throughout an endless stream of randomly generated levels. If you happen to die along the way, continuing will cost you a small handful of coins, but each subsequent death will escalate an extra 50% thereafter. 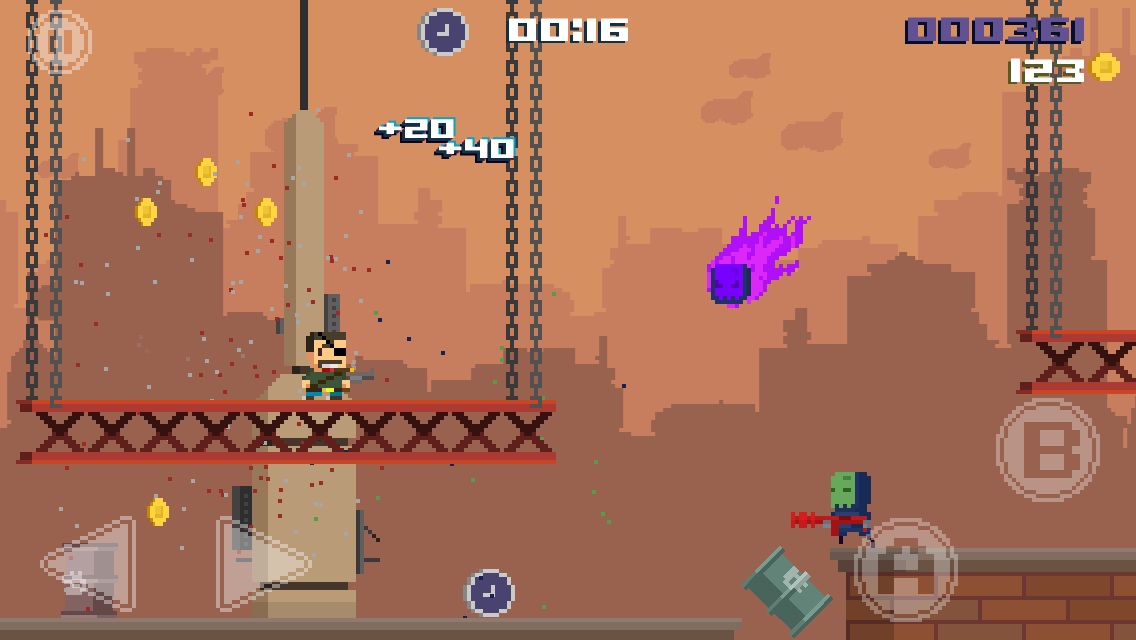 Players will find the control system fairly straightforward, with the typical layout of directional arrow icons and the comfortably placed A & B buttons (equivalent to your usual jumping and shooting buttons on any normal gamepad). Alien lifeforms will attack you from every direction, and the more you wipe out, the more points you’ll earn. Along the way, you’ll want to pick up time clock icons to prolong the level time, because if it reaches zero, you’ll be blasted with laser-beams from the heavens.

With the amount of aliens you will encounter, the distinct lack of lives, along with the time element factor, Bill Killem is no easy feat. It takes me back to the days of classic arcade shooters and beat-em ups, when a good result relied on great skill and endurance. Throughout the game, your coins can not only be used to buy a continue, but also to purchase a selection of costumes and speed upgrades in the store.

Bill Killem is a game that you’ll probably need to restart many times in order to really get to grips with it, and despite its high enjoyment factor it can be fairly draining if you’re not a fan of repetition. Having one life was kind of the game’s main letdown. Sadly, dying and having to continue or restart in the middle of all the action made everything a little less exciting, and guaranteed a much less seamless experience.

You don’t really have to spend any extra money in order to enjoy Bill Killem, though if you’re intrigued by what you may encounter further ahead, you’ll probably find you’ll need to invest a little pocket money into it. The costumes you can buy don’t really add anything to the gameplay, though they’re a welcome addition if you enjoy messing around with a variety of styles.

It may not be the most memorable game on the market, but it certainly holds its own as an intriguing endless runner with a unique blend of all guns blazing platforming mayhem.