Many of the games in the puzzle genre of video games are evolutions of classic board games, with various alterations made to the rules to simply, complicate, or simply diversify. Of course, this is really just carrying on the work that was happening in physical board games themselves before video games came along and blew a huge chunk out of that market. For example, Reversi, or Othello as it’s popularly known, is a simplified version of the ancient Chinese game, Go. The latest game from Synesthetic ($2.99) creator Alex Dantis, Polygon Evolution (Free), is also a variation on Go, simplified in some ways, complicated in others, and like its ancestor, a lot more fun to play against a human than a computer.

Polygon Evolution is a one or two player puzzle game that has two main components to it. On the surface, it seems to be about placing pieces in such a way that they line up and form more advanced shapes, which need to be lined up with others of the same type. That’s how you score points, and it’s what you need to work towards at all times, but as soon as the computer or another player are introduced, the other, perhaps more important part of the game becomes clear. This is a game about controlling territory. You need space to line up your pieces, and so does your opponent, and the quicker you can cut off your opponent’s growth opportunities, the better. If you end up in a position where you can’t possibly line up anymore pieces, you’re finished. 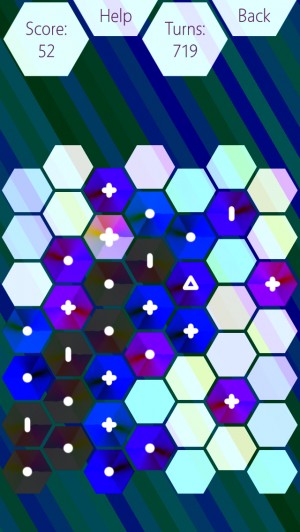 As in Reversi and Go, you can use your opponent’s pieces to your advantage. Lining up at least three of the same type of piece will create one piece of the next level up. Those three pieces don’t all need to be yours, however, as long as your pieces make up the majority. The hex grid that the game plays on is a fairly compact 7 x 7 cells, so you need to be very careful about where you place your pieces. A poorly placed piece can cut off your own opportunities for scoring, open up new paths for your opponent, or worst of all, outright give your opponent a free match. It’s a very confrontational game with lots of things to consider when making a move, and matches generally wrap up in a reasonable amount of time.

The game includes a variety of play modes, including single-player classic and expert, and multiplayer online and pass and play. The rules are slightly different between single and multi. Most notably, in multiplayer, the game ends when one player wins by making a triangle, the highest level piece, or loses by not being able to make a move. In single player, as long as you can make any moves, you’re free to keep playing and going for a higher score, regardless of your opponent’s situation. The computer’s AI difficulty depends on which mode you choose, with classic offering a mild opponent who is fairly easy to cow around, and the unlockable expert mode featuring a human-eating machine from which there is no escape. Some difficulty settings between these two might have been nice, since I didn’t feel like either AI opponent was right for me.

Of course, this game is free, so you’re probably wondering where the catch is. The game features a few kinds of IAPs. Various visual and audio themes are available for $0.99 each, so if you want anything other than the default theme, you’ll have to open the old wallet. These are also a nice way to pay the developer some money if you really enjoy the game, and since they’re entirely cosmetic, I doubt anyone could take reasonable issue with them. The other IAPs are a little bit different in that regard. By default, you can take 999 moves in single player mode across all games. Once those run out, the game presents you with an IAP for infinite turns for $2.99. If you don’t want to pay, you can wait for a timer to recharge to play some more. It’s like a really big stamina meter that you can pay away. The last IAP gives you what amounts to a continue if you end up boxed in during single player mode. You can only use this once per game, so you can’t go too wild buying your way to a higher score, but it is something to think about when chasing scores on the Game Center leaderboards. 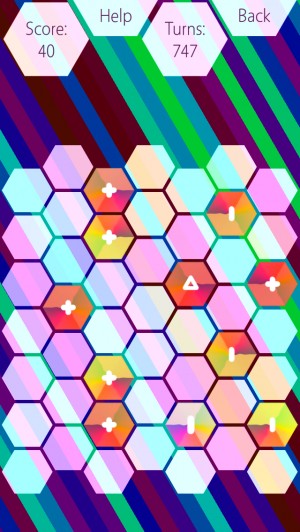 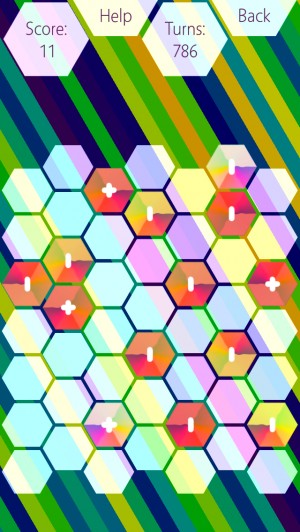 Polygon Evolution is a fairly deep puzzle game that requires careful strategy to fully enjoy. I also strongly feel that its best qualities shine strongest when you have a well-matched opponent, and the computer AI isn’t going to fit the bill for a lot of players. Since the game is free, there’s nothing to lose by trying it, but see if you can’t get a friend to join you, as it’s a far better experience that way. It’s an interesting take on the usual matching and territory-battling games, and it’s worth checking out if you can get a like-minded adversary.