We checked out SMG Studio’s Over The Top Tower Defense title (OTTTD) last month and were stoked about its unique take on the genre. With an impressive melding of traditional TD and action-RPG elements, all of my expectations as to what it had to offer were happily exceeded. Indeed, OTTTD ($4.99) not only takes tower defense to a gameplay depth rarely seen for the genre, but it does so with ease, making this an awesome and refreshing update to the classic genre.

At its core, OTTTD is tried-and-true tower defense with an impressive action-RPG layer on top of it. You have your typical selection of basic towers that can both be upgraded in strength and transformed into ‘advanced’ towers that offer different perks like anti-air specialties, exceptional range increases, and so on. Most of the maps also fall into typical TD archetypes, although I really enjoyed the boss maps, which offer a pretty unique twist to boss battles beyond the usual big bad guy slowing rumbling to the end point (which, in OTTTD is the destruction of your base). The tower defense portion on its own is pretty standard, but it’s balanced well compared to its IAP offerings and I really enjoyed its emphasis on less waves that have more enemies. 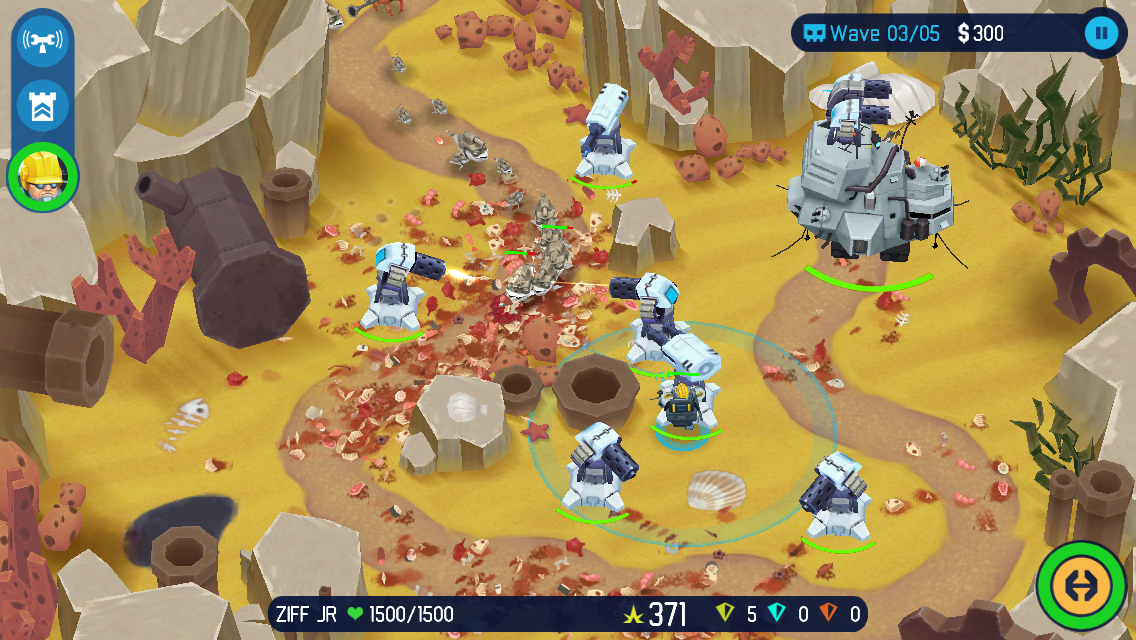 Where I think OTTTD really shines is with its hero system. After a few tutorial missions, players can choose up to three heroes to accompany you on a TD map. Now, heroes have been implemented well in TD titles before (Kingdom Rush comes to mind), but it’s never been done at such a grand scale. Each hero is pretty unique, and they have a lot of special skills only available to them. For example, the Engineer has a host of repair and temporary tower upgrades available to him while the Saboteur has a host of mines at his disposal. Heroes aren’t restricted to paths either, so you can set your Recon sniper up in the middle of the map while you can micromanage your other soldiers into the thick of battle. There’s a total of seven heroes to unlock and map tactics can change drastically depending on who you take into battle.

To add even more complexity to the hero system, each has a total of sixteen different abilities (some passive, some active) that can be unlocked by spending skill points earn via level ups. In addition, heroes can only take two active skills into battle, meaning that players will have to choose which of the half dozen to not only select, but also to invest in upgrading. Choosing between investing in your Recon’s sniping abilities via range and damage increases, or focusing on upgrading his active abilities which can offer some impressive long-range damage output become meaningful questions. Finally, as if that wasn’t enough, each hero has their own tree of weapon unlocks which not only increase overall damage but can also change the type of damage done (tying back to certain passive skills that upgrade certain damage types). 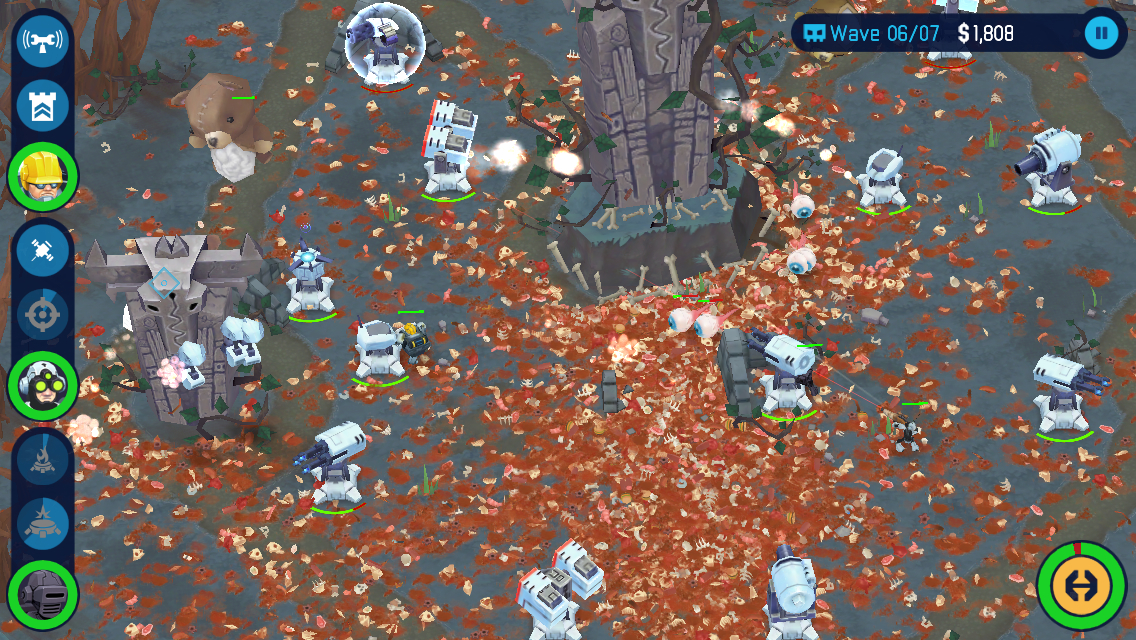 There’s a dizzying amount of options within OTTTD and they’re all pretty easy to understand and upgrade. Most TD titles focus on the journey of jumping from map to map towards completion. With its impressive depth, I’d argue that OTTTD puts just as much emphasis on hero cultivation and customizability. Sure I want to unlock and check out new maps, but I care just as much about replaying older missions simply to unlock and upgrade new skills. It all leads to a TD experience that’s far deeper than the majority of the genre offerings on iOS.

Then there’s the combat and presentation itself, which is truly over-the-top. Story snippets are rife with humor, all aspects of the game exude a futuristic vibe which I enjoyed, and the actual battles against waves of enemies are incredibly gory to the point of hilarity. Every alien enemy explodes into bits and pieces that get littered across the battlefield and stay there for the duration of the map. One particular hero skill set even makes those giblets explode, dealing additional damage to enemies around it. Clean battlefields quickly give way to a new meaning to the term “guts and glory.” One minor complaint with this approach is that it does become hard to see tower/hero health as well as paths and even enemies once the map has had a few waves. However, I think it’s all worth it.

Other than the above minor issues, my concerns with OTTTD are few and far between. A tutorial outside of the missions and the ability to see the names of potential advanced towers before upgrading them (at this point you kinda have to memorize the pictures and what they do) would be nice and can easily be added. Otherwise, this is such a deep and unique take on tower defense that everyone really has to check it out. In my view there will always be room for awesome takes on traditional TD games but I hope developers take note because OTTTD proves that the genre can be improved in an awesome way while still staying true to its roots.