Nobody tell Noodlecake Games that they’re doing this whole flaplike thing wrong. With Flappy Golf (Free) having creatively reimagined Super Stickman Golf ($2.99) into a platformer with flapping, now Noodlecake has made Jupiter Jump (Free), an endless runner where bouncing off of the ground to get through hoops while avoiding mines is the key. It could have been a simple game that was moderately entertaining, but no: Noodlecake went and made a deeper flaplike that’s incredibly rewarding.

See, the whole game is about risk. Most flaplikes are incredibly challenging in a straightforward way: they present one challenge to the player, usually incredibly difficult, to try and survive. But Jupiter Jump makes its obstacles also a reward: by passing close by a mine, the score multiplier increases. Thus, each mine could mean game over, or a step closer to a high score. 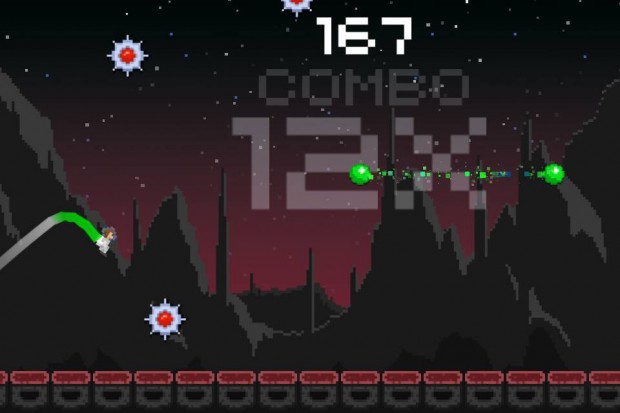 The game progresses in an overt but clever way. Scores start in the single or double digits, as the bouncing and mines systems are figured out. As the physics are understood, scores start to get into the low hundreds, and then steadily increase. The scores increase exponentially thanks to the multiplier, so even the really high scores aren’t as far away as they seem. The game does an amazing job at making sure players know that they’re doing better when they feel like they’re doing better. My high scores sure felt like it was because I was understanding success in a much better way than I was before.

This is all attributable to the game’s core value: successful risk-taking should be rewarded. Make skillful passes near mines? That’s worth more points. See a portal to another area, whose entrance is vertical, rather than the usually-horizontal points gates? Make the tricky jump through it and get rewarded with immediate gate-filled sections for lots of points. Play it safe and scores will be much lower. And the more successful you are at managing risks, the better you do. It’s a very simple philosophy, but one that works.

Perhaps that’s why Noodlecake bristled at me calling the game a flaplike, because this is so much more than a Flappy Bird type of game. There’s depth: perhaps not as deep as an ocean, but depth like the deep end of a swimming pool. And I don’t mean that as an insult: it’s a small game, another endless runner, but one that is rewarding for what it is.

Cherish games like this that have ad-free IAP for $0.99: other developers have mentioned that they either avoid putting it in so that their game doesn’t have the “contains in-app purchases" label, or price it high enough that it’s financially viable to them (Chaotic Box says at least $4.99), so $0.99 is quite worth it, even if the banner ads aren’t even all that obtrusive to begin with.

While there’s a lot of 2D endless runners out there, and a lot of good ones, Noodlecake’s take on making quick-but-good games is a step above just about everyone else out there.