If you’re a fan of strategy games, then the name Slitherine needs no introductions. If you’re not, all you really need to know about these guys is that they have been around the block a few times when it comes to this genre. They’ve made a board game, a bunch of computer games, quite a few iPad games, and only a few iPhone games, almost all dealing with the subject of war. Now, when it comes to strategy war games, certain wars are covered more often than others, but one of the cool things about Slitherine is that they’ve dabbled in a lot of unconventional settings, as seen for example in Da Vinci’s Art Of War ($3.99) on iPad. I like a game based around Napoleon, Rome, or World War 2 as much as the next guy, but it’s nice to get outside the box now and then, you know?

I guess that’s an ominous way to start a review of Frontline: Road To Moscow ($2.99), a game which is most definitely based on World War 2. In any other year, I’d still be giving the game a pat on the back for at least going with the less common Eastern Front of the European Theater, but not only have there already been a couple of releases covering this part of the war in recent months, Slitherine actually assisted with one of them. That game is Tank Battle: East Front ($1.99), which I enjoyed when I reviewed it a couple of months back. Admittedly, Slitherine only contributed to the graphics of that game, but the two games end up having quite a bit in common anyway.

Frontline is a turn-based strategy game that puts you in control of the German forces as they try to push their way into Russia. The basic game gives you 12 different missions to play, with two additional packs of missions available as IAP for $1.99 each. The battles take place on the land, in the sea, or in the air, providing some visual variety that turns out to change very little in terms of gameplay. Each mission has three goals to complete, though some of them are optional. Usually these missions involve either capturing a base by moving a unit onto it or destroying a target, but there are a few less common ones such as escort missions. You’re given an initial assortment of units on each map, along with some resources you can use to call in reinforcements, resupply your existing units, or perform an airstrike on applicable maps.

All told, there are a ton of different units you’ll be playing with, partly as a consequence of covering three different types of warfare. Each unit has special abilities you can activate, and as you play, they’ll level up, gaining access to new, more powerful skills. This lends the game a bit of customization, since the units you use most will be the ones that gain in power, while units you don’t make use of will lag behind. You’ll want to be careful, though, since you don’t get to choose which units you’ll have access to on any given map. It does you no good to have a unit type fully powered up when the next map won’t let you use it. It’s not a big concern when you’re playing on the game’s very lenient normal difficulty, but if you play on veteran difficulty, you’ll want to make sure you’re spreading the experience points love around a bit. 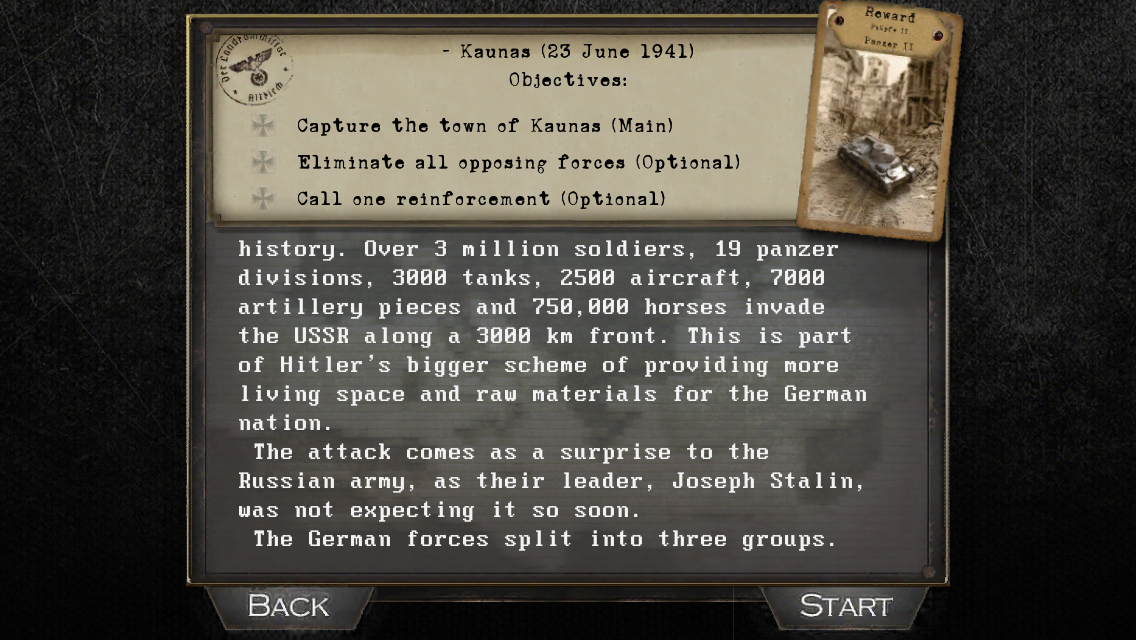 The maps themselves are hex-based, with lots of different types of terrain that will put your units at an advantage or disadvantage. Certain parts of the terrain must be opened up by moving particular units through them first, and there are plenty of interesting choke points and places to ambush or be ambushed. The game includes bonuses for flanking, as well as the ability to knock units back with a powerful strike, stunning them for the next turn. I find the game does a nice job riding the line of accessibility and strategic depth, though its chips clearly fall on the side of the former. I’ve probably mentioned before that although I enjoy this genre quite a bit, my skill leaves a bit to be desired, but even with all of my usual mistakes and blunders, I was still able to punch my way through normal difficulty without too many headaches.

Frontline has an interesting look to it, with the units going for more of a board game look than reality. The level of detail is exceptional, so even though the animations aren’t terribly exciting, the game still has really appealing visuals. I especially enjoyed the maps with snow. The UI is really good, but it was a bit hard to read some things due to the small size of the text on an iPhone screen. I also had some trouble at times getting the game to recognize the space I was tapping, since the hexes in this game are a bit smaller than average. That one might be down to my sausage fingers, though. I do wish the game would allow you to undo movement, or perhaps confirm it, since a mistouch can send a unit to a place you really didn’t want it to go to.

I ended up enjoying Frontline: Road To Moscow a little bit more than Tank Battle: East Front simply because there’s a bit more variety to the game. Frontline, like Tank Battle, is a very straightforward strategy game that may not satisfy strategy veterans, but I think it has something to offer gamers looking for a less-intensive simulation than we sometimes see in this genre. This is all provided you haven’t gotten your fill of the Eastern Front of World War 2 yet. There’s a strong sense of deja vu here if you’ve been playing along with the recent Tank Battle releases, but while Frontline covers a lot of similar ground, it still manages to offer some cool elements of its own.