You can’t help but be won over by some games on pure charm, and Aliens Drive Me Crazy (Free) certainly did that for me. I play a lot of games, so it’s pretty rare for a game to give me the sort of reaction where I wonder what the heck is going on, the whole time with a smile on my face. I wasn’t quite sure what to expect from the opening cut-scene, which shows aliens abducting gangsters, turning into clones of them, then going on a rampage as our hero watches from his window. He takes to his car to settle some business, and the game begins.

With that setup, you’re probably thinking it’s some sort of endless driver, where you collect coins, upgrade your guy, and see how far you can get. You would be partly right. The game starts off with your character driving his car in an auto-side-scrolling view. You can swipe up to make him jump, which is your main defense against the aliens taking shots at you. Not long after you start, you’ll run into some buildings. Well, more accurately, you’ll run through some buildings, and you can use your jump to hop up floors or swipe down to crash down through the floor you’re on. Pieces break apart, explosives explode, things fly everywhere, and good times are had. Coins are scattered around all over the place, and you earn more by defeating enemies, giving you some incentive to attack them rather than simply avoid them.

After you’ve traveled a certain distance, your character will park his car and enter a larger building on foot, where the game takes on a bit of a Bonanza Bros. or Elevator Action feel. Here, you have to ascend the floors, take out bad guys with your weapon, rescue hostages, and search for the key to the roof where a piece of the alien satellite relay awaits. Once you reach the roof, simply touch the relay to detonate the whole building, and you’re on to the next driving stage. Every 10 levels, you’ll face off against a boss during the on-foot segments, and after that, it’s onto the next set. Your character can only take a certain amount of hits before he dies, but you’ll always start back on the level you were on. Since you can use the coins you collect to upgrade your character in many ways, both permanently and in the form of one-use bonuses, you can usually come back from a loss stronger than you were before. It’s a nice feeling of progression.

Thanks to the levels being arranged semi-randomly and the game’s physics engine, there’s high potential for a lot of unscripted awesome moments, like smashing into a flying saucer whose tractor beam has pulled in a bazooka soldier and sending the whole works flying at an oncoming semi-truck with a battering ram, causing everything to go up in a ridiculous explosion. These moments help to assauge the repetitive nature of the game. In combination with the game’s jaunty tone, it puts you in a good mood while you play, which helps you forgive some of its quirks, like not having direct movement or shooting control over your guy when you’re on foot. 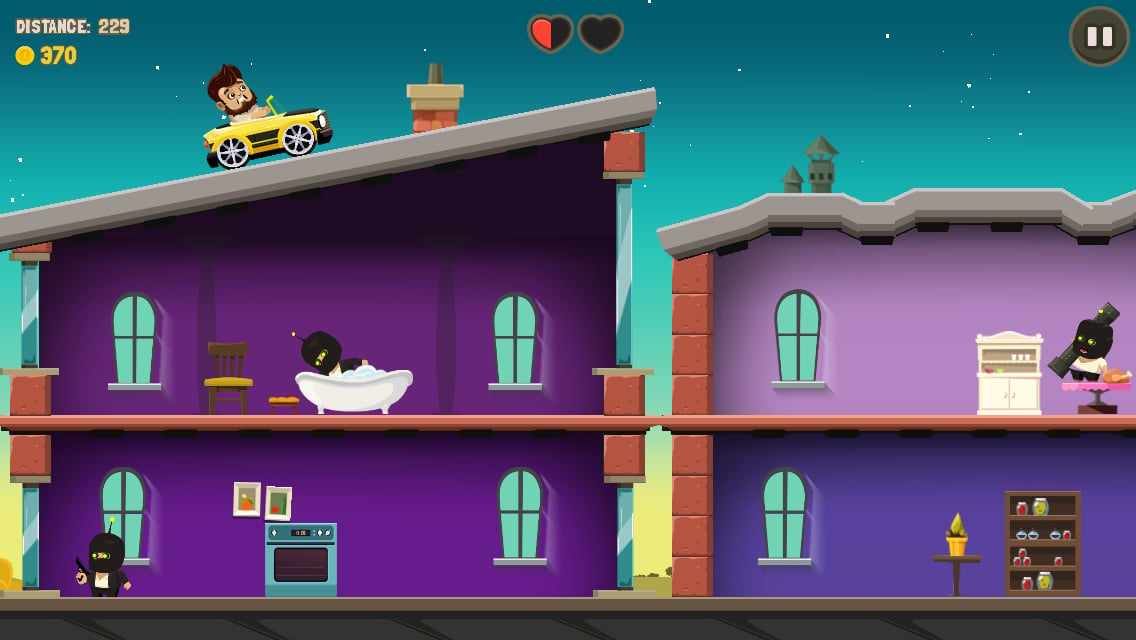 There are tons of unlockables, including new outfits, cars, weapons, and others. Some of them take some time to save up for, but the increase in power that comes from a nice new gun or car makes it more than worthwhile. The game’s economy is incredibly fair, no doubt largely owing to the absence of IAPs of any kind. It’s kind of unusual for a game of this structure, and it’s certainly appreciated. Of course, since there seems to be no end to the number of levels, you’ll eventually reach a point where you’ve bought everything, and after that, the repetition starts to set in a bit more strongly.

The presentation goes all the way in selling the light-hearted feeling of the game. Both the main character and the enemies are more cute than cool, and the backgrounds are vibrant and detailed. Enemies let out a high-pitched little scream when you kill them, and the explosions provide a nice boom to let you know you did something right. While there isn’t a lot of different tunes, what’s here is used effectively to draw a line between the driving and shooting sections. The driving tune is especially jazzy and bouncy, so hearing it come in as you blow up the building and make your escape just feels fun. The package is rounded out with a fun set of Game Center achievements and a few leaderboards. 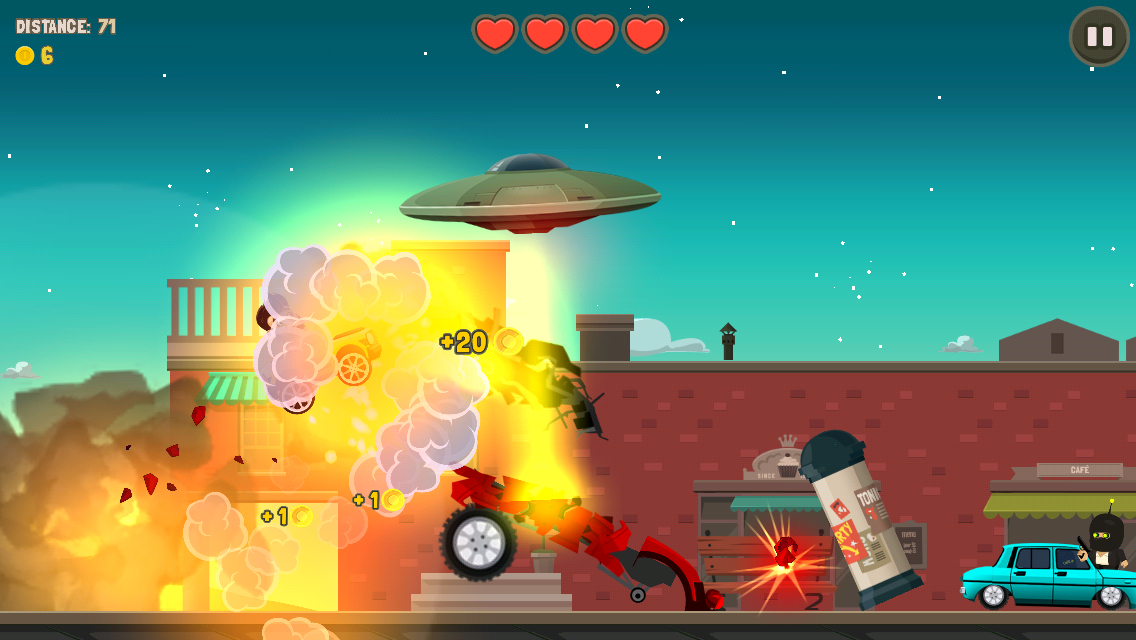 Like most of the games from developer Rebel Twins, Aliens Drive Me Crazy isn’t something most people are going to want to sit down and play for hours at a time, but is incredibly fun in short bursts where its limited gameplay scope isn’t quite so apparent. The developer has managed to find a manic tone that resonates extremely well with the wild, unique gameplay. It’s not hard to see why its great sense of silly fun won over members in our forums. I’m not sure if it’s something you’ll love forever, but there’s nothing wrong with an exciting fling now and then in one’s gaming diet. This game provides that, and perhaps a little more.