You might remember the developer of this game, Game Stew, from the cool Tower of Fortune ($0.99) games. Even if you forgot their name, you would know the minute you laid eyes upon Devil Shard ($0.99) that it’s from the same people, since it shares a visual theme. Play into the game a little bit and you’ll have it entirely confirmed. That series, most recently represented by Tower of Fortune 2 ($1.99), presented a unique combination of RPG, roguelike, and slot mechanics which, with its unique art style, created something that really stood out among the numerous pocket RPGs available on the App Store. Devil Shard is another RPG twist, but this time it’s a considerably more pedestrian one. It doesn’t stop it from being fun, but it’s a lot harder to make the case for adding this to your library as a result.

In Devil Shard, you play as a hero who has set out to prevent a war by fighting a bunch of monsters in various locations. Look, I don’t see you coming up with a better plan. Similar to Tower of Fortune, you have a base camp that you can come back to between stages to power up, buy items, and equip, strengthen, or sell gear. Unlike that game, there aren’t any interesting mini-games to partake in, so it’s really just a pit stop before you head on to the next stage. After choosing a stage, instead of spinning slots to activate random events on route to a boss fight as in Tower, here you’ll fight through the same set of enemies in order, with battles playing out as a match-3 puzzle game on a five by five grid. If you clear the stage, you’ll unlock the next one for purchase with the gold you’ve collected. 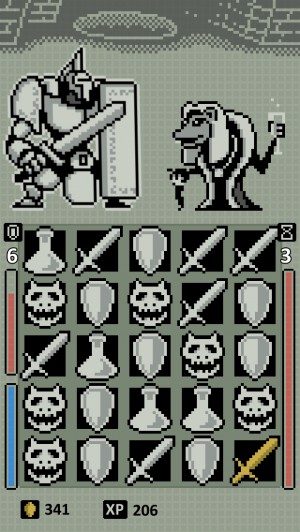 Generally speaking, one time through the level isn’t going to earn you enough money to proceed, so you’re going to have to replay them. Each time you do, the stage levels up and the enemies become more difficult. Should you completely run out of HP, you’ll lose almost everything, though any stages you’ve unlocked and purchased will remain as such. You’ll also keep the gold you’ve earned and the materials you’ve collected. All equipment will be lost, as well as all items, skills, and experience. This creates an interesting choice as you play. Do you invest in equipment and items, which increase your survivability, or do you save your gold and materials for a future run? You have to strike a balance unless you want to grind like crazy to open up new levels. As it is, the game turns into a bit of a chore as you get deeper into it, since you find yourself having to spend more to open levels while at the same time needing to invest to survive the more difficult enemies.

The battles themselves are pretty typical of the sub-genre. Match three swords to attack, match shields to defend, match potions to heal, and avoid matching skulls to prevent taking damage. Unlike many match-3 games, you don’t actually have to make a match to move a piece in Devil Shard, so you can set up combos. Every so often, the enemy gets a turn to attack, where they might inflict a nasty status on the board to stack things against you, though, so don’t waste too many turns setting up. As you play, a meter fills up, and once it’s topped off, you’ll summon a guardian to take your place for a while. Each of the guardians has different traits and skills, but you only start with the Bonfire Keeper, who gives you a defensive boost. The others must be unlocked by various means. 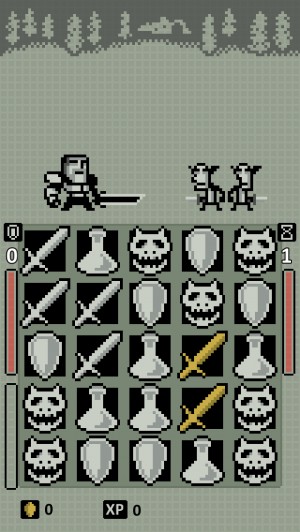 The game’s large list of unlockables is chief among its strengths. You’re always making some kind of progress towards a new treat. As the game goes on, though, and the list of unlockables is exhausted, you’ll find yourself having to do multiple runs to save up for a proper run at things, and if your luck is poor, you’ll be right back where you started. I wouldn’t say there’s a difficulty wall, but it does get pretty tough a few levels in, and the way the field tends to get flooded with skulls can be frustrating. It’s kind of a difficulty hedge. If you find you can’t get over it, the game has IAP to pick up more gold. The balance is just on the side of unfair, in my opinion, and I wish the game offered a doubler to even things up.

The game’s retro look feels like a cut ‘n’ paste job from earlier titles. I liked that visual theme in prior games, but there’s no good reason that Game Stew can’t branch out a little bit. This game could use a little something to spice things up. The music is excellent, but it again calls back a little too much. Finally, there’s Game Center support for leaderboards and a huge, if not almost entirely uninteresting, list of achievements.

The biggest problem with Devil Shard is that there about a million other match-3 RPGs out there, and this one doesn’t do much to distinguish itself. The few ways it does, such as with its visual style, are just a bit too familiar if you’ve played Tower, so the end result is something that lacks novelty in almost all respects. If you want to play a match-3 game, there are lots of other choices, probably even within your very own library of apps. If you like the other parts of Devil Shard, I can almost guarantee you’d like Tower of Fortune better. Even for fans of that series, the ways this game steps back, such as a lack of extra features like the tavern, makes it feel like less of a complete package. It’s pretty hard to mess up a puzzle-RPG, and that hasn’t happened here, but it’s equally hard to step out from the pack, and I feel this game just doesn’t do enough towards that goal.