Some games are so beautiful that even before you lay your hands on the controls, you want to love them. Last Inua ($3.99), a haunting adventure that takes place in the snowy arctic, is one of those games. The art design is striking. The wintery vistas provide a feeling of quiet isolation, an aspect that is bolstered by the restrained sound design. At the same time, the main characters are animated so well that you can feel their warmth and affection, and again the sound design backs that feeling up. The basic gameplay hook is well-tested and promising without having been overdone. You control two characters, each with their own set of skills and abilities, and must make use of the right skills in the right situations to see both of them safely to the goal. Think Lost Vikings, minus one viking, and you’ll have the general idea, or at least what I think was the intended idea.

Last Inua is a father-and-son story that follows the duo as they journey to ask three sacred keepers for help. An evil spirit named Tonrar is threatening the safety of the world and young Hiko and his father Atataaq are the only ones standing in his way. Atataaq is a big, strong fellow who can knock down walls with his punches and climb up sheer surfaces with his ice picks. Hiko is small and physically weak, but he has access to a variety of spirit powers that help you progress through the levels. Apart from a brief section of the game, you’ll be traversing the harsh terrain of the arctic, stopping at temples along the way. The game shakes out as a stage-based puzzle-platformer, though it tries its best to maintain immersion and avoid being too gamey. All told, you’re looking at a few hours of play at most, and unless you’re dedicated to hunting out a few stray Game Center achievements, there isn’t any strong incentive to come back for seconds. 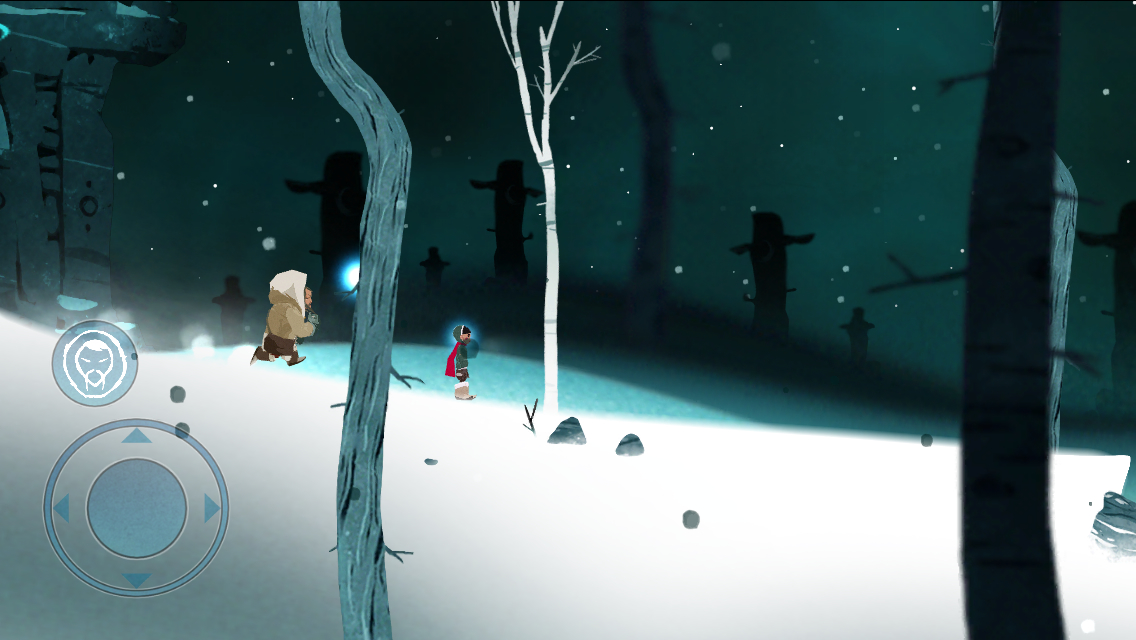 The stiff controls may evoke games like Another World ($0.99), but they do the game no favors at all. Movement is handled by a really finicky virtual stick, while almost all of your actions are loaded onto a context-sensitive virtual button. Switching between the two characters is handled by way of another virtual button placed just above the stick, and before you ask, yes, you will sometimes hit that button accidentally. In addition, you will sometimes need to use Hiko’s power to make a platform, and this is done by drawing along whichever predefined line the game wants you to use. While you’re doing this, Hiko will usually move along in the direction you’re moving your finger, and if you’re lucky, Atataaq might follow. It’s a mechanic we’ve seen in other games before, but it’s incredibly restricted here. You can only use it in particular places and there’s no real consistency as to where and why you can do it.

That’s a problem with the design of the game on the whole. While Hiko and Atataaq have a variety of skills, you can only ever use them in very particular places, which would be fine if the game communicated why we can’t use them in other situations. You end up being a slave to the design, and instead of tackling the big, interesting levels your way, you’re forced to try to hash out what the level designer was thinking. Last Inua often settles for less-than-satisfying solutions pulled out of its hindquarters, especially where Hiko comes into play. While Atataaq has to traverse the levels using his climbing and jumping skills, Hiko makes his way through with magic context-sensitive paths in the air and convenient teleportation. Sometimes Hiko needs his father to come and knock down a wall for him, while in another place, he can just teleport through a wall. The game certainly keeps you busy enough, but you never really feel like you figured anything out yourself. 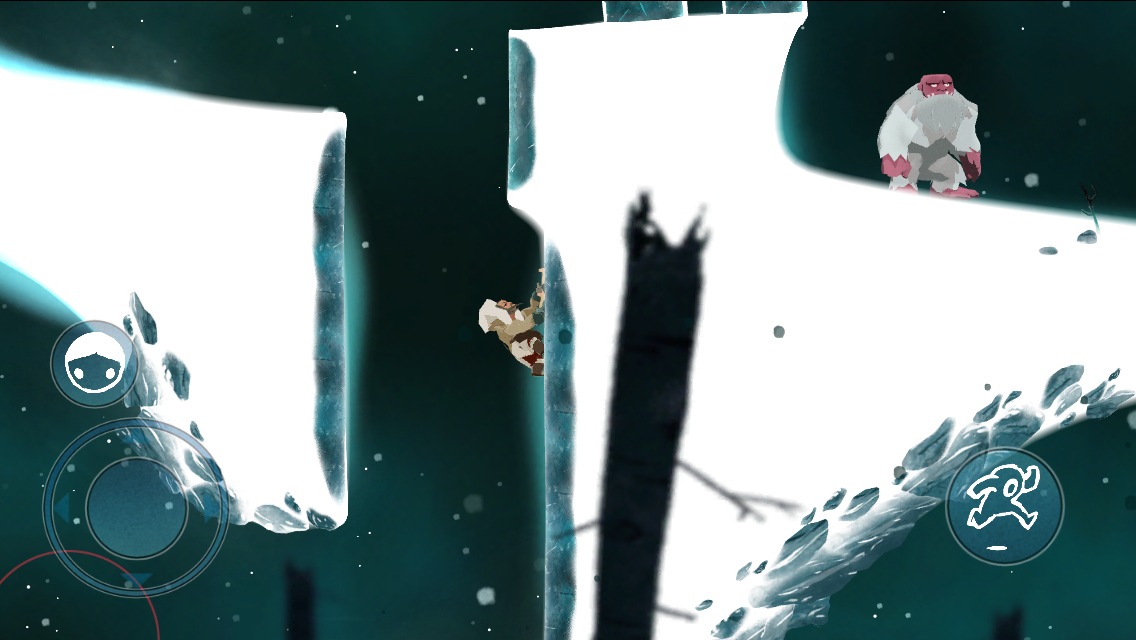 It’s also disappointing how little the characters actually need to help each other out. It’s less of a cooperative effort and more that the two have their own unique paths through each level. While you will need to use one character to help the other move forward at least once in each level, it always comes down to needing Atataaq to punch down a wall or needing Hiko to create a magic path for his father to run on. I feel like there was a real missed opportunity here, especially with how strongly the game tries to deliver the theme of these two needing one other.

The character control is a little bit clunky, partly due to that fussy stick, and partly due to how elaborately animated the main characters are. Turning around doesn’t always work right, and when it does, it can come out slower than you’d like it to. Atataaq has a tendency to roll when he’s coming down from a big height, but he’s not consistent with it, and that unpredictability can get you killed. Climbing up on ledges is excruciatingly slow, and you have to do it a fair bit with both characters. There are also some collision problems that crop up at times. I’ve had Hiko fall through his magic path a few times, even when the line looks solid and I have no control over him. I’ve also had Atataaq meet his doom at the hands of the side of a tooth. It all adds up to a frustrating feeling of not knowing what the designers are trying to communicate in terms of gameplay, and it permeates Last Inua from start to finish. 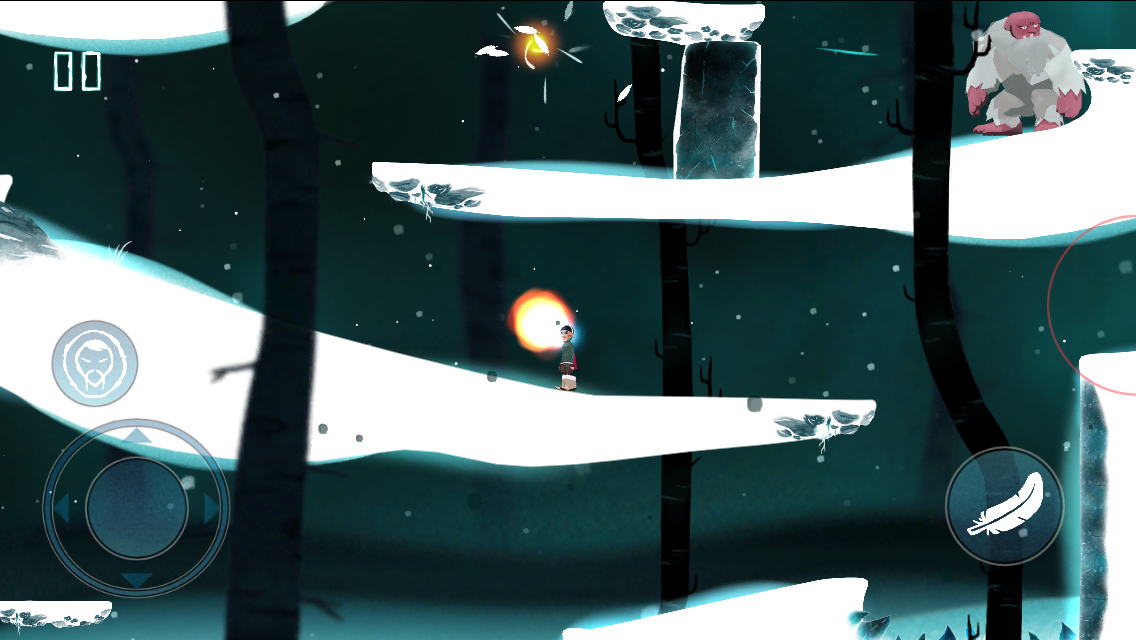 In its favor, the game is absolutely gorgeous, and when the gameplay stays on the rails, so to speak, it’s an enjoyable, immersive experience. The puzzles will never stump you, but they’re engaging enough to keep you from getting bored, and the developers were smart enough to throw in a section that gets you out of the snow just when you’re probably getting sick of it. I absolutely love the idea of using Inuit mythology as the basis of the story, and as mentioned before, the sound design is quite strong. I especially enjoyed the way the characters would call out to each other when they got too far apart or needed the other. Last Inua is a decent experience, it just feels like it could have been a lot more than that.