If you’ve ever wanted to play a game that’ll bring out the gremlin in you, this one will probably suffice. Gary is a rebellious fuzzy demonic creature who needs your help to get past the museum security in order to destroy its many valuable treasures. If you enjoy a good combination of physics puzzlers and breaking stuff, you’ll probably wanna give Lil Smasher (Free) a shot.

The concept is fairly simple. The goal is to make sure all the projectiles from Gary’s slingshot reach their designated targets. If the item looks fragile? You’ll probably wanna be aiming for that. That antique vase over yonder? Oh yeah, that’s going down. Each valuable item or target is situated in various positions behind numerous obstacles such as walls and barriers, arranged to conveniently block your path. This trickery means working out a specific method in which to get around it in order to smash that all important object. For example, a specific plank might be in the way but may be loose, so therefore knocking it down would create a see-saw effect of some sort. Likewise, targeting a boulder situated above could bring it down and see it through to launching your desired object into the air. Pigs might fly, after all. 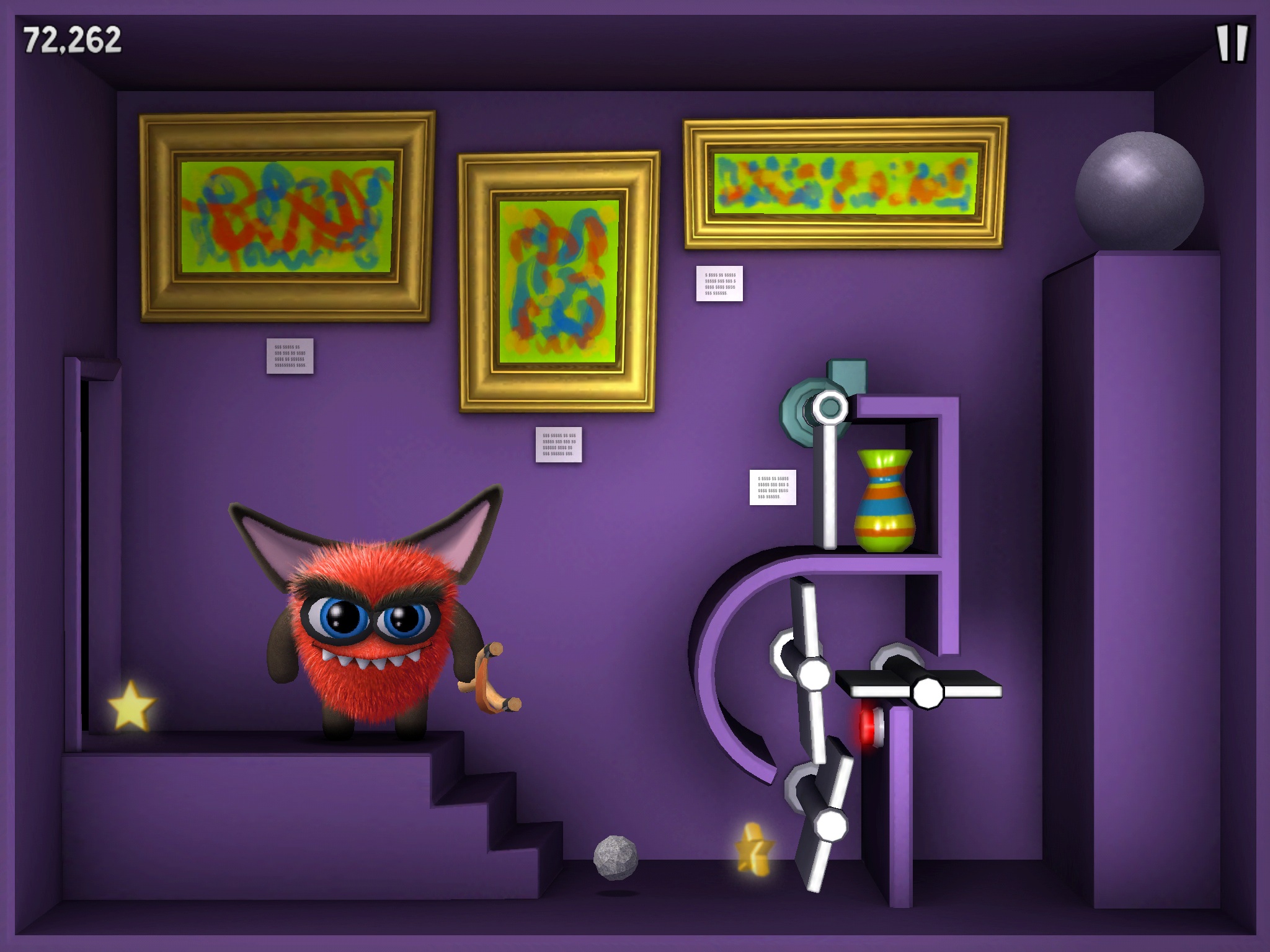 Along the way you’ll wanna see to it that you collect the numerous scattered stars across each level to earn the highest scores possible. The less rocks you fire, the better the bonus. The levels start out ridiculously easy, but soon you’ll be cursing as the difficulty spikes rather drastically thereafter. The only problem is that there’s only twenty one levels to play through and once you’ve played it through once, there’s no real reason to keep returning. Reducing the number of rocks you sling can earn you extra points perhaps, but it’s not really a game that keeps you running back countless times, and there’s no bonus missions or challenges to speak of. There are reportedly more levels on the way, but for now it’s a short solid game, best played in short bursts.

Where visuals and audio are concerned it’s fairly solid, with a delightfully catchy soundtrack and some rather fitting environments. I quite liked the cutesy style graphics and the clever animations, which alongside the great puzzle designs round up as an altogether moderately sweet package.

It’s hard to stand out among the masses, and where others have succeeded Lil Smasher fails at its most important hurdle. The gameplay mechanics are unfortunately the main source of frustration here, as on more than one occasion it became apparent that the “laser sight” emanating from the slingshot wasn’t producing the desired results. Despite my attempts at aligning the perfect shot, I still somehow had to aim off-kilter, which in turn made this laser sight redundant. These little niggles didn’t take away too much from the enjoyment of the game though, and are easily fixable for future updates.

Lil Smasher has bundles of potential, and is an enjoyable little physics puzzler for the most part. It’s quite short, and doesn’t offer anything extraordinary, but it doesn’t feature any frustrating pay to win elements, and only launches an advertisement once in a while which doesn’t disrupt gameplay too much. If you like a challenging game and you’re looking for something quick to play through, this would be the perfect steal.