Adventure To Fate ($2.99) bills itself as a JRPG-style game, but if the Internet has taught me anything, it’s that no two people can agree on exactly what ‘JRPG’ means. I’m not going to even try to go into the million different definitions I’ve come across in my time. That said, if your personal definition of ‘JRPG’ is turn-based random encounters, then Adventure To Fate upholds its promise. If your personal definition of ‘JRPG’ involves an off-the-wall story, deep battle systems, interesting characters, party building, exploring a big world, customizable character growth and development, or awkward laughing scenes, you might find this game to be a bit lacking. Adventure To Fate takes the basic ideas of very early console role-playing games and somehow creates something even more simple. On paper, this sounds like a horrible idea, but somehow, I still found Adventure To Fate to be a fairly enjoyable game.

Before I go into the review too far, I have to give the usual disclaimer. Yes, you have probably seen the sprites in these screenshots before. They come from a sprite set that developers can license for use, and many games on iOS use them. They’re not the most original things ever, but people who can both program and do art and have the time and desire to do both are rare. Hey, it beats stick figures, right? 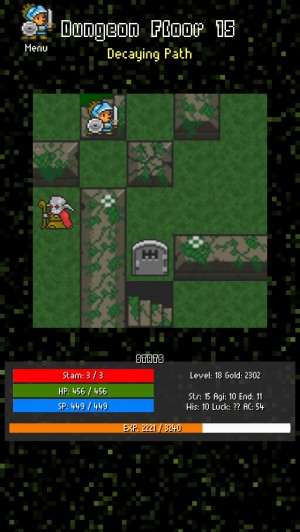 Okay, with that said, on to the game itself. In Adventure To Fate, you play as a hero charged with finding the missing king. It’s presumed he’s somewhere in the dungeons beneath Castle Cardell, but boy, is everyone going to look silly if he just went on a Wendy’s run. Most of the story can be found in the App Store description, and not in the game itself. This is apparently the developer’s first game, and its clear his ambitions are big just from reading the description. As for what makes it into the game, it’s not a whole lot, but there are hints of stories and sub-quests here and there that come through in snippets of dialogue. The dungeon itself is 27 floors deep, and is neatly separated into four zones with a basic dungeon theme, a desert theme, a jungle theme, and a kind of horror theme. Your goal on each floor is to simply reach the stairs leading down to the next one. Although the floors themselves are kind of small, it can be a bit of a trek to reach the stairs most of the time, and you’ll frequently have to battle a boss creature that’s standing in the way.

The reason why it takes so long to cover what is rarely more than about eight to ten steps is that every step or two, you’ll get hit with a random encounter. Given the extremely small size of the maps, I can see why this design choice was made, but if you’re the type to get irritated by random battles, stay far away from this one, because that’s pretty much the majority of the game. The battles themselves are, as mentioned, turn-based, and you’ll face anywhere from one to three enemies at a time. Your party consists of you, and you alone, which greatly limits battle strategy. Essentially, every turn you have a certain number of stamina points that you can exhaust. A basic attack or using an item will consume one point, while advanced skills will use two or more. Once you’ve used your stamina, the enemies take their turn, and then it’s back to you, until one side or the other is dead. 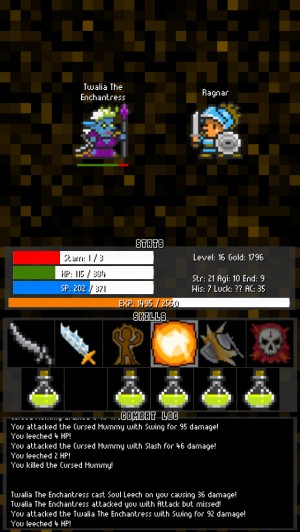 Typically, there are two different strategies you’ll end up using in a fight. If the monsters aren’t too strong, it’s best to just let loose with your strongest attacks until the fight is over. If they are strong, numerous, or both, you’ll want to use whatever buffs and debuffs you have, and then let loose with your strongest attacks until the fight is over. You might have to chug a health or MP potion here and there, but that’s basically as deep as it goes. There isn’t a lot of strategy in the fights themselves, as they’re barely past the first Dragon Quest in terms of complexity. Instead, the strategy ends up being in the preparation. As your character gains levels, they’ll learn new abilities, and eventually, you’ll end up with more abilities than you have active slots. This forces you to choose which ones you want to bring with you into battle. This limitation also applies to restorative items, as you can only bring six of them into any given fight, and you’ll need to remember to replenish your active stock if you use any.

Also part of the preparation is your equipment. You’re usually better off equipping the most powerful weapon and most durable armor your class can, but you have several other equipment slots that allow you to mess around a bit with your stats. Given the way battles play out, stats trump any actual in-battle choices you make, so having the right gear set-up can make a serious difference in your ability to survive. At the very least, there’s quite a bit of gear to find and buy, and the income from killing monsters flows well enough that you can almost always afford something new whenever you’re back at camp, unless you die too often. The penalty for death is a loss of experience and gold, so dying too frequently can leave you in a bad spot, especially since you’re not recharged to full HP/MP upon resurrection. 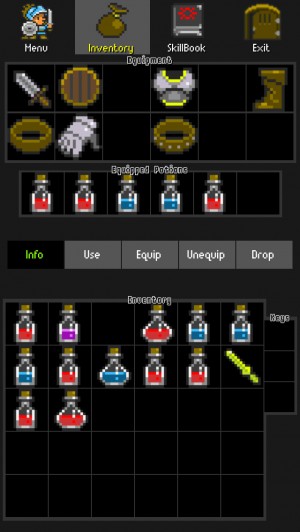 The game has a variety of races and classes to choose from when you create your character. The races mostly act as a modifier for your starting stats, while classes dictate which special abilities and equipment you’ll have access to. If you ever wanted to be a vampire druid, now’s your chance. The balance of these classes is kind of all over the place to start with, with the choice of race adding another spanner into the works. Some builds are assuredly more viable than others, which has its advantages and disadvantages. Still, regardless of the character you build, combat mostly plays out the same way. Beyond making things more easy or difficult for yourself, there’s not a lot of incentive to explore the different character types.

The graphics aren’t anything to write home about. The Oryx sprites look as good as they ever have, but it does get a bit boring seeing this set pop up so much. The dungeons are sparsely detailed but there is enough there that they at least look like the settings they’re supposed to be. The user interface clashes badly with the rest of the graphics, something that happens pretty often with mobile RPGs. The UI in general has a lot of issues. It’s confusing and full of pointless busywork like needing to unequip something before you can equip something else, instead of automatically doing that for you like almost every other RPG out there. Shop navigation is rough, with separate menu selections for getting information, buying, and selling, and no comparison or even a button to bring up your menu so you can check what you have versus what’s in the shop. In the relatively slow-moving battles, if you happen to touch the screen while the enemies are moving, you get a text pop-up telling you that you don’t have enough stamina to move every single time, which I guess is helpful but seems pretty unneccessary. The music is just plain bad, though the later stuff isn’t nearly as ear-bleeding as the first dungeon’s tune.

Yet in spite of all of my complaints, I still felt like chewing away at Adventure To Fate. The classic gameplay loop of RPGs is fully intact here, and its simplicity and limited scope actually gives it a certain appeal. Most games of this sort demand a fair bit of attention from the player, so they’re not actually well-suited to short bursts of play. This game is pretty easy to pick up, play for a few minutes, and put away, comforted by the knowledge that you made a little bit of progress. Its lack of complexity in story, character building, or dungeon design means that you can leave it for a while and still be able to quickly regain your bearings whenever you get back around to it. Its slow, turn-based combat and portrait orientation make it good for situations where you only have one hand free. It’s not a great RPG by any means, but it serves a particular context that is somewhat underserved. That might be enough to earn it a place in the library of genre fans. Not bad for a first outing.