The topic of cloning can be broadly broken into two periods: before Michael Keaton’s banner work of art, Multiplicity, and after. Oh, sure, in those heady days before 1996, we had some ideas. Waves were made by a sheep named Dolly, Spider-Man discovered that he looks good in a hoodie, Thomas Riker had shown us that a Riker’s power is directly proportional to the size of his beard, and George Lucas had certainly written something about clones on a coffee-stained napkin. However, it wasn’t until The Keats showed us all how it was done that cloning became truly appreciated as a fictional device, and we are all better for it. Video games have never been shy about dragging clones into the works, mostly because it was a good excuse to reuse art assets while creating a memorable boss fight. One of the best examples from the early days of gaming was in Prince of Persia ($1.99), where an encounter with a mirror created a doppleganger who would go on to help you with a few puzzles before you had to face off with him.

Instantion ($1.99) has a bit of a whiff of that well-loved sequence about it, with a bit of Binary Land thrown in for good measure. In each stage, you need only reach the exit, but getting there with just one person is impossible. Luckily, you have the ability to create up to three copies of yourself, or ‘instances’ as the game calls them, to help you reach your goal. Your instances will mirror your actions exactly, though the enviroment may block them in certain ways. You can throw them just about anywhere with a slingshot-like mechanic, and you can easily call them back at the touch of a button. Your copies can stand on pressure plates, flip switches, and pick up keys just the same way you can. They can also die just the same way you can, and if you lose one in this way, you can’t use it again until you refill at a station. 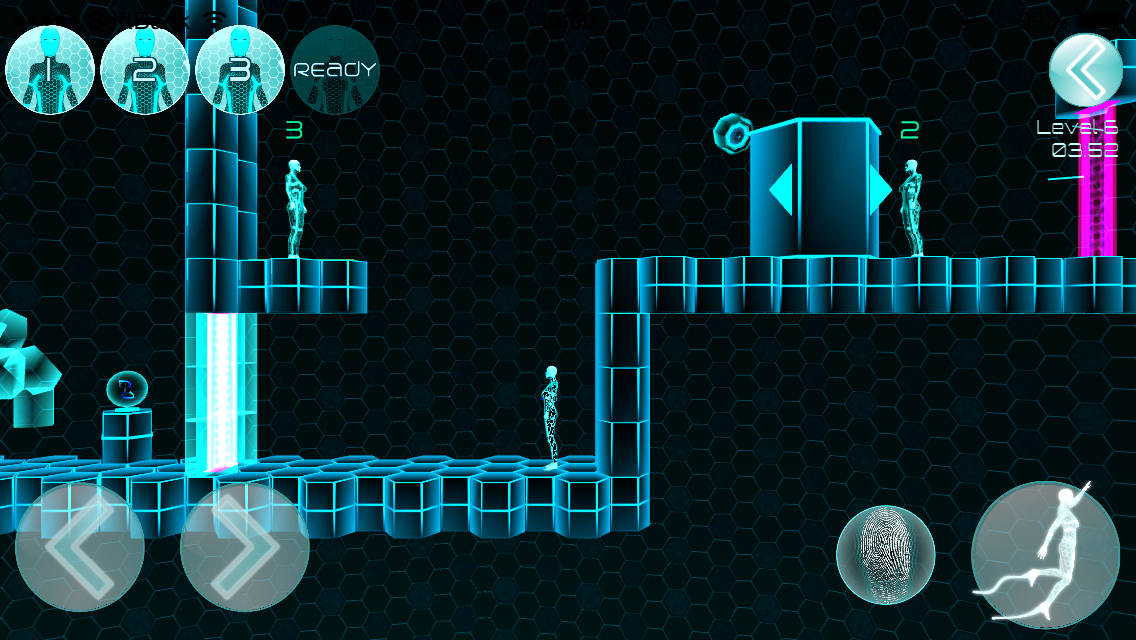 The stages themselves are broken up into gated sections, and while you can pass through those gates, doing so will immediately call back all of your copies. Your copies will also disappear if they try to go through any of these gates. Each of these gated areas serves as a mini-puzzle, allowing the game to introduce a concept in the first area and then build on it with the remaining parts of the stage. At the end of the stage, you’ll be graded based on how long you took, how many instances you used, and how many deaths you suffered. Generally speaking, you have to clear a stage before you can take on the next one, but the stages are broken into five chambers, and you’ll usually open up the first stage of the next chamber before you finish the one you’re on.

Instantion is a tough game. The puzzles require careful thinking and, sometimes, fast reflexes. While the game starts you off slowly, teaching you the things your instances can do and how to use them, it quickly ramps up the challenge, and before you know it, you’ll be having to juggle all three of your copies at once without losing them to a laser or a gate or having them step off the platform you need them to be on. Since Instantion does a really good job of teaching you new things in a non-lethal context, it never feels cheap or unfair, even when it stumps you. The only real complaint I have with regards to the game’s difficulty is that I wish you had more stages to choose from at any given time. Sometimes I got really stuck and I would have enjoyed playing another level to jog a little inspiration in my brain. 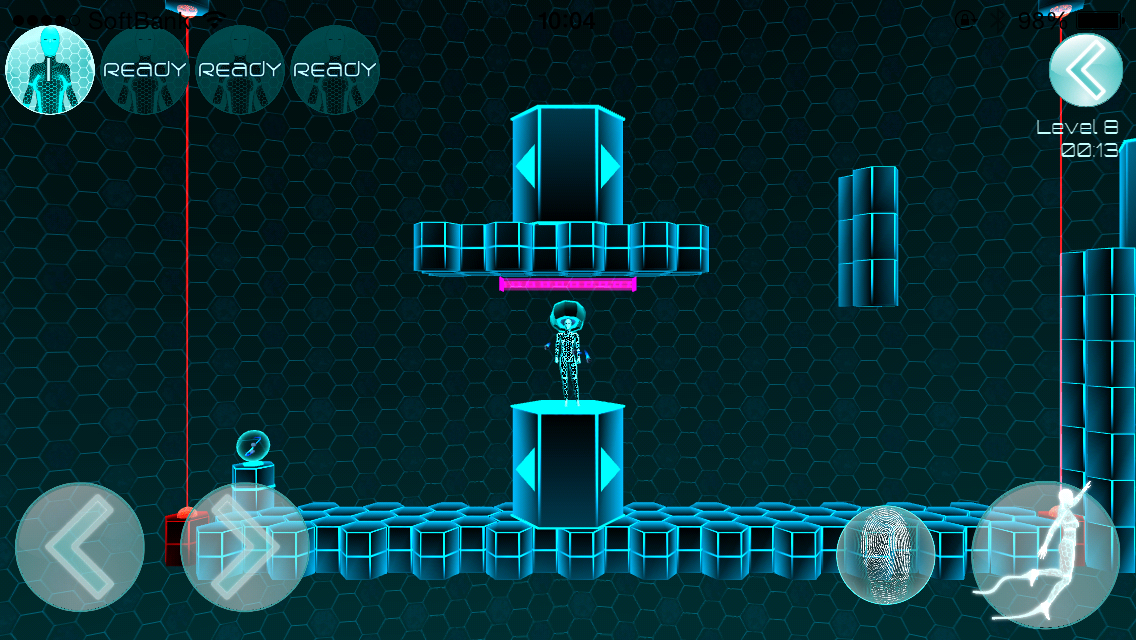 Maybe you’re really good at these kinds of puzzles, though, and you’re wondering if there’s anything with a little more bite to it in Instantion. As you might guess from that lead-in, there is! From the game’s options menu, you can access hard and expert modes. Hard mode removes the refill stations, making you unable to recover any deceased clones. Expert mode piles on the mustard by adding perma-death to the mix, along with auto-saves to keep you from cheating. Hard mode is compatible with any regular mode playthrough you have going and can be turned on or off at leisure, while expert mode obviously has you starting fresh. Turn on one, turn on both, whatever puts a spring in your step, you crazy diamond. I think the game is fairly challenging at its default difficulty, but I think it’s great that the developer has included some options for people who want something tougher.

The only bummer about these extra challenge modes is that the game doesn’t support Game Center leaderboards or achievements, so you can’t even show off if you do the nigh-impossible and beat it on Hard/Expert mode. You’ll just have to be satisfied that you know what you achieved. This lack of Game Center support reflects the spartan approach you’ll find throughout Instantion. You only get one save file, there are no sound or control options, and the interface is about as simple and straightforward as you could possibly imagine. The game’s visual style ties in well with this barebones approach, with a striking design that uses mostly blue lines on black backgrounds, with deadly objects colored red. It looks like something out of Tron, and given the game’s audio, I doubt that’s homage more than accident. The presentation isn’t the most exciting, but there’s a certain oppressive quality to it that makes it feel different. 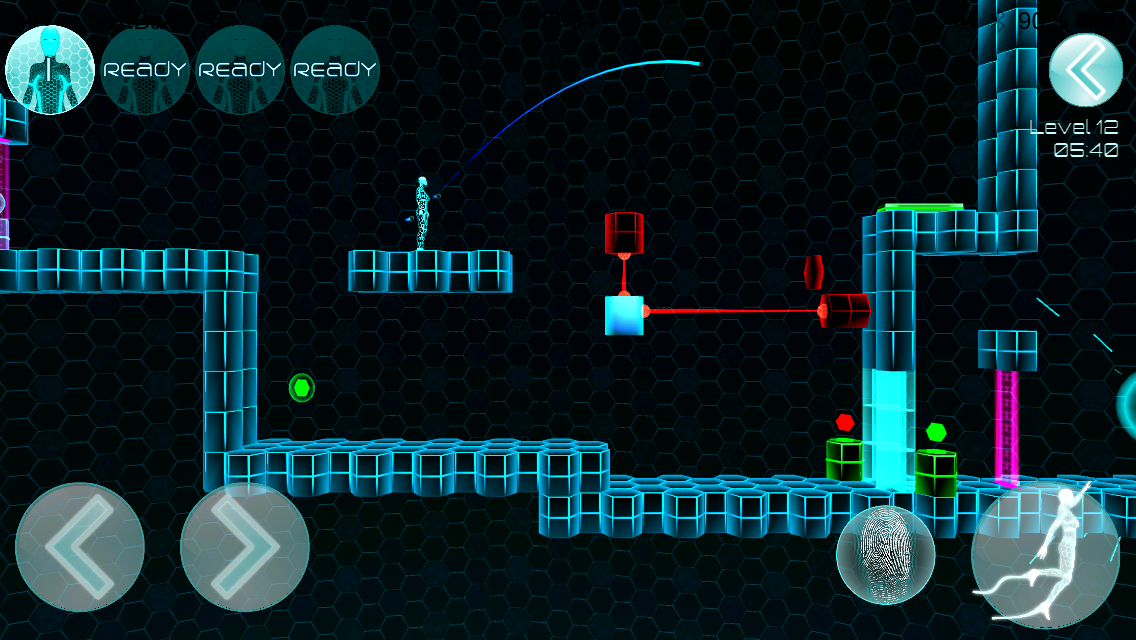 The controls are mostly handled with virtual buttons, with the clone-launching mechanic alone using a flinging control method seen in many mobile games, most famously in Angry Birds (Free). Generally, they work fine, but you will sometimes launch a clone when you only meant to move left or right, the result of which is either harmless or devastating, depending on the stage and difficulty. The clone-flinging works fine, with a line showing exactly where your clone will land, though you have to be careful not to move the aiming as you take your finger off the screen, because it is rather sensitive and small mistakes can be costly.

Instantion contains 50 levels, with each level taking at least a few minutes to figure out even if you’re quite fast to pick up on things, making for a fairly meaty puzzler. The idea of using doubles in this way isn’t completely new, but it’s rare enough that the game feels quite fresh, and the stage designs are solid enough that they would support the game even if it didn’t have a unique gimmick. Throw in some clever difficulty options and a well-realized visual style, and you’ve got something that puzzle fans are very likely to enjoy. It feels a bit bare in terms of bells and whistles, but the gameplay itself is accessible, well-thought out, and fun to play.