Shoot-em-ups are an old, old genre. It’s not unreasonable to say that they are the oldest genre in video games, actually. They were huge, everyone made one, and then some time later, they were no longer huge. Not long after that, they were nearly extinct. They’ve enjoyed a minor renaissance in recent years thanks to the opening of more viable channels for lower budget games, but even now, they’re nowhere near their former prominance. It’s clear that the final blow was dealt by their progeny, the first-person shooter, but even before that, they had taken a heavy tumble. People simply got tired of the same old gameplay and settings. The biggest successes in the post-boom period of the genre try to mix up the themes and settings a bit, so that instead of always being a spaceship or a fighter plane, sometimes you’re a gothic lolita witch or a princess riding on the back of a giant bug. It’s a small shot of freshness for a genre that, for many, feels stale.

Robots Love Ice Cream ($0.99), from developers Dragon Army, is very much a shoot-em-up. It’s a bit hard to tell, just by looking at it, but it’s actually not that far removed from Space Invaders, Galaga, and their ilk. Robot aliens are trying to steal the galaxy’s supply of ice cream, and it’s up to you to fend them off by using the only weapon you have available: ironic punishment. You drive an ice cream truck that can easily navigate the surface of each planet in seconds, and can serve up cool destruction in up to four different flavors of treats. In each of the game’s 20 stages, you have to defeat all of the robots that attack, without taking too many hits yourself or losing too much ice cream.

The robots come in several types, slowly introduced over the course of the game. By the time you reach the stages with all of the major types, simply surviving the stage requires a bit of skill and attentiveness. Some of the enemies are there to go after the planet’s ice cream supply, others are there to hinder or damage your truck, while others are simply there to get in the way of your shots, preventing you from easily hitting more important targets. When they all work in tandem, things can get pretty messy. On top of that, it’s not just about survival, since each planet has its own list of objectives for you to clear. Simply surviving will unlock the next stage, and it’s reasonable to make your way through the whole set of levels without worrying too much about the extra objectives, but if you want to kit your ice cream truck out, you’ll need the extra sprinkles clearing them provides.

In addition to earning them by clearing objectives, you can also pick up sprinkles from fallen enemies. You can use these sprinkles to upgrade your truck, allowing you to bring a selection of three weapons into battle, out of a possible four different types of ice cream. You can also use the sprinkles to upgrade each type of ice cream, making it more powerful. Your default shot is a reasonably speedy, decently powerful single scoop, but you can buy and equip a rapid-fire shot, a spread shot, and a slow but strong bomb shot. There are situations where all of them are useful, but I made the biggest use of the spread shot, because we’ve all known spread shots are the best since the Contra days. Upgrades are fairly pricey, so you’ll either have to buckle down on some extra objectives or open your wallet if you want to fully deck out your truck. It’s not that hard to clear the game with only a few upgrades in hand, but it does feel good to deal out bigger damage. 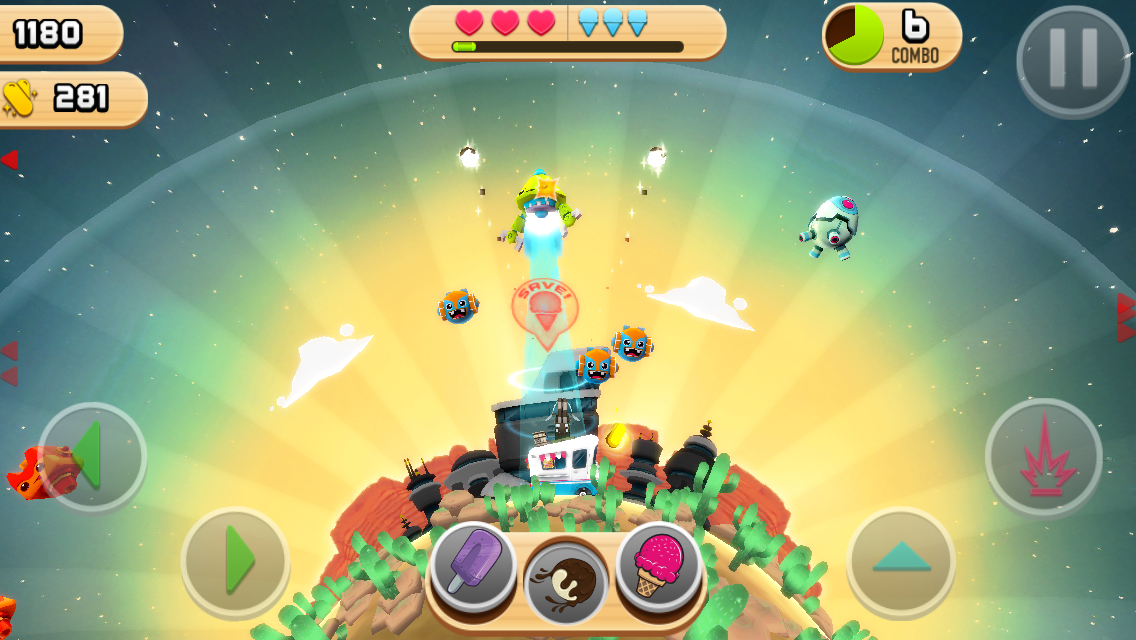 The perspective adds a little bit of trickiness to the shooting action. Rather than moving back and forth along a horizontal plane, you’re actually circling a sphere, so your shots don’t always go exactly straight. It’s a small touch, but it gives the game a different feel from the usual. Off-screen enemies are helpfully indicated by arrows on the side of the screen they’re closest to, and if a robot tries to steal ice cream off-screen, the game makes it very clear. While the backgrounds change a bit as you go and the number of ice cream warehouses varies, the actual practical design of the stages is always the same, relying more on a different load-out of enemies to change things up.

The controls are pretty straightforward virtual buttons, with left and right arrows, and buttons for shooting and jumping. You can select your active weapon using buttons at the bottom of the screen. The layout actually feels a little bit weird since the buttons aren’t beside each other or on top of each other, but rather at an angle to one another. It takes a bit of getting used to, and there’s no way to move the buttons around, so you’re sort of stuck with it. Once you do adjust, though, the controls work quite well. When things get hectic it’s a bit too easy to jump instead of shoot or vice-versa thanks to the odd layout, but mistakes are rarely fatal in Robots Love Ice Cream, so the odd occasions that happens while you’re adjusting aren’t that bad. 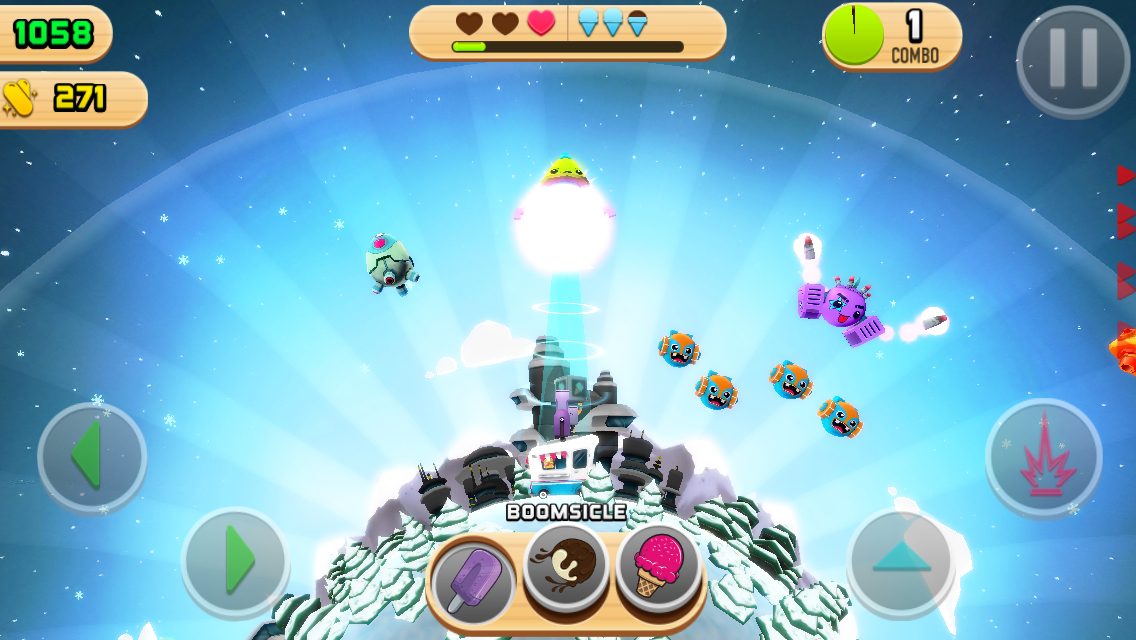 Though the game is generally a bit sparse on options, there is at least Game Center support for leaderboards and achievements, along with some basic audio options. The user interface is a bit clumsy, making it a little hard to find what you’re looking for at times. Aside from that, the presentation is quite good, with bright, colorful graphics, decent music, and good, if sometimes downright strange, sound effects. The visual theme really sets the game apart from most shoot-em-ups, and the sphere gimmick looks nice in motion.

Although the game is a little on the short side if you just have a mind to play through without hitting all the extra objectives, it’s still a satisfying experience. The challenge scales nicely from start to finish, and if you do happen to dig into those extra goals, they’ll provide a test of skill almost from the start. I wish there were more weapons and upgrades to buy. The ice cream theme seems ripe for mining, and the game could use a little bit more variety. Upgrading your truck starts to take a lot of money, so it would be nice if there were more exciting things to buy. Still, this is a really good shoot-em-up with a fun, interesting theme, so if you dig on launching projectiles at things coming from the top of the screen, you’re sure to find Robots Love Ice Cream to be a cool, sweet treat.