Connoisseurs of specialized arcade cabinets have probably heard of DJMax Technika , the South Korean touch-screen based rhythm game. Being an arcade music game with touch controls, an iOS version would seem to be a natural fit and that’s exactly what we have with DJMax Technika Q(Free). With an incredibly fine-tuned and enjoyable rhythm engine, Technika Q is unfortunately hampered by the bloated systems placed on top of its core gameplay.

For fans of the title, Technika Q plays nearly identical to the actual arcade cabinets with touch controls that do a great job matching the original gameplay. For iOS gamers that have never played a DJMax title before, Technika plays similarly to Cytus ($1.99), with players having to hit notes in tune to a beat bar. Where Technika differentiates is with its two separate beat bars on top of each other, with one flowing into the next. It makes for a lot more notes on the screen at the same time, eliminating a lot of the “white space” that some touch-based music games tend to have. Specialized notes such as tap-and-follow and tap-and-hold add some variety but have been seen before. 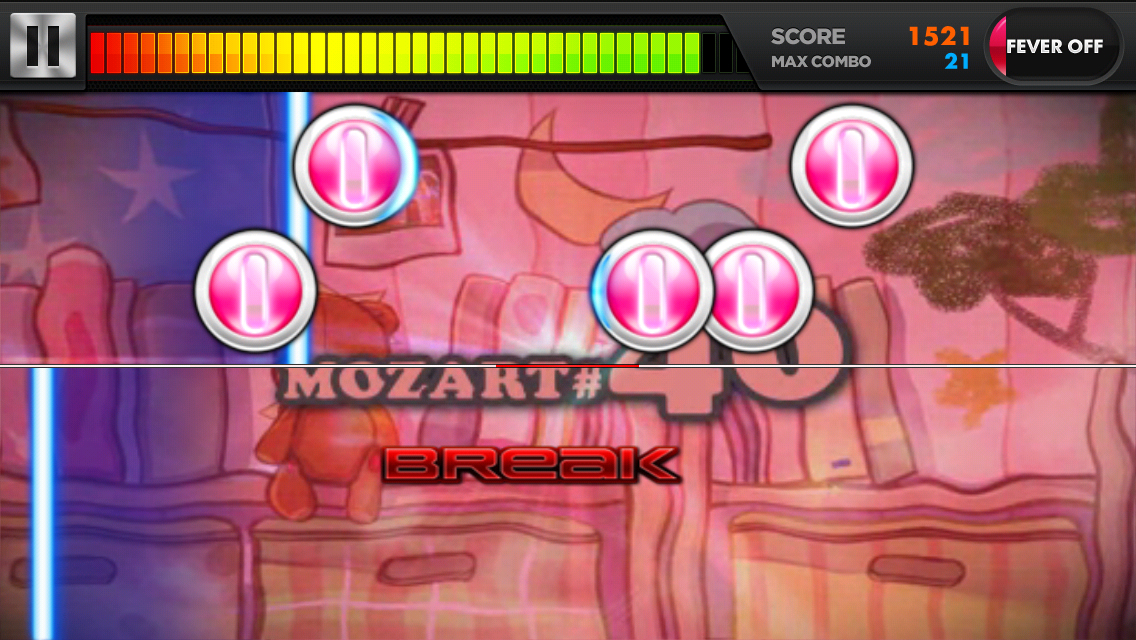 Track-wise, Technika Q covers a wide variety of genres, but offers nothing in terms of recognizable American songs. I don’t think there’s necessarily anything wrong with that, but the fact that players aren’t allowed to preview songs prior to purchasing makes selection a bit of a crapshoot. I’d highly suggest using external means to check out songs to determine what suits your fancy. I thoroughly enjoyed each song I picked up, but I’m the first to admit that music tastes can vary widely. Another important aspect is Technika Q’s inclusion of music videos for every single potential track which adds a lot to the experience but probably is the reason for the incredibly large download size.

From a purely gameplay standpoint Technika Q is probably one of the most hectic and satisfying music games to hit iOS. There’s plenty of song variety (available for purchase, that is), each track has its own music video playing in the background and the note charts are spot on. Easy tracks aren’t boring, hard tracks are actually truly challenging (without being insane), and hitting notes (or not) actually affect the music which I consider an important facet for music titles. It’s certainly possible to simply play tracks and enjoy the music, but Technika also has an incredibly complex inventory and power-up system, all designed to offer players avenues to truly maximize their scores. It really does try to offer something for every type of music fan. 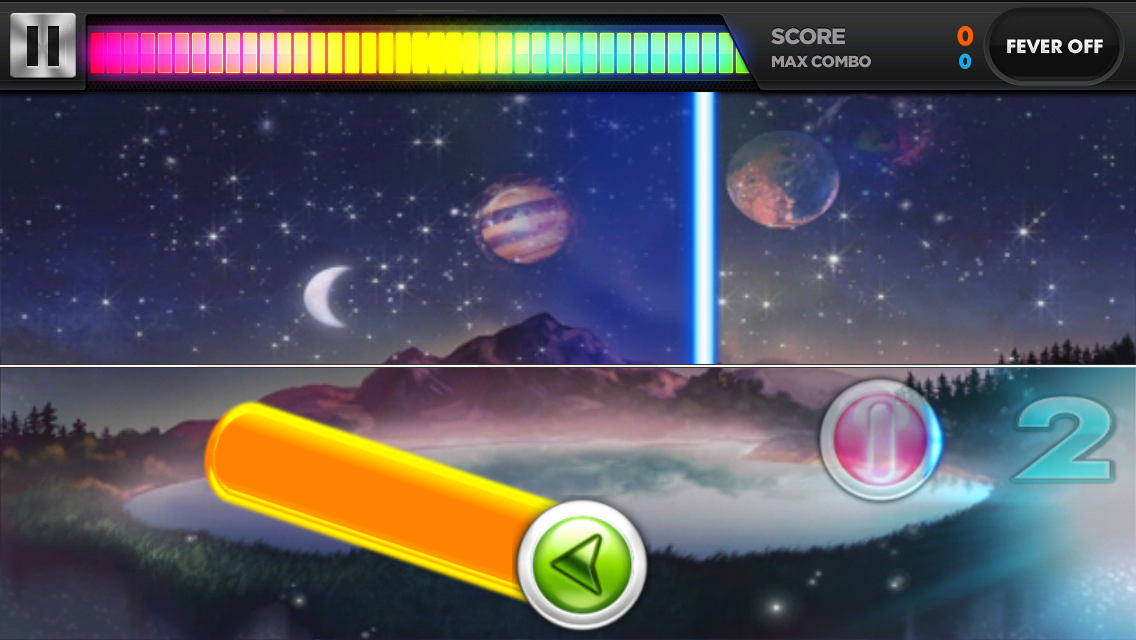 Unfortunately, this mentality eventually gets the better of Technika as it’s bogged down by so many systems and options that it actually becomes a detriment to simply playing the game. Purchasing songs is governed by a convoluted IAP system that has players purchasing premium currency and then converting said currency into songs and song packs. The game requires internet connectivity at all times, which hampers a lot of on-the-go gameplay (particularly on potential commutes with no cell coverage).  Sadly, the servers don’t seem to be entirely stable as the game, on several occasions, told me that my IAP purchases didn’t go through but after restarting I see they were in fact processed.

There’re also a lot of small annoyances, such as unusually long start-up times and the obtuse shop systems. In addition, purchasing all the songs in the game will cost over sixty bucks worth of premium currency which may be a turn-off for folks. Granted, said currency can slowly be earned during normal play, but it’s really not a viable alternative to simply purchasing the currency. Still, that may be worth it for music fans that simply want to own all 80+ songs and don’t want to ever deal with the premium currency system. 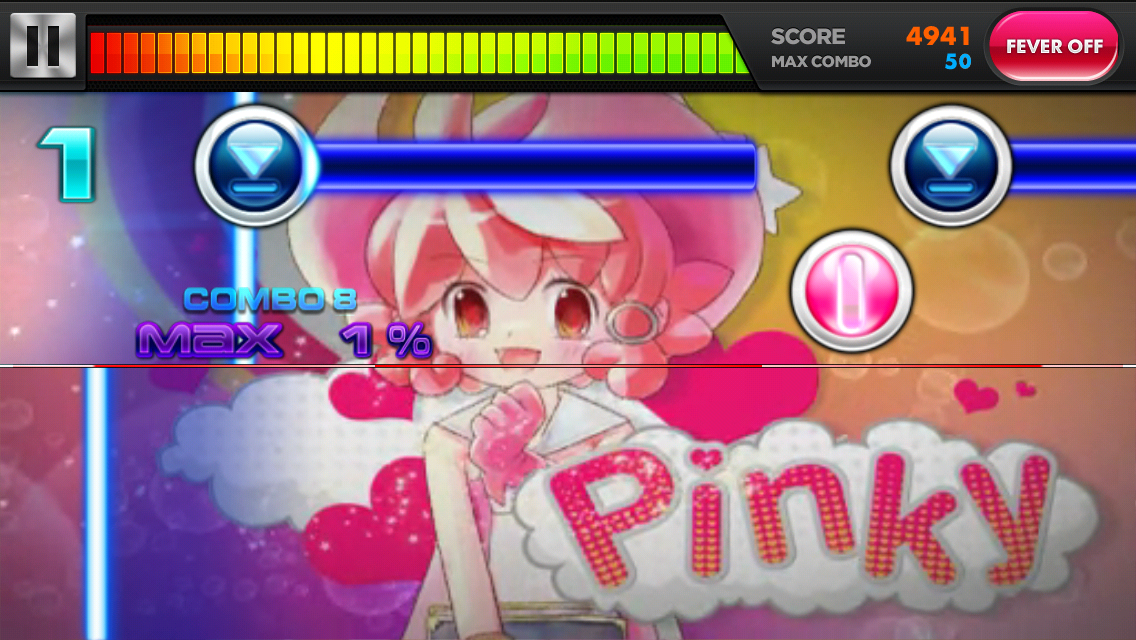 Make no mistake, Technika Q is an excellent rhythm game and is a welcomed addition to the App Store. Unfortunately I think a lot of the extra layers on top of the core game do far more to detract from the experience than add to it. I realize to a certain extent that’s simply part of what makes it a DJMax title, but I don’t think that aspect translates as well to mobile. Regardless, series fans obviously have to check it out and I think it’s worth a download for any that enjoy rhythm titles. For me, I’ll probably stick with the more streamlined experiences of games like Cytus.