When Transport Tycoon ($6.99) came out on iOS, I was thrilled. In my review, I stated how happy I would be, and how happy fans of the series might be, if Rollercoaster Tycoon were to come out on iOS.

Well, it has, in Rollercoaster Tycoon 4 Mobile (Free). But happiness is far from the word I’d use to describe the game. It has some fun qualities, and building a rollercoaster can be enjoyable (although not as in-depth due to the obvious), but the game overall careens down the big drop at the top of the hill, and instead of following along the track, it jumps it and results in a disastrous mess.

You’d think that having to pay to download the game would be a good sign. You’d be wrong. While the upfront cost is relatively cheap at only $2.99, the game is loaded with IAP and timers, and barely five minutes into the tutorial you’re instructed to use a ticket to speed up construction. Tickets, as I’m sure you can discern, are the premium currency. 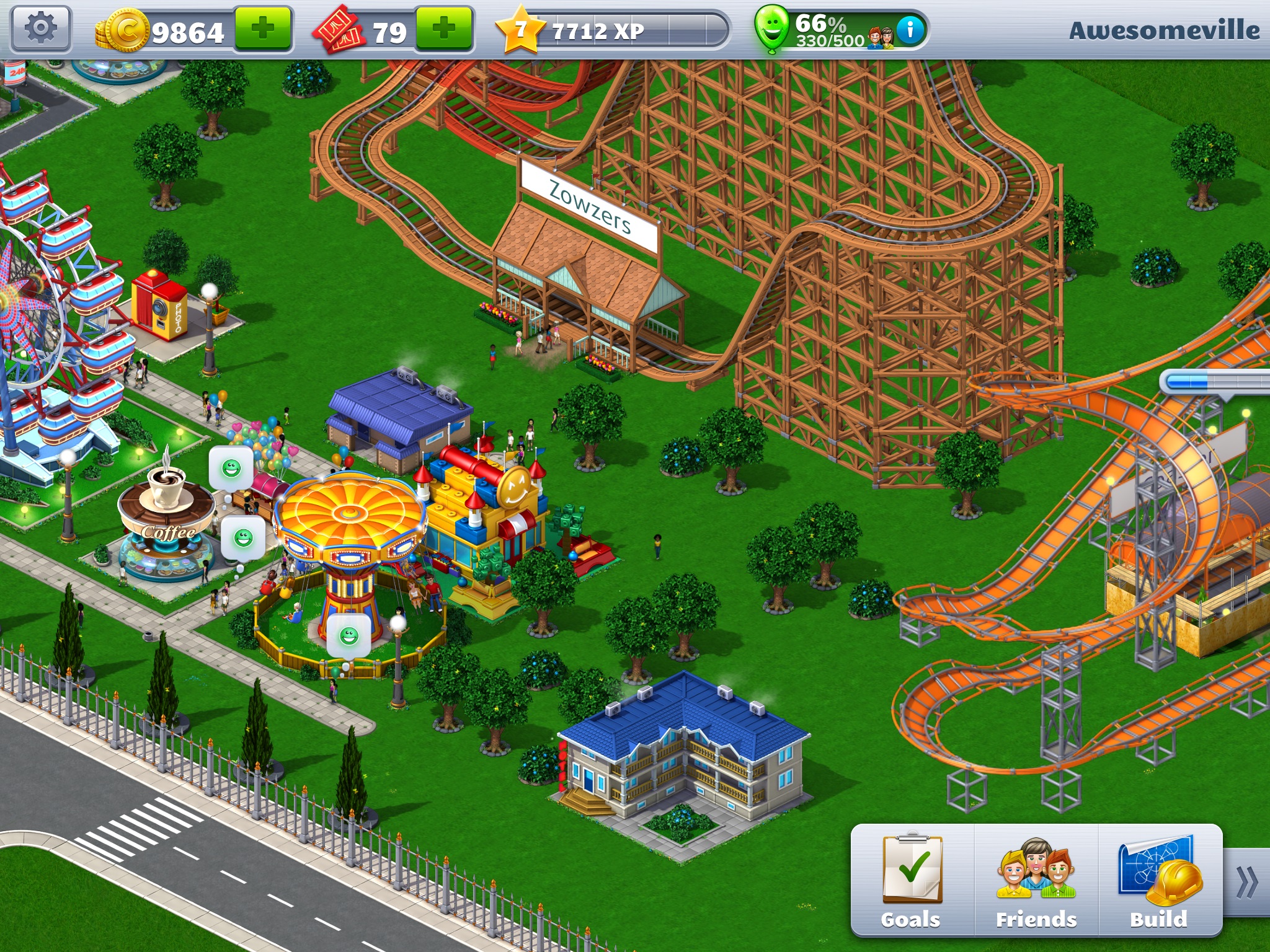 Graphically, RCT4 Mobile harkens back to the original from the 90s, and looks as colorful and energetic as the original did, just not as sharp. From the flashing lights to the coaster tracks to the screams of the people, it’s all been done right. Sound effects are cute and bubbly, but the music is grating and repetitive, with very little variety. As your park grows, the game seems to lag in rendering everything. After starting up the game, objects will render in bits, and it’ll be a few seconds before you see your entire park. It’s slightly odd seeing a rollercoaster train run along what looks like invisible track, simply because it hasn’t rendered yet.

Laying out your park is a simple process. Enter the build menu, find what you want, construct it. There is a good variety of attractions and stalls; carousel, ferris wheel, bumper cars, 4D theater, ice cream stand, pizza stand, coffee shop, balloon stand. Rollercoasters, of course, as well as hotels and a large selection of decorations. With its simple isometric view, it can become difficult to place items as your park expands. There is currently no way to rotate the game screen, nor is there an option to set transparency, therefore making it difficult to build a path behind a ride, especially if that ride is tall. Placing paths does everything: gone is separate queue paths to the entrance with regular paths leading from the exit, it’s all been simplified. Whether that’s by design or perhaps limitations of a mobile touch system, I’ve no idea. 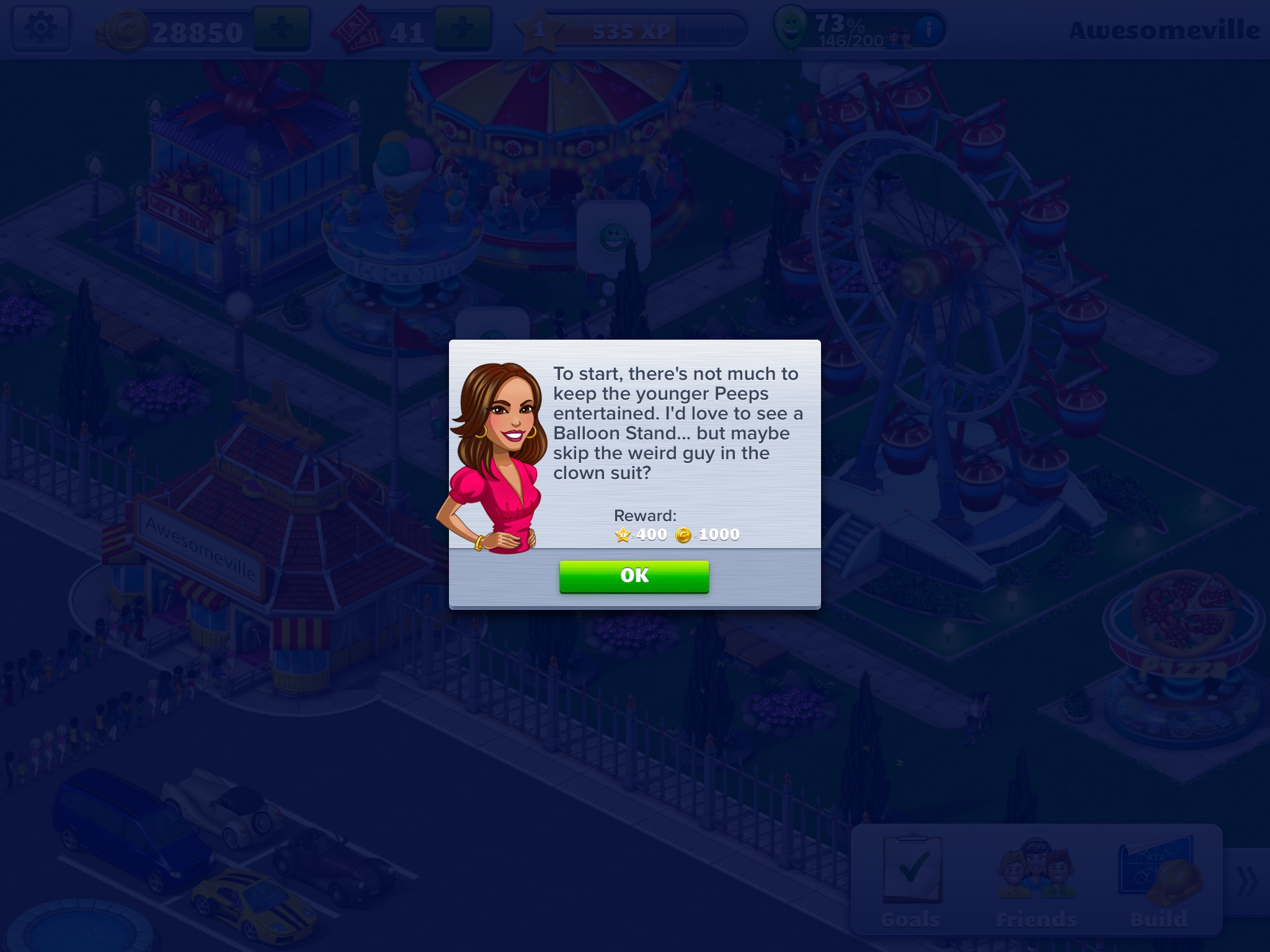 Despite the plethora of buildings available, they all have timers. The cheap, basic ones may be between 30 seconds and one minute, but some of the larger attractions will take hours. Rollercoasters? Definitely hours. The first one you can buy, a wooden coaster, takes the shortest amount of time. The second, steel, after completing my custom track, was a ten hour wait. Some of the pre-constructed coasters cost coins or tickets, but if you want to build your own, it’ll always require tickets: ALL custom coasters require a premium currency to construct, plus a final coin fee to actually build the thing. Building your own coaster is fun, at least, and you have a few special options available, like loops, or a helix. Overall construction is limited in details and scope.

In terms of customization and micromanaging, you’ll find little. The bare minimum that can be changed are the colors of coaster cars, and renaming your park. You can edit a food stand and change its type to that of another food, but this is far from customizing as it changes the entire building. There are no staff to manage, no chain lift speeds to adjust, no individual prices to set.

Each device will be assigned a code that can be used to add friends, which allows you to send and receive up to five tickets per day. 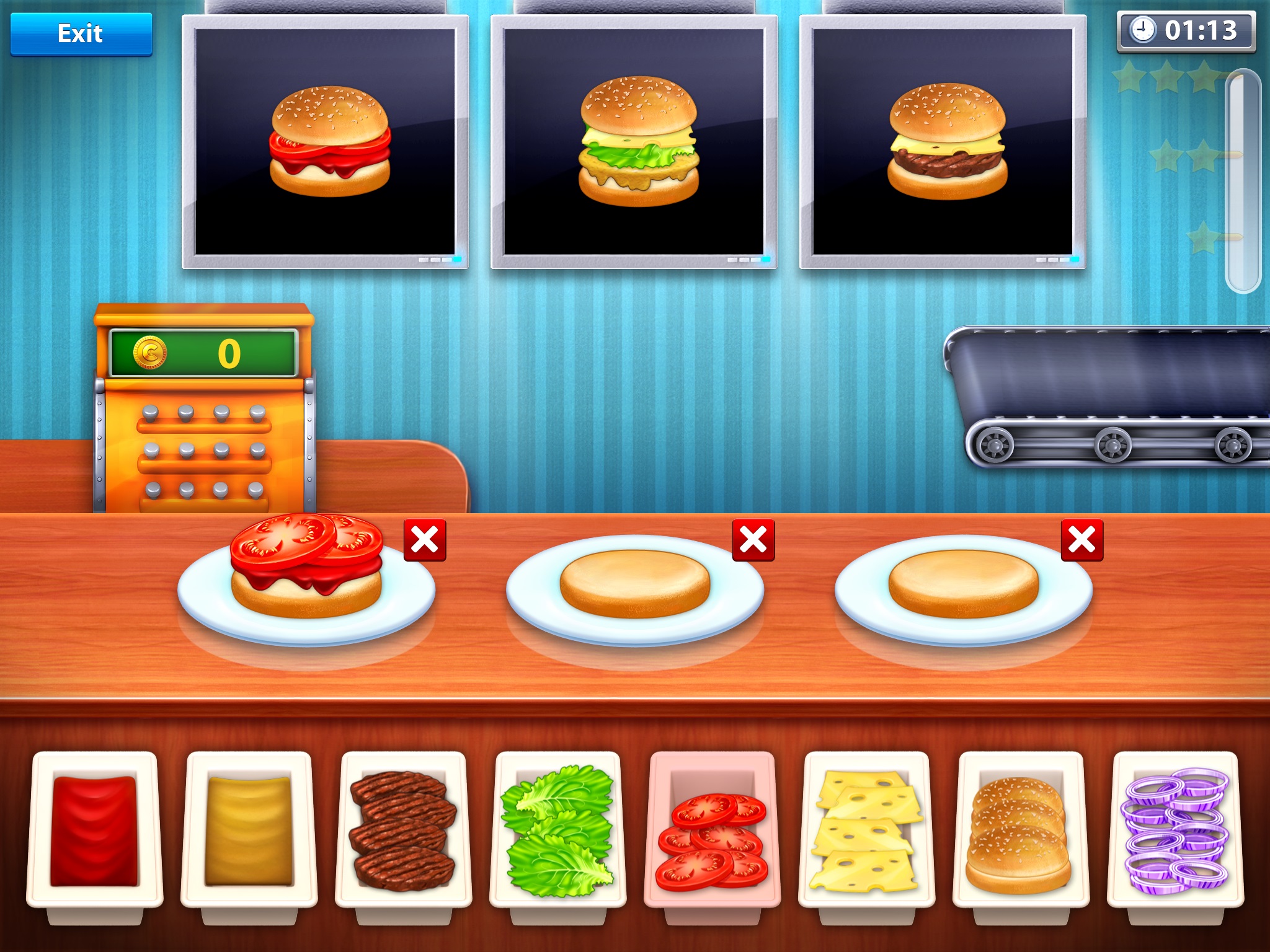 The only redeeming factor when it comes to premium currency is that tickets come in fairly often. Almost every goal, at least for the first little bit, will award a ticket or two. Once you get expanding, goals start awarding just coins, but they still have ones that pop up with a ticket reward now and then.

There is a minigame available that lets you build burgers, which you get by purchasing the Food Rush Truck from the Special buildings category. It’s kind of out of the way, and says it’s a limited time only, but doesn’t say why or what for.

Rollercoaster Tycoon 4 Mobile is a fun diversion if you’re willing to spend money, or if you have no issue waiting hours for a timer to expire. If you’re a fan of the series, you are going to be severely disappointed, perhaps angry, and will hope that the PC version doesn’t contain any of the poor decisions that went into this one.