Donut Games has been around the iOS scene for quite a while now, and while they might not be the first name you think of when it comes to big hits on the platform, they’ve actually been quite successful with a number of their games. One of their first games, Monkey Flight ($1.99), proved to be a pretty big hit with its combination of gassy monkeys and gameplay somewhat reminiscent of Angry Birds (Free), and has enjoyed many updates in the half decade it’s been out. Beyond the fact that monkeys are generally a pretty big crowdpleaser and that flinging animals at things is something of a national sport for mobile gamers, Monkey Flight also gave buyers a great value for a reasonable price. There are a ton of levels, and updates only added more, along with new modes of play.

One of the potential pitfalls of making a sequel to a game like that is that there is a very large risk that you’ve already sated the demand for the concept. How many levels of launching monkeys at fruits does one person really need? Hitting that point where adding new levels just isn’t enough for a sequel is something even the mighty Angry Birds had to deal with. All of the updates only contribute to the problem. Things like retina graphics, which can at least create a strong visual difference, have already long since been added to the first game, and players who enjoyed the initial set of levels and may have been looking for more have already received a bunch of new ones in free updates. Making a sequel has always presented the dilemma of going the safe route or doing something wild, but laudable update schedules like Monkey Flight‘s really make the former route look like a bad idea. 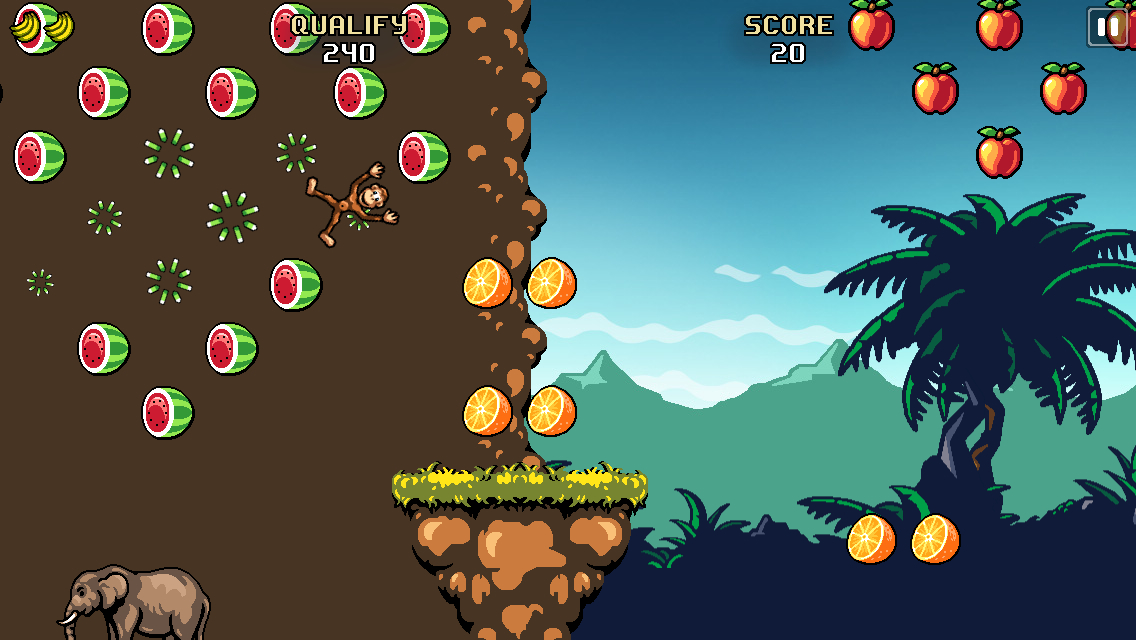 Donut Games has fully opted for the safest possible route with Monkey Flight 2 ($1.99), and it makes the game a little hard to recommend. As in the first game, each stage sees you launching a monkey who seems to have the powers of that greatest of Marvel superheroes, Speedball. The monkey will bounce off of the ground, the boundaries of the level, and many other objects until it finally loses enough momentum and comes to a stop. Certain objects can kill your momentum immediately, such as mud puddles or log piles, while other objects will give you a little extra bounce, like elephants or clouds. Your goal is to collect a quota of fruit, different for each stage, before your monkey comes screeching to a halt.

You only get one shot, and once the monkey has launched, you’re mostly a spectator, save for your ability to make your simian avatar break wind by tapping the screen. Just like in real life, this launches the little fellow up in the air, giving you a precious extra bit of momentum while helping you avoid showstopping obstacles. You can only do this two times per launch, though, and once they’re spent, you can only watch. Watch, and pray. Collect the bare minimum, and you earn yourself a star, but if you want three stars, you have to go well over the quota. There’s a bit of strategy involved in how you angle your shot, how much power you use, and when you use your weapons of mass destruction, but you still end up watching the monkey bounce around on its own more often than not, hoping to heck it somehow bounces off the right thing to collect enough fruit. 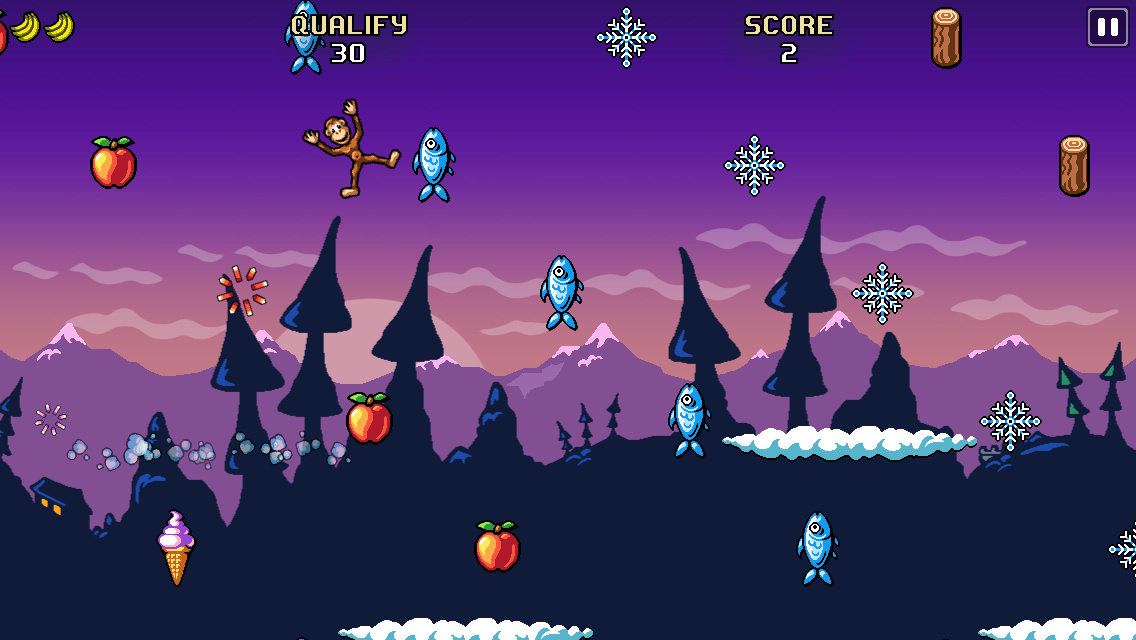 If you don’t, you have a choice between starting the level again or using the game’s only item, a life preserver. Using the preserver allows you to either retain your current score and take another shot to add to it, or permanently add a third use of your boosting ability to the stage. You get one preserver for free, and it regenerates every twelve hours or so, but if you need more, you can buy them via IAP. Since this is basically a cheat, I think the way they’re set up is quite fair. You never actually need a preserver to clear a level, but it does offer a daily free chance to those who are stuck on some of the more vexing boards.

All of this, however, can be found in the first Monkey Flight. The sequel actually offers very little beyond that game, apart from a new set of 150 levels and a few cosmetic changes. The number of modes has been cut down from three to just one. There are no new gameplay concepts at all, as near as I can tell. Even the objects found in the stages mirror those in the original game in function and, frequently, appearance. There are three different worlds, each with 50 levels, but in terms of mechanics, they’re the same except for a different coat of paint. Looking at the other games from Donut Games, we can expect a lot of updates to Monkey Flight 2, and the modes cut from the first game will probably reappear in some form eventually, but it’s kind of weird to have a sequel offering less than the original it’s sitting beside on the virtual store shelf. 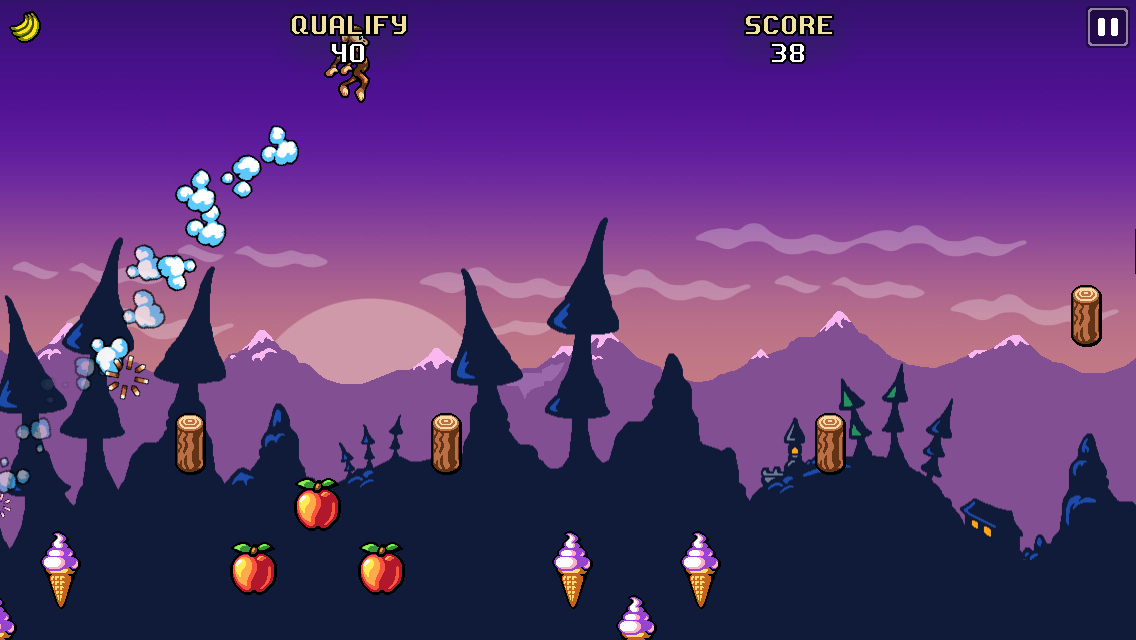 Taken on its own, the game is decent mindless fun, though it’s even more of a fire and forget experience than Angry Birds. The graphics are colorful and cute, the bits of music are bouncy and fun, and the sound effects feature both monkey sounds and fart noises, which I don’t have to tell you is a grade schooler’s delight. The game has Game Center support for leaderboards and a fairly ordinary set of achievements. Monkey Flight 2 has a ton of levels to play, and you can switch between the three worlds any time you like if you get stuck on a level in one of them. The early stages in the first world make the game seem very easy, but the difficulty ramps up nicely in the long run, so if you don’t want to rely on dumb luck with random launches, you’ll have to start planning both your launch and your gas usage carefully.

Monkey Flight 2 is a very repetitive game, and you’ll pretty well have seen everything the game is ever going to throw at you by the third or fourth level. I could see kids enjoying this game a lot, and in the right context, even some adults, but it’s not well-suited to more than a couple of minutes of play at a time. It’s certainly packed with content, and it’s very likely to get more as time goes on, but whether or not anyone actually needs that much of this content is questionable. As a sequel, it’s far too safe when it needed to be bold. While I’m sure there are people out there who finished the first game completely and are hungry for more, I think most people are going to be satisfied enough with the content of the first game that they’re not going to need an unambitious mission pack sequel like this game. On the other hand, the monkeys do fart.