America’s pastime. Butt-patting. A League of Their Own? Whatever word, phrase or movie may make you think of baseball, the sport has been played, changed, and even endured a lockout. But one facet has remained the whole time: it’s fun to play, less so to watch. R.B.I. Baseball 14 ($4.99) is a modern take on what was a classic NES game almost thirty years ago. The original is known not just for being a fun game, but for being licensed by the MLBPA, which resulted in the first console game to use actual player names. Developed by MLB Advanced Media, this updated version stays faithful to the original.

If you’re looking for a stat-heavy simulation, look elsewhere. R.B.I. is an arcade baseball game in every sense of the word, from pitching to batting to base running and fielding. It is also basic in terms of gameplay, allowing you to play an exhibition game, a full 162-game season (or shorter seasons, coming in at 81 or 52 games), or post-season. Playing a season takes you through a calendar-based set of games; there is no team management, no stadium upgrading, no training, just good ol’ baseball.

MLBAM did a decent job in bringing the game to life, with graphics that are nice but not outstanding. Animations are occasionally jerky. There is not much to be had in terms of sound or music, but that’s also the draw of the retro feel. You’ll hear umpires call you out, safe, announce double plays, and get excited for home runs, but there is no play-by-play commentary or player announcements. The roar of the crowd is constant, but can thankfully be turned down.

Playing a nine inning game can be as short as half an hour, if not quicker, depending on how well you play. There is no saving mid-game, but because they go so quick, it doesn’t seem like a big issue. Teams appear to play just like they do in real life, with my home team of the Toronto Blue Jays getting beat -badly- by the New York Yankees. Although, the Blue Jays getting beat badly by any team is pretty much an accurate representation.

Pitching and batting are dead simple to perform. The stick on the left allows you to move your pitcher on the mound or batter in the box, and also doubles as pitch/swing direction. Moving the stick up or down will change your pitch from medium (standard) to slow or fast. One tap is all that’s needed to send out a pitch or whack the ball (with a separate button for bunting). Stealing bases is as easy as double tabbing the window when you’re at bat, and base running is accomplished by swiping along the diamond after a hit. You can substitute pitchers, but that’s it in terms of management or customization. 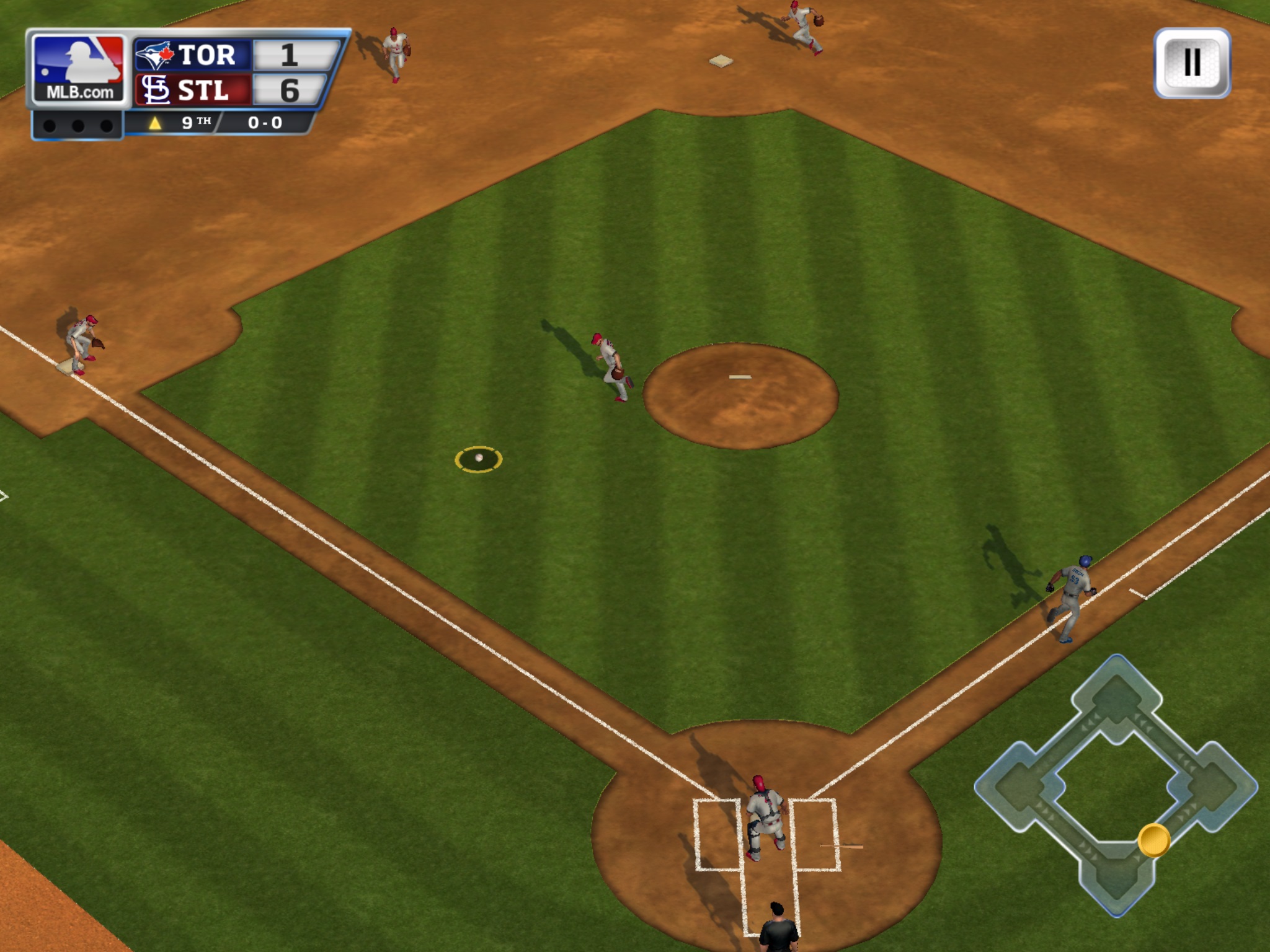 Fielding, in its current state, is very hit and miss. When you have standard fielding set (all controlled by you), it can be difficult to judge where your players are in relation to the ball. There is a ball height indicator (larger the shadow, higher the ball is), but the camera doesn’t react quickly enough to allow you to get a bead on it, and oftentimes you’ll miss a lot of non-pop flys because of it. It’s basically the camera being unable to show your player in time to catch anything that isn’t near that player.

The AI performs some questionable calls as well. During one game, my runner heading to second base was declared safe, despite the baseman having the ball before I got there. You’ll notice the AI outfielders making catches when it looks like they’re nowhere near the ball. Not even dive catches. The ball must have a large hitbox of sorts.

Since games can be played quickly, you’d think that there’d be someone sort of multiplayer component. Sadly, there isn’t. No same-device play, no local or online multiplayer. Seems like such a shame that will hopefully be addressed in an update.

Achievements in R.B.I. Baseball 14 are varied, from winning via the mercy rule to getting five grand slams to striking out one thousand batters. In addition to their regular home and away uniforms, each team has a retro uniform that can be unlocked by completing a challenge. The Toronto Blue Jays, for example, can unlock theirs if you get eight strikeouts in five consecutive innings during a season game, while the Seattle Mariners require you to score four runs in an extra inning. There are leaderboards that track simply how many games you’ve won. There is no IAP.

Don’t purchase R.B.I. Baseball 14 expecting a deep simulation, stat tracking or micromanagement. Do expect a terrific arcade style game that is simply fun and can be picked up and played whenever, that stays true to its source. Batter up!