Whenever a new competitive freemium game hits the market, there’s always a mad dash to try and get to the top of the leaderboards. Unfortunately, the only surefire way of doing that is to simply buy your way to the top with significant IAP buys. While Supercell’s Boom Beach (Free) doesn’t deviate from that norm, there are still plenty of tips and strategies to follow in order to minimize the time and money spent on the game.

We’ve already offered up some beginner tips and strategies, as well as provided a full review of Boom Beach if you’re completely new to the game and wondering what it’s all about. The following are a few nuggets of information that should help in expanding your island empire without needing to invest heavily in diamonds. 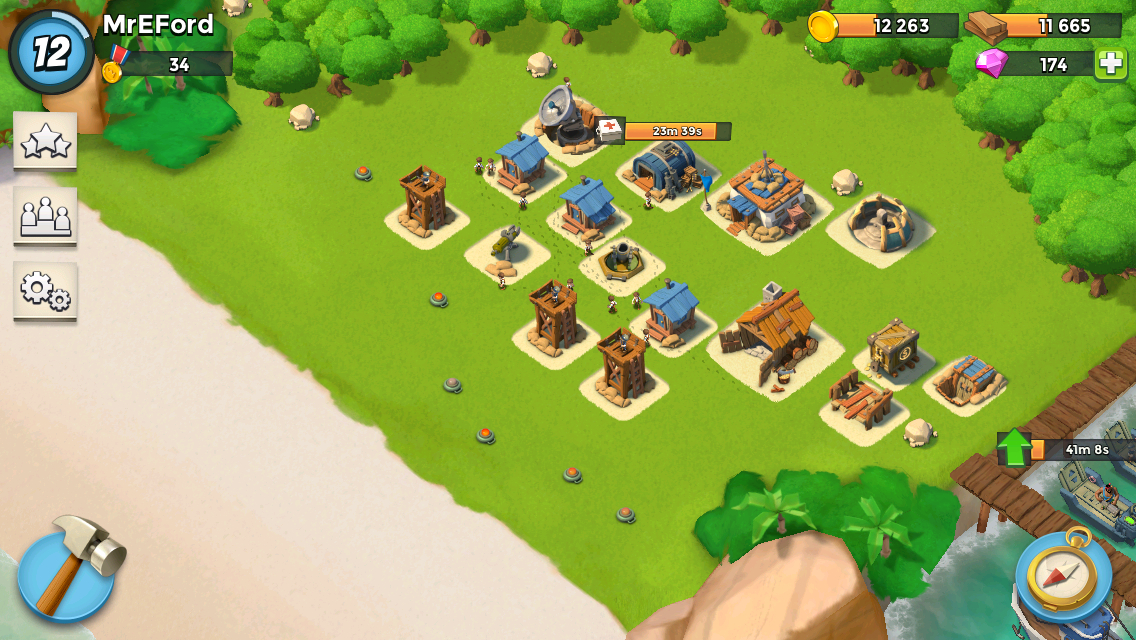 Plan Your Upgrades Several Moves Ahead

Starting off with some resource tips, it’s imperative that you have a long term upgrade plan when collecting resources and upgrading buildings in Boom Beach. It sounds obvious, but the timers in the game have a tendency to create player scenarios where currency storage is maxed out (which means you aren’t earning any more) without any place to spend it. A good rule of thumb is to always make sure your Armory has a few available upgrades (so you can cash in your gold) and your other buildings have upgrades ready to go. The goal is to never be waiting on a headquarters upgrade with the rest of your buildings maxed out because that’s a surefire way to get caught with maxed our resources.

Be Mindful of Resource Requirements

This goes hand in hand with the above tip regarding planning upgrades. If you have your eyes set on upgrading a certain building, make sure that you actually have the capability to upgrade. There’s nothing worse than collecting resources and realizing that you haven’t upgraded a warehouse enough to actually have enough stored resource for an upgrade. Sounds stupid, but I’ve had that happen on occasion because I was more focused on the upgrade and assumed that I had enough warehouse space for all the resources, which lead to me wasting time and effort on improving my storage buildings (and typically lead to situations of maxed out resources).

Save Your Diamonds For Upgrades That Require New Resources

Boom Beach’s premium currency exists solely to speed up timers; there aren’t any special towers or builders that you can save up for. Thus, there’s no need to horde diamonds indiscriminately. However, I would suggest that you save them for certain upgrades that are particularly tough. For example, once you unlock the stone currency, your headquarters will require one more upgrade in order to unlock the stone quarry (which produces stone). However, that HQ upgrade also requires stone which at this point can only be earned via island raids. If you don’t want to spend all your time raiding, this is one of those areas where I’d recommend spending diamonds to speed up the process and unlock a reliable generator for that new currency. 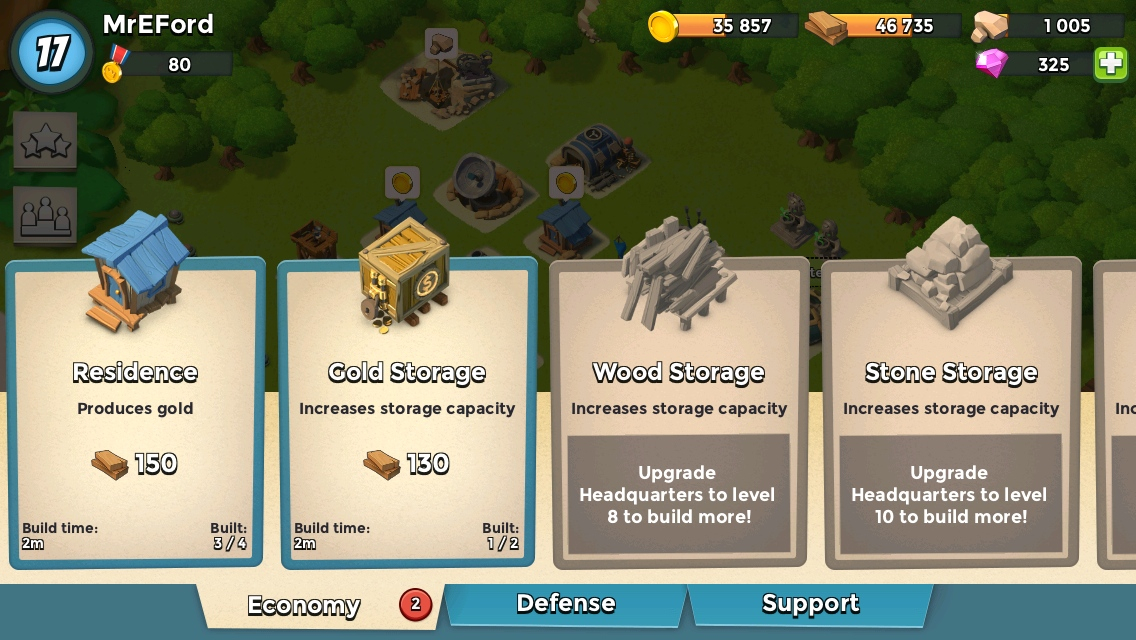 Obviously, the key to success is to eventually have all your buildings upgraded, but I’d suggest putting somewhat of an emphasis on keeping your vault upgraded. It’s not the most glamorous building to invest in, but not only does it keep more of all your resources “safe" in case your base gets raised, I think it also makes you less of a likely raid target (although a good player will raid anyone all the same).

Moving on to some guidelines for battle, whenever a player attacks you the game always stores a film of the battle. Regardless if it was a win or loss, I’d highly suggest reviewing the film to look at the strengths and weaknesses in your base. I’ve had experiences where a loss on my part was simply due to a defense tower being slightly misplaced. In addition, checking out a replay is also a great way to develop new offensive tactics when taking on your own opponents.

If you’re looking for specific advice on how to build your base, I’d suggest checking out the islands of other players. Otherwise, make sure all routes into your base are covered by towers and mines and try to minimize having towers really close to each other as splash damage isn’t a fun issue to deal with.

Be Prepared for Radar Upgrades

Radar upgrades allow you to expand your map, giving you more access to bases to ransack and collect resources (as well as victory points). Another not-so-advertised effect of radar upgrades is it makes you both more susceptible to attacks from stronger players, as well as opening up the same stronger opportunities for you as attacker. Obviously one of the key’s to eventual success is to take over as much of the land as possible (which requires radar upgrades), but I’d recommend not indiscriminately upgrading your radar before your base is ready. Make sure all your defenses and troops are appropriately upgraded prior to opening the proverbial flood gates to harder opponents. 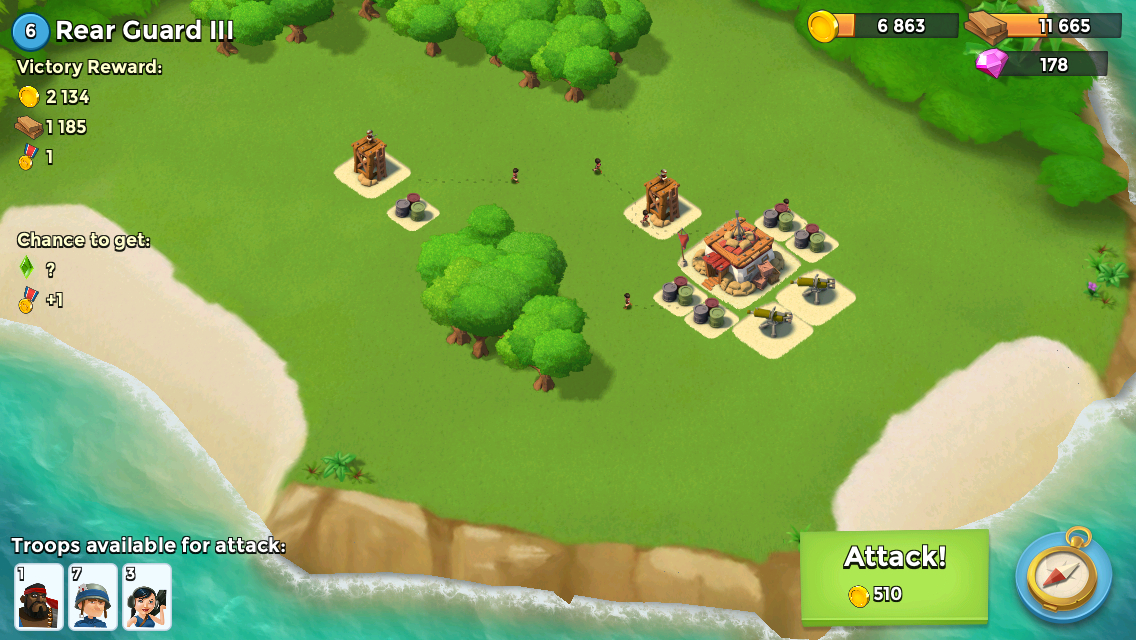 This is one of those standard tips for freemium games, but it’s always worth repeating. Practice common sense timer management. If you’re going to bed, upgrade a building that has a longer timer. During the day, work on the items with shorter upgrade times so you can do multiple ones in a single day. The goal is to minimize the likelihood of needing to waste diamonds simply to speed up upgrades. Also, unless you’re trying to save up for something, try to spend as much of your resources at night; it makes it less likely you brush up against a resource cap when you collect everything in the morning and makes you less of an inviting target for night-time raiders.

Make no mistake, the further you get in Boom Beach the longer the timers are going to be regardless and the greater the urge will be to pick up diamonds. However, keeping the above fundamentals in mind will should allow you to upgrade your island as efficiently as possible.