Truly, block puzzles are one of the unsung staples of gaming’s history. They’re an essential part of many great games across a variety of genres, a figurative Kit-Kat break between fighting Ganon’s minions or dealing with a sarcastic rampant AI. Even though we cherish them as a tasty spice on some of the biggest games around, games built solely around block puzzles have had to settle for being niche products since almost the beginning of the hobby itself. A lot of that, I think, comes down to their repetitive nature. Once you’ve nailed down a few key strategies, even large puzzles become a sequence of rote actions. That’s fine for something you’re going to pick up and play here and there for a few minutes, but it’s not well-suited to a big adventure. CLARC (Free) is, at its heart, not much more than a block puzzle game. If you absolutely hate doing that type of puzzle, you’re probably not going to be convinced otherwise here.

CLARC is no mere Sokoban knock-off, however. It’s a shockingly beautiful and decidedly complex game that happens to rely on moving blocks around to traverse its 25 stages. You’ll be using a wide variety of blocks for all kinds of purposes, including offense, defense, boxing in enemies, connecting power by rerouting deadly lasers, as well as the usual depressing of switches. Moreover, you’re frequently having to do all of this very quickly, adding a vital reflex component to keep things tense. It is at times positively aggravating and occasionally mind-bending, but I absolutely have to respect both CLARC‘s seeming goal of being the grandest block puzzle game that ever was, and how much it does towards realizing that. 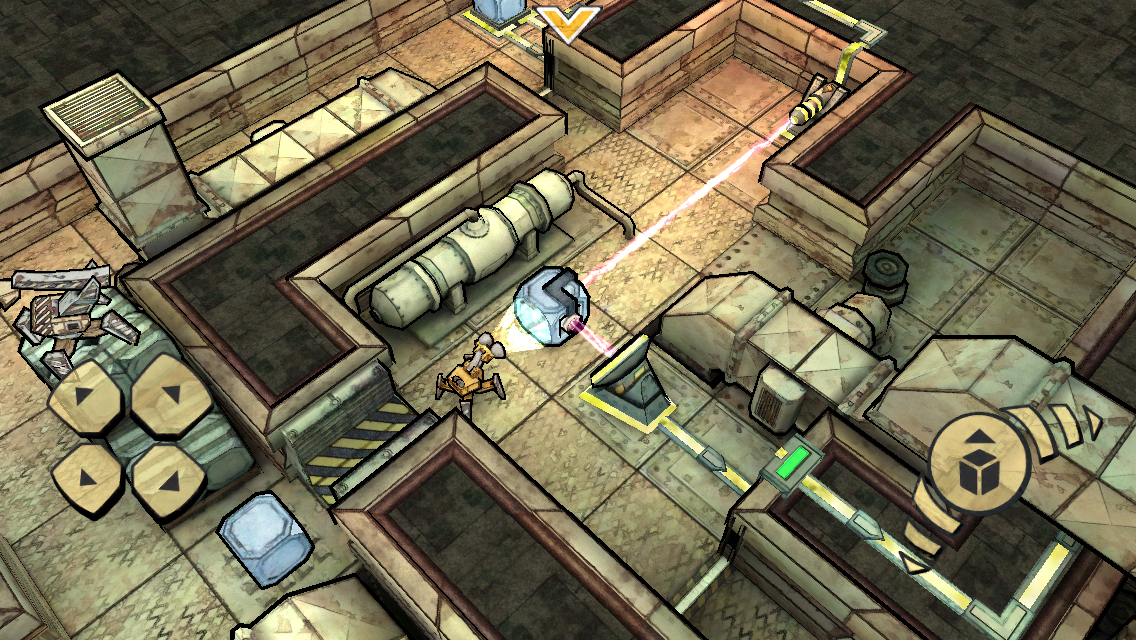 CLARC is an action-puzzle game, and while I’d certainly say the puzzle is the axis around which everything turns, the action is no slouch in the long run either. You play as a little maintenance robot named CLARC, who is initially reactivated to fix a power outage, but quickly finds himself up to his bolts in a very messy situation that he’s ill-equipped to handle. CLARC can’t do much more than move around, pick things up, and put them down. He can rotate while holding an object, but only if nothing gets in the way. If anything harmful touches him, he collapses into a heap from so much as a brush. It’s unfortunate for him, because he’s going to have to come face to face with a lot of very dangerous things if he wants to save the day.

Everything you need to do is accomplished via this small toolset. The left side of the screen is divided into four directions that you can touch to move CLARC around. The right side of the screen has a button for picking things up or putting them down, and can be swiped to move the isometric camera 90 degrees in either direction. Most of the complexity in the game comes from the different things you can do with the blocks you pick up. Depending on which of the many types of blocks you’re holding, you can block lasers, redirect shots, or cage enemies in. It’s important to pay attention to exactly what kind of block you’re holding, and from which direction, because many of them allow shots to pass through in one direction or another. In certain levels, you’ll also have to carry along a drone buddy. Needless to say, you need to be careful with him, since he’s just as fragile as you are, and losing him means failing the level. 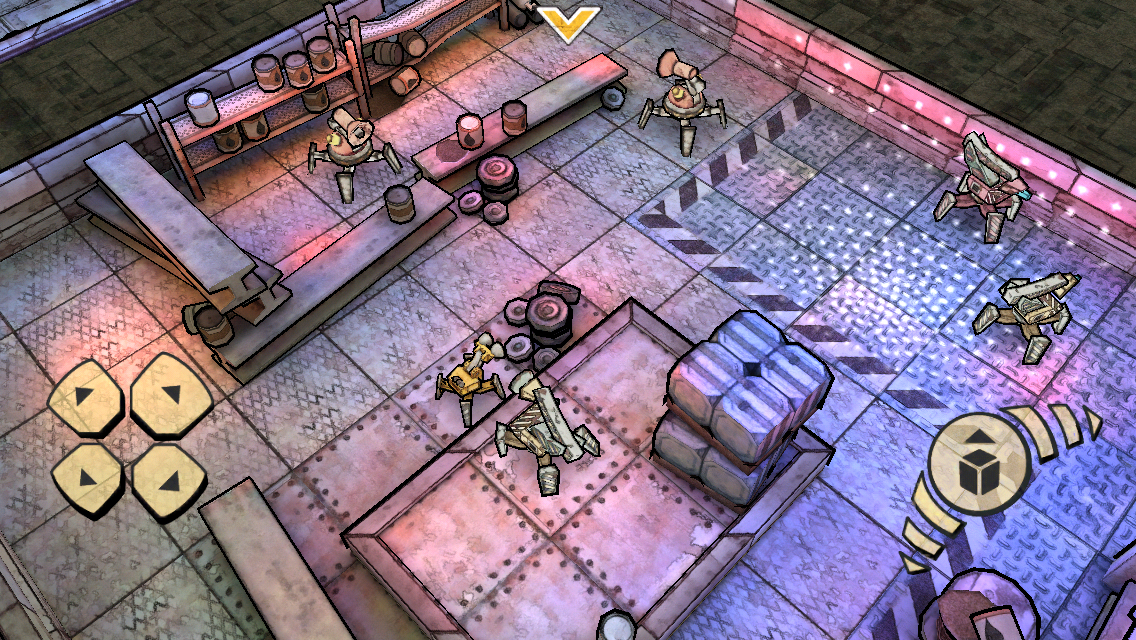 There are many types of puzzles you’ll have to solve with these abilities. Even a puzzle as basic as dropping a block on a switch requires you to navigate some tight spaces, which is not an easy thing to do while carrying a block. If you’ve ever tried to move a sofa around a small 90 degree corner, you know what I’m talking about. You also have to make sure you leave yourself a path to get out, so sometimes you’ll need to back into a switch. In addition to flipping switches, you’ll have to solve a lot of puzzles by using blocks to redirect deadly lasers in order to restore power to doors. Sometimes, you’ll have to escort a drone as he makes his way through a different path, forcing you to quickly open doors and redirect hazards before he walks into them. There’s also a stealth and chase aspect to the game, in the form of dangerous tank robots that will hunt you down and destroy you. Sometimes you’ll be able to destroy them or box them in, but more often than not, you’ll simply have to outmaneuver and outrun them.

The escalation of the puzzle difficulty is quite smooth. In the early going, a few relatively simple puzzles in combination with getting to know the world and the way things controlled was enough to keep me engaged. Each level brought a gradual increase in both complexity and risk, without ever losing me by taking too big of a step. New elements were introduced at a steady enough rate that I never had the feeling that I was jogging on a design treadmill. You even get a brilliant boss fight at the end that encompasses a few different puzzles. It depends on how quickly you catch on to the puzzles of course, but CLARC will probably take you at least a few hours to clear on your first run-through. For a game that revolves around block puzzles, it’s quite remarkable that it keeps up a good pace for a runtime that long. 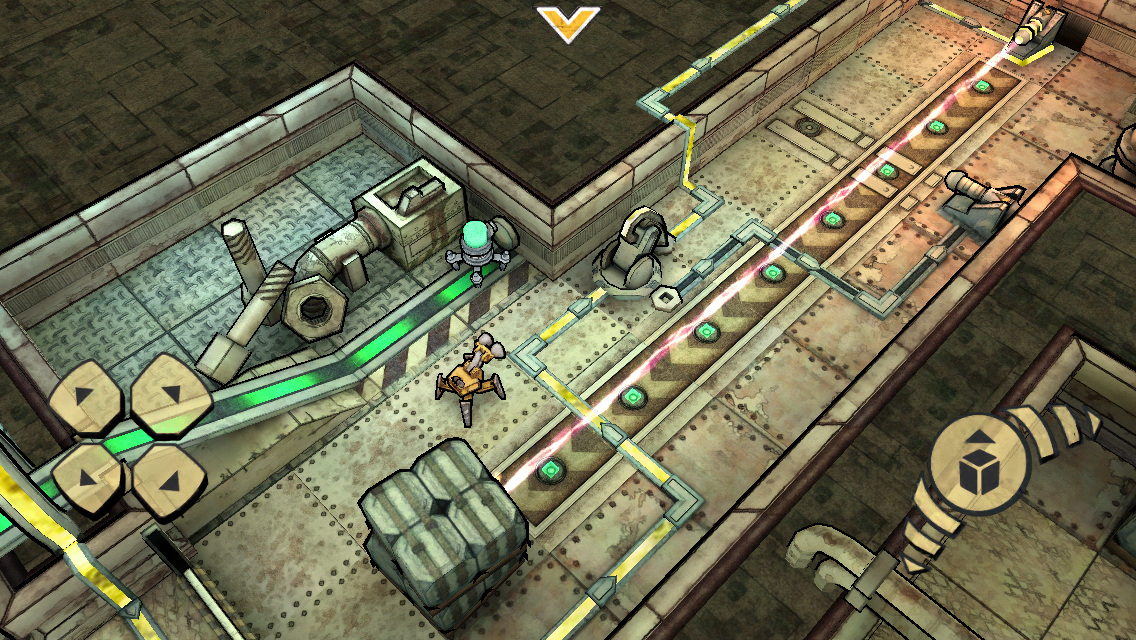 Helping that is the game’s gorgeous presentation. The graphics ooze style all throughout, with a subtle cel-shaded look and a good use of colors. The backgrounds are insanely detailed at times, and animations on all the robot characters are meticulous and smooth. The story is mostly told through portraits and dialogue boxes, but you will occasionally get a slightly more animated cut-scene between certain levels. The narrative is cute, a sort of robot romance that riffs a little on Wall-E, with its own odd twist. The story itself is nothing special, but the characters are endearing and things come together as well as they need to. The music is good, but it could use a bit more variety. Unfortunately, there are no Game Center leaderboards or achievements, which is a shame, because I could see both working out well.

I think CLARC is a terrific little game with a lot of heart. It’s gorgeous, meaty, packed with a variety of clever puzzles, and challenging. It’s a full, complete, high-quality game without a stitch of IAP to be found, save for the full game unlock in the lite version. I wish I could unilaterally recommend it to everyone. At the same time, even though I think CLARC pushes its core concept respectably far, I have to concede that it’s still primarily a game about moving around blocks, and a lot of people are pretty sick of that idea. So, I’m simply going to add the proviso that if you absolutely never want to see a block puzzle again in your life, you probably won’t be too thrilled here. The rest of you should check this game out. With a lite version there to give you a taste, it won’t even cost you anything.