Heart surgery, eye transplants, and dentistry. If this sounds like a horror movie, then you’re not far off. Except this time you’re the one in control, and all your patients are called Bob. No, you’re not dreaming, this is Bossa Studio’s Surgeon Simulator ($4.99), which has been remodelled and released for the iPad, and if you’ve ever fancied yourself as a bit of a surgeon, well now here’s your chance.

Bringing hilariously dark humor to the operating table once more, Bossa Studios have worked hard to make this game even more horrifying with the addition of some exceptionally disturbing procedures, perhaps ones that you wouldn’t even wish on your worst enemy.

The new touch control system is what makes this game even more so of a challenge than its predecessor, as this time you’re working with just the one hand. Working with one finger to drag around your instruments and objects and the other finger to aim and lock on to a rib or other connective body tissue, you’ll need the most deft precision in order to avoid botching your operational endeavors. The squishes and squelches make everything sound ten times more realistic, so if you’re highly squeamish and run away at the sight of blood, then you’re probably gonna wanna play something a little less lurid and a little more low-key. 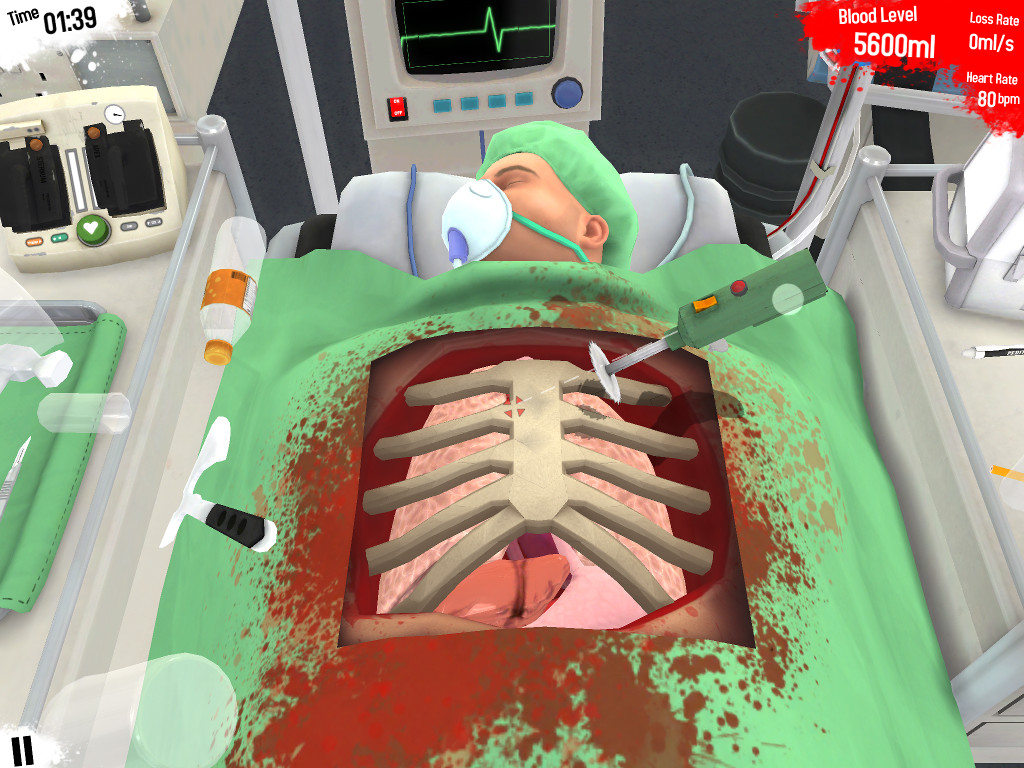 My first, second, and third attempts were horrifyingly terrible. Too much blood loss, and somehow I managed to trap the hammer under the ribcage. Don’t worry, this is all part of the process, and a steep learning process it is. This is all part of the wickedly comical humor that Surgeon Simulator has to offer, and the fun doesn’t stop there. A lot of the amusement also comes from the slapstick physics engine that means you can cause much havoc by “accidently” knocking around glass jugs, pencils, digital alarm clocks and more. Not to mention if you lose the instrument you’re supposed to be working with, you’re pretty much screwed if you can’t find some alternative. No scalpel? Oh, it’s okay, we’ll just try this pair of scissors instead.

Though the instructions for each process are unmistakably straightforward, the same cannot be said for when you accidentally strike an organ causing poor Bob to bleed out, as precision is everything in this game. You’ll clumsily flail your way around the table, grabbing the blue injection instead of the green colored one, and watch in dismay as the blood flow loss instantly increases. (Yes, this happened, sadly more than once). Then it’s back to the grind as you finally locate the correct injection, before slicing and dicing your way through to the meaty organs, just in time to replace the malfunctioning organ with a brand new one. It’s a huge novelty, for both the player and their audience. You can’t see this stuff happen anywhere else.

Disappointingly, it’s not as fun as its predecessor thanks in part to the dreadfully clunky controls that change the way the game presents itself. I found myself missing the appeal of trashing around whilst manually operating each finger on the hand like a carnival crane-gabbing-machine of sorts. This is what made Surgeon Simulator originally so off-the-wall, and although it still holds this title in some way, it certainly doesn’t have the same quirkiness as it does on the PC.

You’ll probably love this though, especially if you see yourself enjoying a portable game of Operation, and although it’s not something I’d play repeatedly myself, it’s great for a touch of comic relief.