Some people can’t get enough of endless runners. The concept of chasing a carrot on a stick and collecting tons of miniature carrots along the way has its own allure, but there’s no denying that the same concept is often used over and over to the point of boredom. Smash Hit (Free) turns the runner concept on its head with a first-person perspective, beautiful graphics centered around objects made of glass, and a completely fair free-to-play system that actually works. You could say it’s a… smash hit.

The game’s core concept merely takes a few moments to grasp — you’re barreling down a long series of tunnels, and your only method of attack is to touch a certain area of the screen to throw a marble. If you hit certain objects you’ll earn three more marbles for your total marble count, which also functions as your life meter. If you get hit by any hazard you’ll lose 10 life, and no marbles means game over. Got it? Good. 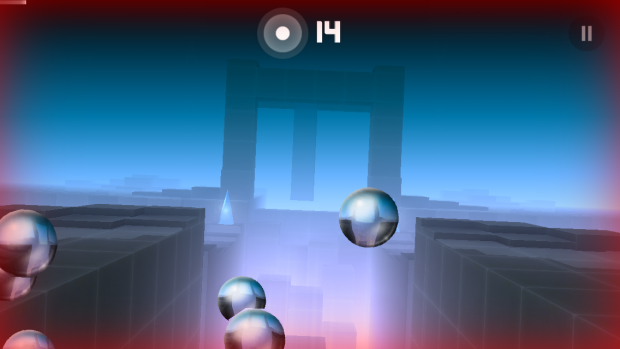 Where Smash Hit succeeds is the fact that it takes this simple, yet effective control scheme and delivers an enchanting world that you’ll actually want to run through. All you need to do is tap a certain area to “arc" a marble toss, and you’ll be able to pick up the game’s physics system in no time. Different segments constantly mix up your expectations, as DNA-styled glass obstacles, glass doors, and moving objects dot the landscape, seeking to drop your life count.

Almost everything can be destroyed, but you don’t necessarily want to throw all your marbles out willy-nilly, as you’ll need to conserve them to survive. This creates an interesting mechanic where you only throw out projectiles when you really need to, and seek to grab as many marble granting power-ups as you can. There’s a small concession in the form of an unlimited bullet power every so often, but for the most part you’ll need to rely on your wits and be sparing with your tosses.

Smash Hit really goes above the beyond the call of duty with an impressive visual style, which looks like it takes place straight out of a mythical land not unlike Dorothy’s Oz. With crystalline structures, glass floors and endless chasms, you’ll feel like you’ve been whisked away to another realm as you throw your marbles around, and it really feels quite impressive. I would love to see a sequel from the same team, much less another game that takes place in this same setting.

The game is free-to-play, but thankfully it employs a fair pricing method. Simply put, as long as you’re willing to do it in one life, you can go from start to finish without paying a dime. Should you decide to spring $1.99 for the premium version, you’ll net the ability to utilize cloud saves, and the power to use checkpoints. The latter is really where the bulk of your purchase is at, since it allows people to eventually “beat" the game without having to start at the very beginning. There are no IAPs and no devious purchases to worry about here.

I came into Smash Hit expecting a standard runner, but I came away extremely impressed, to the point where I picked up the premium version just to support it. If you’re looking for a new experience with a whimsical, well designed world, give it a try.