Bringing the feel of Super Smash Bros. to the mobile platform is a tall order, but APPSolute Games is attempted to do just that with Fright Fight (Free). The game is free, and its IAP structure is introduced to you immediately after booting it up. Put simply, you’ll be able to choose “buy" your first character for free (either a Grim Reaper, Yeti, Werewolf or Vampire), while the others remain as paid add-ons.

At the time of this writing an update has been added to the game that reduces the price of other characters (and adds an offline training mode), but they’re still a little to steep considering that you’ll be playing as the same initial fighter for a while. When you do actually end up unlocking more characters though, it’s disappointing to deal with the limited roster of four total fighters, which is exacerbated by the fact that you’ll sometimes play matches with everyone as the same character. It doesn’t help that the “coin" system also encourages you to purchase boosts to reduce the statistical cooldown timers, which increase in length the more you play. It’s not quite as limiting as a real energy mechanic, but it still feels like a nuisance at times.

Combat is actually a pretty simple affair, as all matches consist entirely of “point" based brawls. If you defeat an opponent or knock them out of the arena, you’ll earn a point — upon death, you’ll lose one. Like Smash Bros. it’s tough to really hone in one just one person, as you’ll have three opponents trying to kill you at all times. It all plays into the chaotic nature of arena fighters, which Fright Fight replicates with competence.

I’m actually really impressed by the controls, which maintain an air of simplicity without a need for clunky on-screen virtual pads. If you want to move left or right — just touch the area on the left side of the screen. If you want to dash, swipe left or right — likewise, swiping up or down jumps and ducks respectively. Light jabs are done by tapping the right side, and holding for strong attacks. That’s really it, and it works extremely well.

I had very little issues getting my character to do what I wanted, barring the occasional input lag when playing online. As you start to land attacks a “rage" meter rises, allowing you to do an attack that’s unique to each fighter. It doesn’t necessarily make them stand out from one another, but the simplicity of the controls makes up for it. It all works, and I had a ton of fun playing match after match online. 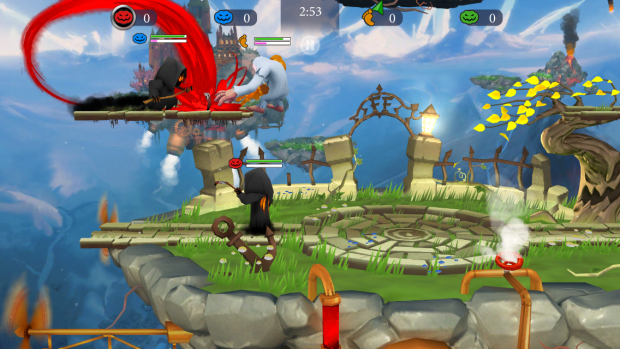 Just like the roster the level selection is pretty bare-bones (mostly consistently of slightly different layouts), but they similarly get the job done — even if the idyllic hills setting isn’t exactly “frightening."  It would be nice if there were dynamic levels and more power-ups beyond a generic “stat-booster," but thankfully the game is balanced enough without them in play. I was able to consistently get into four player matches, which is pretty much required to really enjoy the game to its fullest. Lag does rear its head on occasion, which severely impacts your ability to enjoy a match, but it’s not so frequent that it happens every match.

Considering the fact that the online arena space on mobile devices is limited, Fright Fight is a noble inaugural effort for the studio, and delivers a decent fighting game with an agreeable price of entry. I just wish a little more polish went into it, there were more fighters to choose from, and it was a premium title with everything included.