In a throwback to the days before fictional whiny teenage boys who sparkle in the sun, cute, quirky, stealth action game Midnight Bite ($0.99) manages to recapture the essence of the cool, caped retro style bloodsucker and replenish the hunger of the vampire-loving public.

In Midnight Bite, you play as Draku, a little vampire dude with a big appetite. Unfortunately for our little guy though, he’s got a few obstacles to overcome before he can grab his lunch and get the hell out of dodge. Working from a top-down perspective, whilst sneaking around and sucking the blood of old defenseless people and hapless villagers, you also have to evade the sight-line of the suspicious wandering guards, before feeding on your prey and escaping through a magical mirror that will transport you on to the next level. But that’s not all. Alongside quenching your inane thirst for poor defenseless folk, there are a number of coins scattered across the level which can be collected in order to bump up your final three star medal rating. Not only that, but any medals accumulated throughout the game as you advance can then also be used as a currency to unlock subsequent levels.

Highly reminiscent of the stealth component of acclaimed game Metal Gear Solid, the guards in this game have the largely familiar vision cone which allows you to determine the timing of every move you make. Hiding locations are dotted around the level in the form of crates and barrels which apparently mean you’re “out of sight, out of mind,” and allow you to move swiftly through areas overrun with enemies. Furthermore, if you keep a close eye on your enemies, you can track their movements as they walk around, thanks to a dotted trail to highlight their every step. 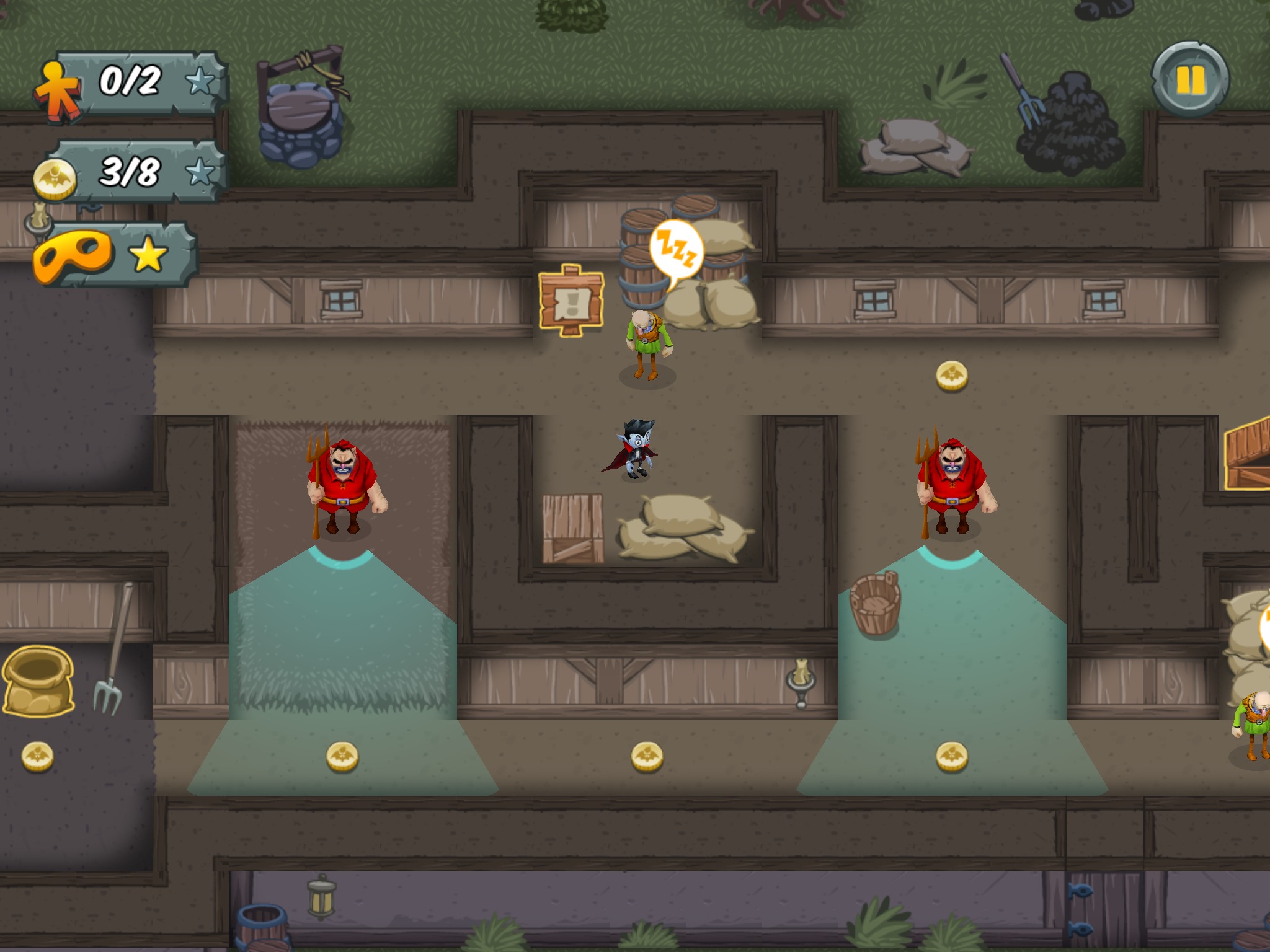 Various levels will give you the benefit of the doubt, by allowing you to use items to stun your enemies into a stupor for short periods of time in order for you to sneak past. Though this all sounds like a walk in the park, it soon becomes apparent that the first few levels or so are just the appetiser, and things are about to get much tougher, with the introduction of further variables to keep Draku on his toes. Easily-disturbed cats will shriek loudly if they spot you, drawing in any guards who happen to be nearby. Garlic and Bibles will slow you down further. As you advance throughout each level, the number of guards and potential enemies increases tenfold and beating each level becomes even more of a challenge.

Unfortunately, the one aspect that lets Midnight Bite down in a huge way is the cumbersome controls that are awkward and clunky. It should be fairly straightforward considering that it’s the basic system of tapping and dragging to move around and tapping once to execute an action. However, I found manoeuvring my character around highly frustrating for the most part, as a lot of the time he would either fail to respond quick enough at a necessary point in time, or would decide to do the opposite of what I was asking him to. Because of this, I felt I failed a lot more times than I would have expected to, which is a shame as the game itself is equal parts remarkably cute and highly entertaining.

Midnight Bite is a nourishing snack for those who are looking for something entertaining, yet wholly challenging. For those who can put up with slightly burdensome controls, if you like vampires, and you’re a fan of stealth action games, this will most definitely satisfy your hunger.