What if Bill & Ted’s Excellent Adventure and the arcade classic Gauntlet were mixed together into one zombie slaying romp? The concept alone would probably win over a decent amount of fans hungry for another old school hack and slash, but fortunately, Second Chance Heroes ($0.99) does a whole lot of things right to help move it out of a niche category and more into the forefront. Most notably, it’s free-to-play — the good kind.

Although it doesn’t go to great lengths to explain how it’s possible, Second Chance Heroes brings back various heroes and leaders from history to do battle with an impending zombie invasion. I’m sure you’ve heard of Blackbeard, Cleopatra, Abraham Lincoln, and Leonardo da Vinci before, among many other prominent members of the cast. These aren’t just boring carbon copies of people from history though, as Second Chance Heroes does a great job of making their own signature mark on each character (the short Napoleon riding a cannon is probably the funniest showing). 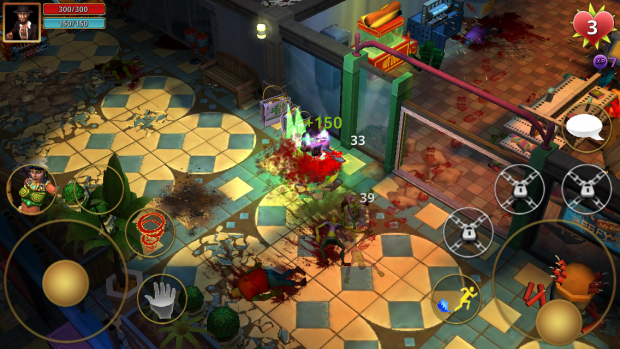 The exaggerations usually involve ridiculous proportions for characters like Lincoln, or the ability to wield magical spells for Cleopatra. The differences between the historic figures is staggering, as practically all of them play completely different from one another. For instance, Lincoln will hack with his chainsaw, Cleopatra will shoot projectiles and fly around the board, and Leonardo da Vinci will sport advanced weaponry in a mech-suit. It’s ridiculous, but fitting — especially given the genre.

The visuals are about on par with a downloadable console game, which is impressive. Environments are sufficiently full of details, from fallen rubble to broken vending machines, and a meticulous amount of care was put into just about every facet of the graphical presentation. The detail extends to practically every enemy model in the game, as well as weapons, weapon effects, and the characters themselves. This could easily be ported to the PC or any number of consoles in a heartbeat.

Zombies aren’t the only enemy in Second Chance Heroes either, as ghosts, mummies, and aliens also make an appearance. It helps keep things interesting and varied, so you’re not fighting the same foe over and over. Most of them operate as cannon fodder to be clear, but the designs themselves are fun to look at, so long as you can stomach constant slashing. 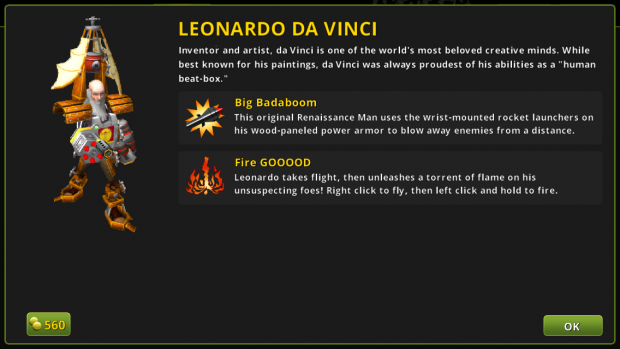 Control-wise, Second Chance Heroes definitely could have fallen apart at the seams given the large amount of on-screen buttons, but surprisingly it works better than it looks. It follows a simple virtual “twin thumbstick" principle, with movement on the left and aiming on the right. From there, you can flick your thumbs out to any one of the buttons on the side of each stick to use things like super moves, items, the dash ability, and interact with objects.

There generally aren’t a whole lot of complicated puzzles or tactics involved outside of “kill everything in sight," so it works out. If I feel overwhelmed I can either dash out of a corner or spring my super attack, which gives me a decent amount of options to deal with any given problem, and alleviates some of the control concerns. Although it occasionally acts up due to the nature of cramming so many buttons into a small area (especially on phones), it works well enough for an arcade game.

If you’re up for it, you can have at the game’s nightmare-filled stages alone, or with up to two co-op partners online, which is a nice touch. Partners will all earn rewards together, and there’s no real downside to playing with others — especially since the difficulty isn’t bumped in any noticeable manner. I did experience some lag every now and then, but it was playable, and a blast. In general, it’s a ton of fun to just join in on a random game and rip some enemies up without any sort of communication needed.

So how does the IAP work? Well, you’re granted access to Abraham Lincoln and Cleopatra right out of the gate. From there, you can either buy gold or earn it in-game by completed stages to earn more characters and upgrades. While some of the characters are a bit expensive, from my experience I could buy at least one character every two to three level runs. Considering you can beat the game entirely with the two free ones though, it never feels like the developer is withholding content. It’s an extremely fair system, and I’m wondering how it’ll work out in the long term.

If you’ve been itching to just kick back and rip apart some zombies, Second Chance Heroes is a great place to start. It doesn’t hurt that it’s free in its current incarnation, with online play, a decent amount of characters, and that it sports a stunning engine. Although it could use some small tweaks like controller support and better online play, games like these don’t come around very often.