Where would you go if you were a green mule out in the Wild Wild West? Well that’s what Mr. Rooney has to figure out, in a game full of the most offbeat puns and unconventional puzzles. Glitch Games, the very same developers of the dark and macabre Forever Lost, have done a complete 180 with intriguing iOS point-and-click style adventure Ferris Mueller’s Day Off (Free). Based very loosely on the renowned film of similar namesake, this curious game, which is clearly about a mule and not a young teenager on the brink of adulthood, invites you into a bright, colorful world where mules have humanity and the fellow town residents are largely unaccommodating.

Playing in the shoes of Mr. Rooney, you’re tasked with the pursuit and retrieval of Ferris the mischievous green mule, who has decided it’s in his best interests to take a day off from his usual mule duties. In some kind of bizarre scavenger hunt, you’re tasked with the quest to find nine golden carrots, all whilst solving a procession of wacky puzzles. Along the way, you’ll meet a zany bunch of crafty individuals, who seem to only be happy to reveal details of the mule’s whereabouts when you’ve likewise offered them something they require. 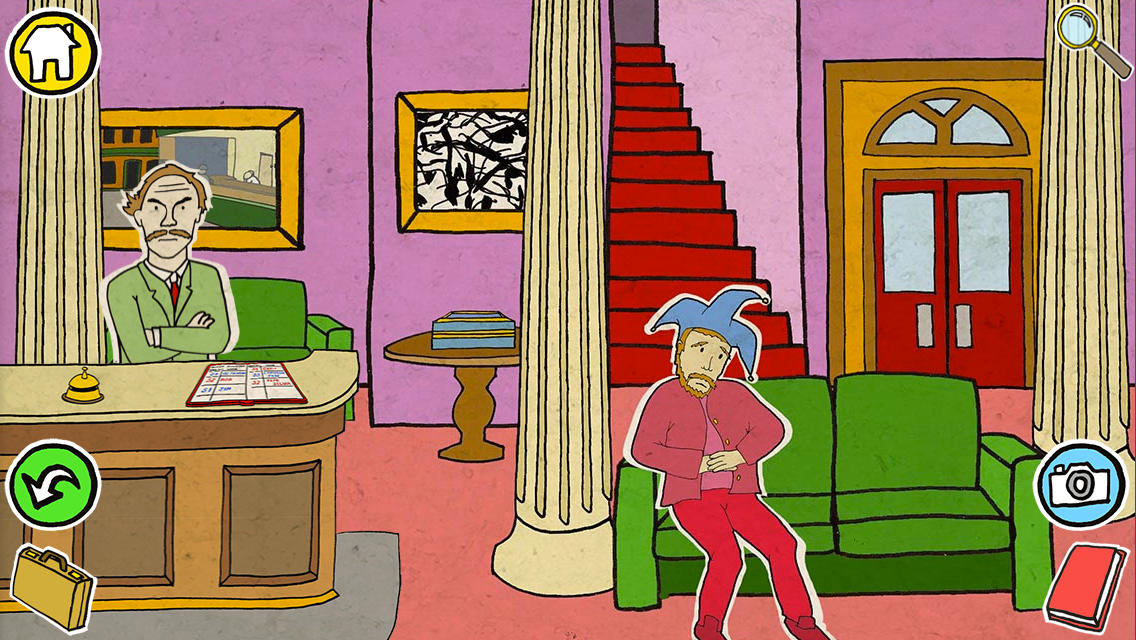 What impressed me about Ferris Mueller is its strange but interesting approach to its puzzles. Although the game offers a handy hint system, it still involves a fair amount of decrypting and unravelling, especially considering there’s usually a link to figure out between the clues and the solutions in some way or another. In one example, I had to work out how the colors of a rainbow related to some rather crude human sounds in order to tap out the most ludicrous tune on a piano. Sound bonkers? That’s because it really is.

All around the town, there will be various clues either written on scraps of paper, hidden in paintings or graffitied on walls. Sometimes they will be self-explanatory as you meander your way around, and other times it will be a case of figuring out which clues relate to which puzzles. Luckily, the walkthrough-style hint system (accessed by tapping the microscope at the top right of the screen) is there to free up your frustrations a little should you get hopelessly stuck, as it will usually explain where most of the clues are found and the next steps to take to solve the puzzle. Despite this, there’s still a great deal of satisfaction and accomplishment when you get your hands on that golden carrot after unlocking another cryptic riddle. 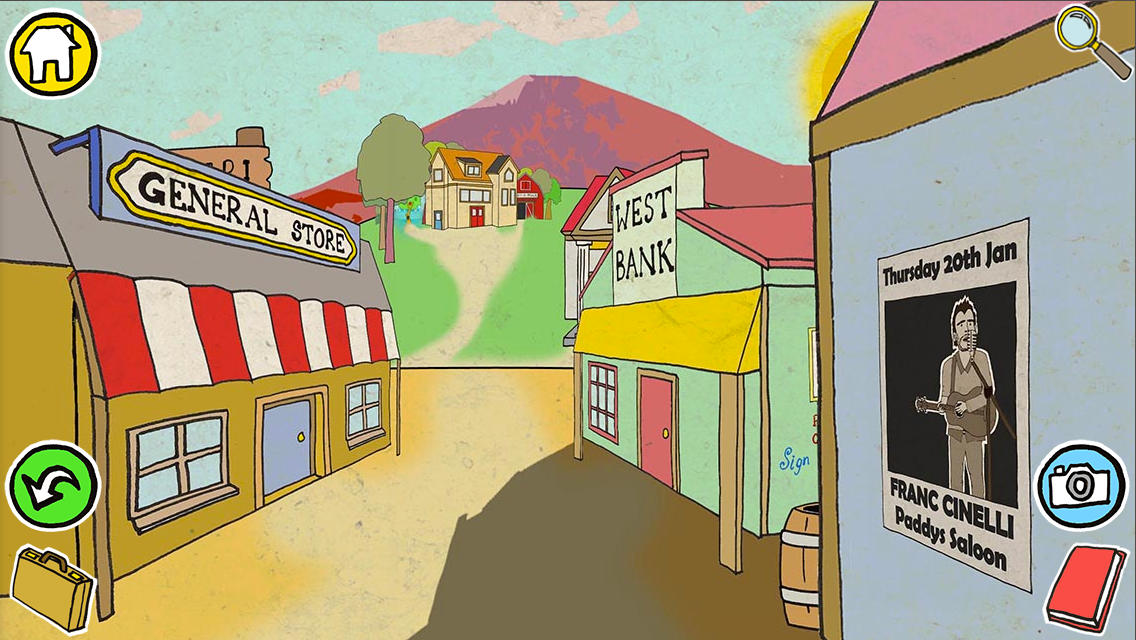 Since the game takes an open-world approach, it’s down to you, the player, to tackle each of the puzzles in any order desired. Because of this, it never gets dull and its non-linear approach keeps gameplay altogether refreshing. One of the perks is the handy in-game camera, which allows you to snap photos of everything and anything throughout the game. In a similar fashion to the traditional in-game notebook, you can instead use this mod-con to take snapshots of every clue you come across and access it when you need to cross-reference anything.

Though I had a lot of fun interacting with the various oddball characters and managing to coax them from their possessions, the jokes in the game try a little too hard in places. Though I might have let slip the occasional snicker here and there, it just was a bit too peculiar in places and a lot of the time left me trying to truly comprehend the why’s and wherefore’s of the game.

There are some small references in part to other classic 80s films including fan favorite The Breakfast Club, but it’s more a case of blink and you’ll miss them. They don’t really speak out for the movies in general, other than to note their obvious presence, and at one point there’s even a Breaking Bad reference which seems so ludicrously out of place it made no sense whatsoever. I like Walter White, but really?

Though I truly enjoyed the brainteasers and the puzzles are well-designed, Ferris Mueller’s Day Off is a bit of a tough one to wholly recommend. If you feel the need to enjoy a short open-world adventure, you may well find it entertaining enough to keep you hooked to the very end, but its unsightly graphics and strange comedic attempts are altogether off-putting for the most part.