What do you suppose ran through the mind of your nameless, faceless, Indiana Jones-wannabe adventurer when he desecrated an ancient Egyptian temple and awoke hundreds of bloodthirsty mummies from their eternal slumber? “I should have parked closer to the temple" would be my guess. His predicament is our gain, as Escape from Doom (Free) is a rollicking good time.

Escape from Doom takes after Into the Dead (Free) and other first-person endless runners. You swipe or tilt your mobile device of choice to veer around enemies, plunging ever onward into sandstorms, temples, and straightaways clogged with the dead. Scattered among them are vases, and crashing into them rewards you with a bundle of gems or a key, which unlocks treasure chests containing random weapons drawn from your arsenal of available slaying implements.

The weapon you receive plays into your odds of survival. Most zombies take several shots with the revolver to go down, while the crossbow skewers a line of three or four–provided you’re brave enough to wait to the last possible moment to pull the trigger. 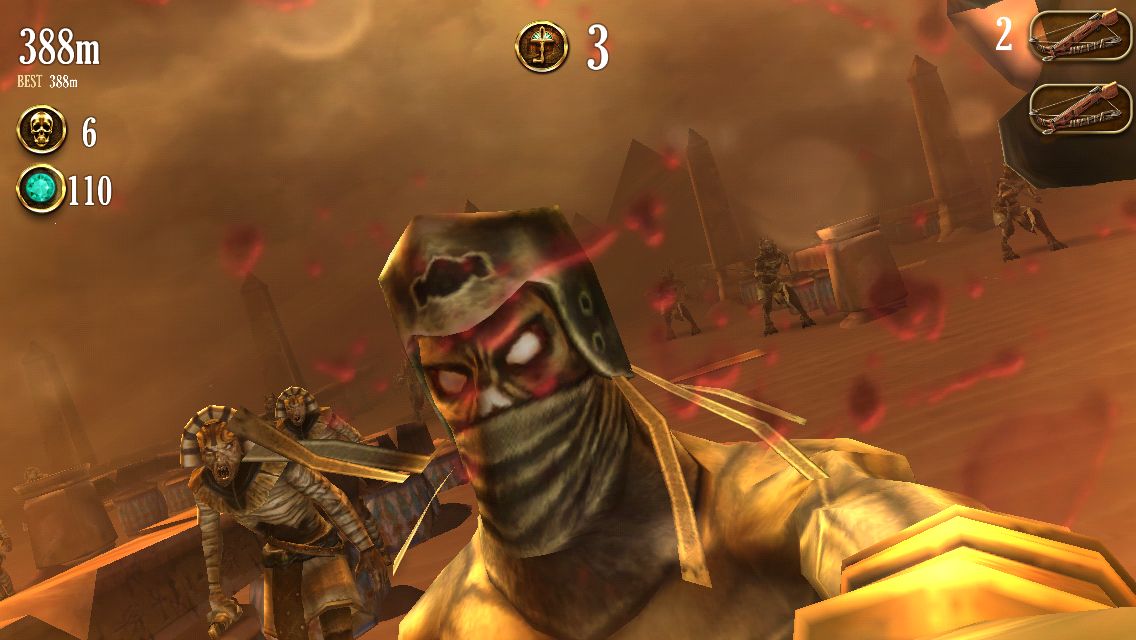 And that’s the trick. Running directly into the bandaged arms of a rotting pharaoh is a one-way ticket to the game-over screen, but treasure is scarce and ammo is scarcer, so you constantly need to choose between opening fire or swerving to one side and hoping they only graze you. Glancing blows shake loose a few of the precious stones you’ve picked up; on the bright side, you live to plunder another vase.

Escape from Doom is all about choices. Agonizing over when and where to use that last crossbow bolt or burst of machine-gun fire, and whether to use your last key to grab a weapon or put your faith in luck and reaction time, and which upgrades to bring along and which to leave behind, weight every run with tension. In many instances, the dead will be too thick for you to risk easing your way over to a vase or chest, leaving you armed with only your reflexes and derring-do for the duration of a run.

The emphasis on decision-making carries over to every facet of the game. Leveling earns you free weapons and upgrades such as a holster to carry an extra weapon. You level by completing goals, most of which are cumulative, so you can chip away at some or shift your attention to others that must be completed in a single run. If you get stuck or impatient, you can always pay your way forward by trading gems for keys, passing grades on goals, and weapons and perks, making the game as accessible to casual gamers as it is those who prefer to muscle their way to each level-up.

As much as I enjoyed the thrill of fighting and clawing my way to new upgrades, boredom crept in. Escape from Doom‘s landscapes go from beautiful to dull once you’ve seen your 33rd stretch of sandy desert, sandy tombs, and sandy sandstorms. I also experienced some frustration when I opened fire close enough to an undead to smell its rancid breath, only for my bullet to occasionally and inexplicably miss its mark.

Those shortcomings shouldn’t dissuade you from putting on your running shoes and heading off for a little plundering. Escape from Doom has enough depth to keep you raiding tombs for hours, even though you might not want to log those hours all at once.