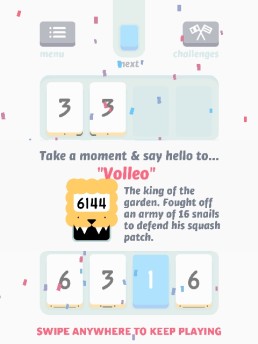 If you’re not playing Threes! ($5.99) yet, that’s a problem you need to fix right now. We loved it in our review, and we’ve already posted a guide explaining the scoring and strategy of the game. Well, TouchArcade forum member y2kmp3 unlocked the 6144 “Volleo" card this Friday, which is a TouchArcade community first, if not a world first, and getting that deep into the game. So, how’d she do it?

Well, y2kmp3 starts out by saying getting this far into the game took her anywhere between 10 and 15 hours over a number of different play sessions with most of that time going into planning moves. Considering the game “beaten" by finally reaching the 6144 card, y2kmp3 has officially retired from Threes!, even though she hasn’t actually hit the game over screen yet. Here’s some tips on how to get that far, straight from the person who did it:

2. The most difficult part of the game is to learn how to get out of a potential jam, the most dangerous of which is “staggering". This occurs when a “low number" tile card appears between two very “high number" tile cards. It is very important to remove staggering as early as possible (without replacing it with another staggering).

4. While the game undoubtedly requires skills to win, the “element" of chance plays a significant role in this game. In fact, I would argue that chance dominates over skills in the later levels. I found it simply too difficult to maintain two separate chains to create two identical “high number" card tiles to merge. Instead, my strategy is to create only one “high number" tile card of each kind, so that whatever the random “high number" tile card appears, you can make use of it to escalate.

5. The game is quite taxing to play at the later levels. Near the end, I was keeping count of the 1’s and 2’s that were appearing and would frequently change my strategy when I could count on the fact that these tiles might not appear for awhile (assuming the stack theory is correct; see #6).

6. I, too, am convinced that there is some unknown stack from which the tile cards are drawn and this stack gets renewed and reshuffled.

7. I am fairly convinced that, given a number of open rows or columns where a new tile card can appear, their probabilities are NOT equal. More often than not, the new tile card would appear in a “less" favorable row or column instead of a “more" favorable row or column with which I could do an immediate match. I am fully aware of the potential issue of “recall" bias, so I welcome other players’ impression of this theory.

Additionally, if deconstruction and theorycrafting of Threes! is something you’re in to, TouchArcade forum member kamikaze28 is making ridiculous headway on figuring out the inner workings of the game. In fact, I’d say the whole Threes! thread is worth checking out, as the amount of strategy discussion and teamwork going on is easily making it one of the best threads on our forums.