It’s not often that a title will offer up an endearing setup that’s just as impressive as the gameplay, but that’s just what Rocket Robo ($1.99) does. As a tiny little robot in space whose sole purpose is to keep “the Tinker" company, it’s your job to recover all of the stars in the galaxy, and bring joy back to your maker. Thankfully, it plays as well, too.

I couldn’t help but think of the words “Pixar" and “Wall-E" while watching the opening video for Rocket Robo, and that’s easily a good thing. The relationship between the human tinker and Robo feels real, despite the fact that the opening is only a few minutes long. You’ll play as the titular robot, who has a rocket boost ability at his disposal, and is tasked with collecting as many stars as he can in a level. In that sense it’s very similar to all of the level based puzzle games you’ve played before on the mobile platform, but thankfully, it plays like a dream.

To facilitate your star collecting, the controls are incredibly simple to pickup — you just touch the screen to engage your rockets, and tilt to move. I’m pleased to report that pretty much everything is spot-on movement-wise, as the motion controls aren’t too loose or tight. Boosting with your rockets is equally as smooth, as you don’t shoot up so fast that you fly into the great unknown. It helps, because there’s tons of traps to accidentally fly into, prompting a quick stage reset. 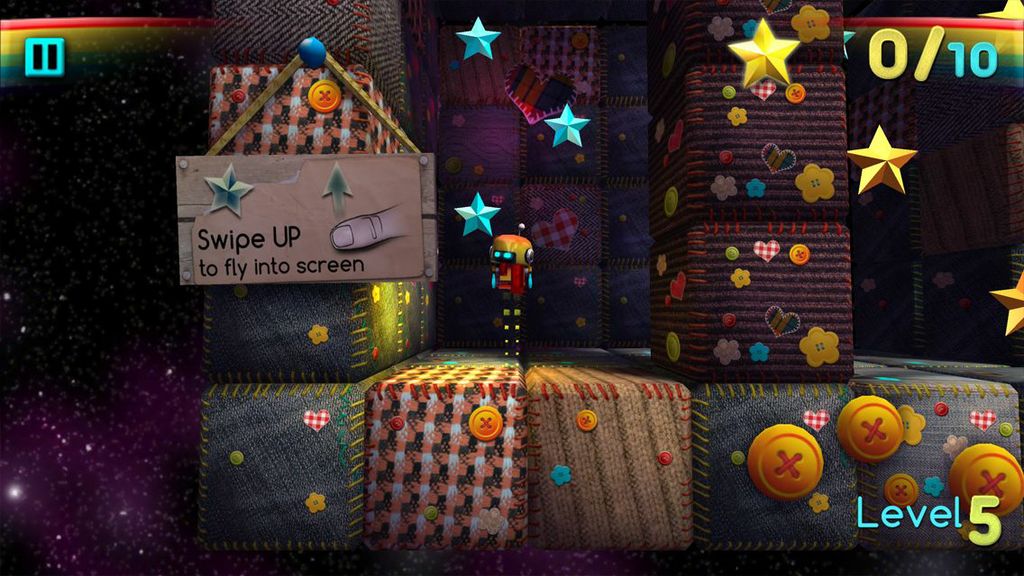 Once you start to get the hang of things, Rocket Robo will gracefully introduce the “swipe" mechanic, which allows you to move to and fro from the background to the foreground at will (if there’s room). It’s here that the game shows its true colors, as you have to find hidden stars within pretty much every nook and cranny of a stage. It’s a very subtle cue, but every time you switch planes a different sound plays for each side. It’s a brilliant design decision, and keeps things less confusing as you start to acclimate to switching. Each plane also has a different color star to really drive the point home and ensure a lack of confusion.

With the background switching, the presentation, and even the aesthetics, it’s easy to draw a comparison to LittleBigPlanet, which is a compliment in this case. Everything looks so whimsical and inviting, to the point where you’ll get hooked into the game’s world fairly quickly, and want to see the adventure through until the end. It also sports a sufficient physics engine, and objects don’t feel clunky or awkward. The worlds have a lot of care put into them, and every hidden location that houses stars feels carefully crafted. There’s a level of dedication here that really isn’t matched in a lot of mobile games, and it’s really easy to notice.

If the game consisted entirely as a giant scavenger hunt it wouldn’t be nearly as inviting, but there are hazards afoot like enemies that cling to walls, buzzsaws, and moving objects to avoid. It helps add a more action-like element to Rocket Robo, which of course makes things more interesting. There are also no IAPs to worry about, as all of the content is on offer in the game itself, with other worlds promised in a future update.

Rocket Robo is worth picking up for its presentation alone. The design is stellar, to the point where I could easily see figures of Robo selling at a local store. But it’s more than just a pretty picture, as it’s complimented by tight controls and engaging gameplay.