Seeing the Irem logo come up when starting a game still makes me a little sad. We’ve seen a lot of important game companies go softly into the night, but somehow, seeing Irem give up game development to focus on pachinko machines hurts a little bit more than the usual. At the time they made the decision, it stung all the more because it resulted in virtually all of their games being pulled from digital services, including the original R-Type, one of the true classics of its genre. As a bit of a silver lining, though, Irem seems to be agreeable about licensing their older games out, and R-Type has slowly been making a return. Last summer saw DotEmu’s enhanced re-release of R-Type ($1.99) for iOS, which offered the original game with a few new options. It’s a great version of a game that’s been ported to just about every piece of hardware imaginable, as long as you can’t imagine an NES.

It’s funny, but for how many times R-Type has been ported around, the sequel has rarely been ported in any form, let alone a properly intact version. Unless I miss my guess, the only non-compromised ports are the Amiga and PlayStation versions. Well, once again, DotEmu comes to the rescue with their release of R-Type II ($1.99) on iOS, an excellent emulation of the original arcade classic with all of the bells and whistles seen in their release of the first game. It contains all six of the stages from the original arcade game, with every effect intact. It all has every bit of challenge the arcade game did, easily surpassing its predecessor in difficulty. Make no bones about it, you’re going to need either great skill or great tenacity to see your way to the end of this game, even on the new easier difficulty setting. I wouldn’t have it any other way. 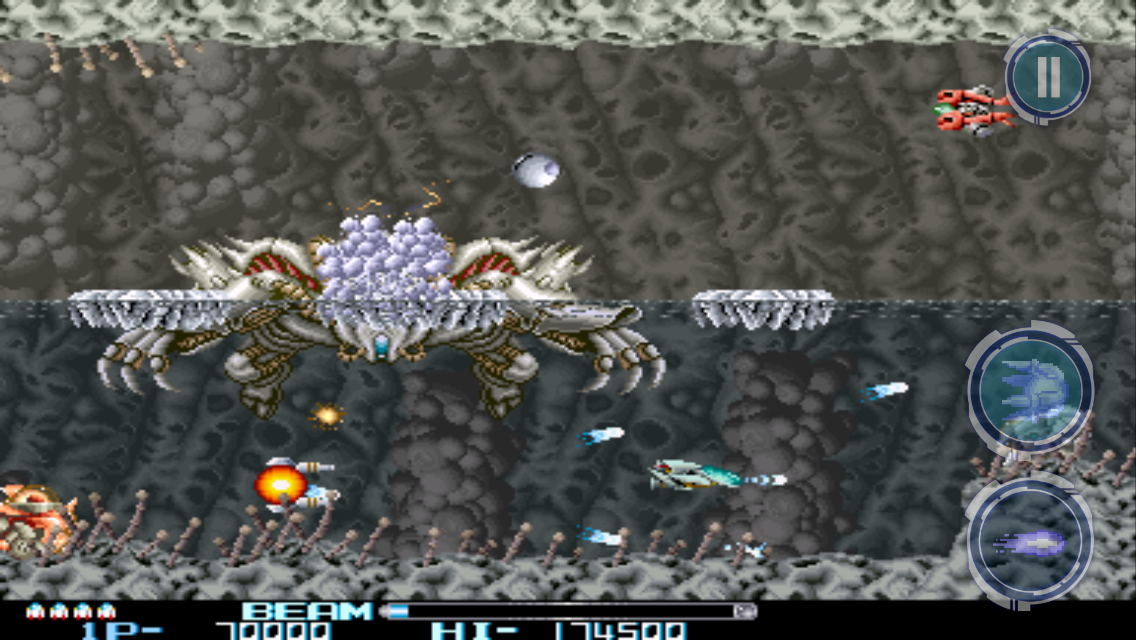 As a genre, shoot-em-ups are fairly well-known for being tough, and R-Type II is certainly in the upper ranks as far as that aspect goes. Like the original game, it has a bit slower pace than most shooters, and there’s very little random about it. Even with these two things going supposedly in your favor, it’s not at all uncommon for the game to completely overwhelm you with attacks from every angle. Survival is completely contingent on how well you master the Force power-up, which is probably the defining element of the R-Type series. Collecting this power-up gives you an invincible pod that can attach to the front or back of your ship, blocking enemy shots and adding to your firepower. If you like, you can also press a button to launch your Force pod away from you, enabling you to hit enemies that might otherwise be out of your reach. You have to make proper use of this special ability if you plan on getting even halfway through the game.

Of course, that’s not the only power-up you can get. Lasers come in five different types, with two of them new to this installment. You can also collect missile power-ups, including a new bomb-type missile, speed power-ups, and up to two Bit satellites that will block shots and increase the spread of your attack. Collecting multiple power-ups of a particular type will give you a more powerful shot of that type. This is all fairly boilerplate stuff for the genre, though it was slightly more original when the game originally released in 1989. Of course, if you die, you’ll return to the last checkpoint with your power-ups back to square one. At certain points in the latter half of the game, you might as well start over from the beginning if you die, unless you’re truly masochistic.

The levels have a different feel to them compared to the first game. Things are a lot less organic and natural, outside of the second stage’s cave. The more artificial and mechanical backdrops of the game give it a bit of a darker feel, with more browns and grays compared to the occasionally lush colors of the first game. R-Type isn’t shy about asking you to battle through narrow, deadly passages, and the sequel does little to change that. Also, that most famous of evil tricks from the vintage years of gaming can be found here. Clearing the game once will give you an ending screen, but if you want the true ending, you have to clear the game again with the difficulty cranked up a bit. I can grit my teeth long enough to make it to the first ending screen, but I can’t say I’ve ever actually made that true ending appear by my own hand, and I perhaps will go to my grave with that unchanged.

If I do, though, this version might be the one that I do it on. Just like the iOS port of the original game, there are three difficulty settings on offer here. There’s the normal difficulty mode, which mimics the arcade’s default challenge level, unlimited mode which gives you endless lives, and an unlockable insane mode, which is appropriately labeled, because you’d have to be nuts if you want R-Type II to be any harder. Even the unlimited mode still retains a very high level of difficulty, since you still have to start back at your last checkpoint without any power-ups if you die. Still, beats starting the game over. Another concession made is that once you’ve reached a level, you can start your game there again anytime. This progress is tracked separately for each of the difficulty settings, though, so don’t think you’re just going to waltz in on the last level of insane after playing through unlimited. 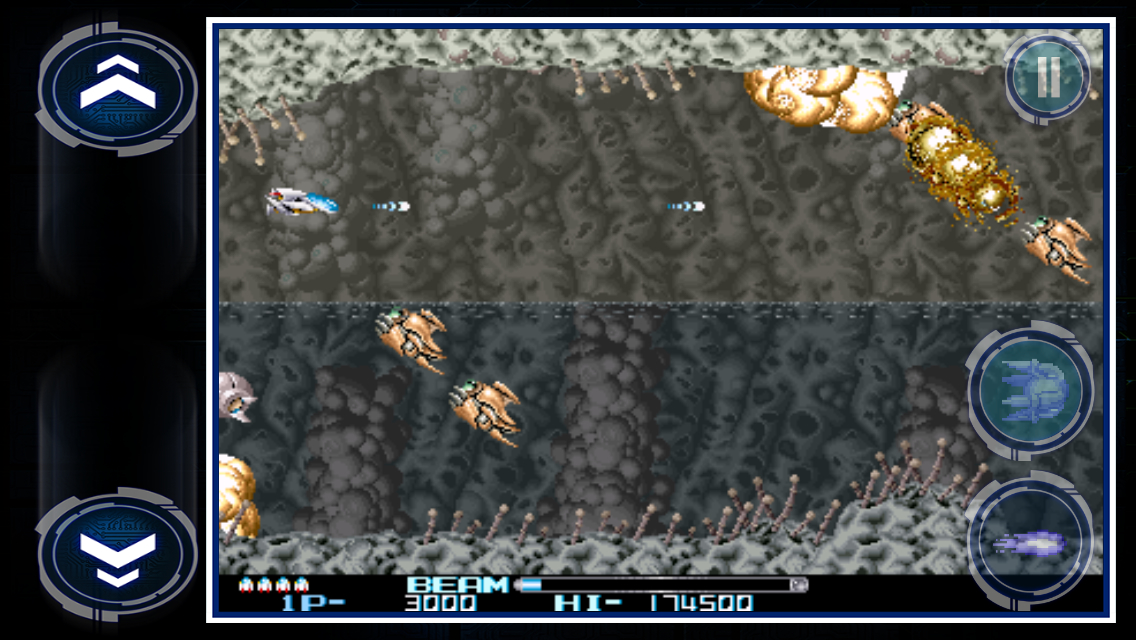 Everything that could be perfectly emulated is done so here and then some, but there is, of course, one thing that can’t be emulated: the controls. There are two different control options available to those without controllers. In either case, you’ll have two virtual buttons for charging your shot or launching your Force pod, but for ship movement you have your choice of a virtual directional pad or relative touch. Neither one is optimal, since they both require blocking the screen to some extent, a fatal proposition in a game like this. This can be mitigated to a great extent by switching to the original resolution in the video options, which doesn’t use the full screen and therefore leaves an empty area that can be used to control your ship. You can also use a controller if you have one, which completely wipes this issue out.

As you’d expect from DotEmu, there are options for filtering and scanlines in addition to the resolution, and Game Center has been implemented with support for leaderboards on normal and insane difficulty, along with a list of achievements, some of which may never be attained by a human being. No matter how you play, the game looks and sounds just like it did back in the arcades, which is to say, great. R-Type II is noticeably more beautiful than the first game, with deeper colors, more detail, and some interesting environmental effects. The synth soundtrack is still awesome to this day, perfectly capturing that 80s sci-fi sound. 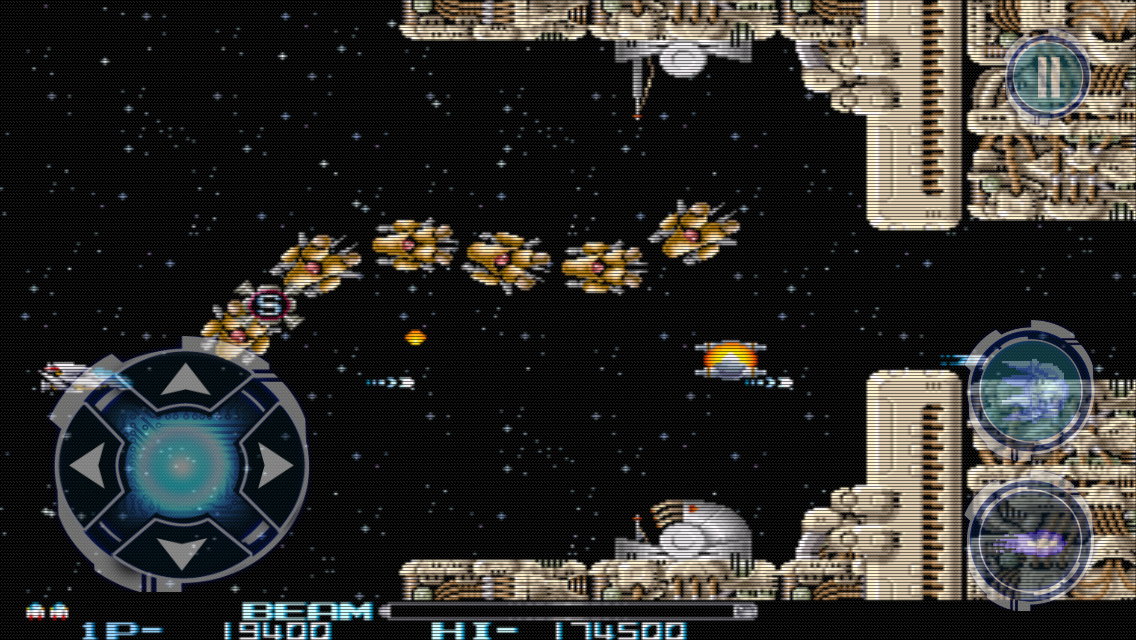 R-Type II falls just a bit short of the first game, in my opinion, but due to the relative scarcity of rereleases, it’s likely to be a slightly more fresh experience than the original game for many people. I’m not sure whether the step up in challenge is something people will like or not, but that should factor into whether or not you pick this game up. If you bought the first R-Type and couldn’t make much progress even on unlimited mode, you should probably steer clear of the sequel. If, however, you relish a serious challenge, R-Type II is going to suit you just fine. It’s not quite the experience the first game was, but it comes awfully close, and that’s enough to put it in the top tier of shoot-em-ups on the App Store.