In an age of horse armor and pay gates, the debate for and against monetization in games rages on. Jan Tomasik is a big fan of genres unique to the platform, namely endless runners, but not as keen on the over-monetization that too often favors money-making opportunities for the publisher at the expense of design and fun. Tomasik decided to team up with his girlfriend to create a game free of freemium trappings. That game is Cloudbreakers ($0.99), and it is an absolute blast.

Cloudbreakers is an endless runner that is neither endless nor involves any running. Your goal is to climb to the tippy top of a mountain made up of themed regions. You ascend by holding the game’s single virtual button to plant your climbing tool in the nearest ledge and swing around and around like a trapeze artist. When you’re lined up in the direction you want to go, release the button and your avatar goes flying. Press and hold the button again to stick your pickaxe in the nearest ledge and swing higher still. As you climb, a bank of clouds bubbles up from below. Tumble into the clouds and your climb ends.

Vaulting skyward is easy enough for players of all skill levels to get the hang of after just a few tries. The real lark lies in learning how to send your avatar precisely where you want to go: soaring up and over to a distant cluster of coins, or ricocheting off the cloud bumpers that run along both sides of the screen like a cue ball to snag a giant coin and barely latching onto the lowest ledge just visible over the rising clouds. After just a few minutes, I was swinging confidently up, down, and all around, and feeling like a gold-medal gymnast while doing it. 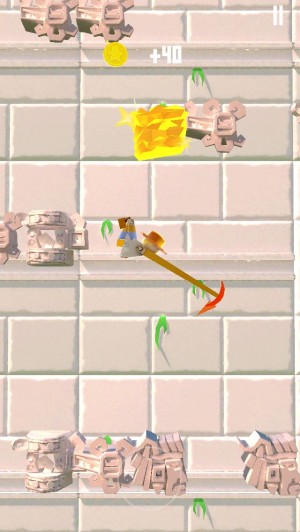 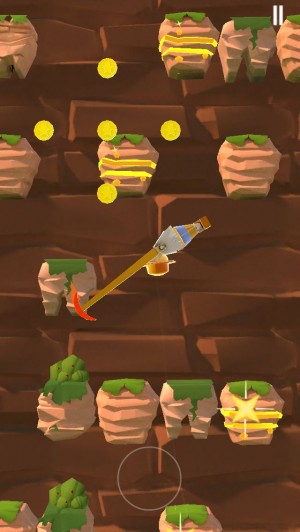 Just be sure to watch your finger placement. Most of my screw-ups occurred because my thumb slipped off the small virtual button, and you’ll need exact precision to survive each region’s numerous obstacles–waterfalls, blocks made of gold that reward you with extra cash by latching onto them but disintegrate after just a few swings, and ledges that blink in and out of existence. I’d also like to see a brief tutorial that explains how to swing around clockwise, an action I had no idea was possible until I consulted the forums (and which didn’t hamper my ability to reach any area I wanted or needed to reach).

Cloudbreakers fulfills its developer’s ambition to craft a game according to the classic what-you-see-is-what-you-get formula. There are no coin packs in Cloudbreakers. No fast unlocks. No advertisements. No notifications or social media integration. There are heroes to unlock, each with a special ability like an extra life or starting at a higher level on the mountainside, and you unlock them the old-fashioned way: by saving money you earn in-game, or by collecting wooden body parts that make up each hero’s doll-like figures. The placement of hero parts never changes, so you can plan ascents around gathering parts.

IAP has its place on the App Store, but Cloudbreakers is proof that you don’t have to pay (and pay, and pay, and pay) for a game to get the most out of it. Its easy-to-learn-but-difficult-to-master gameplay, beautiful graphics, challenging environments, and rich selection of ambient sounds have gelled together into one of the most enjoyable and pure gaming experiences I’ve had on a mobile device, one that all gamers will enjoy.