Tony Hawk’s Pro Skater, back on the original PlayStation, was something of a revelation for me as a gamer. See, up until that point, I generally avoided games whose themes I had little interest in. If I didn’t like watching or playing football, why would I like Madden? If I didn’t like 7up, surely Cool Spot would not appeal to me. So, having little interest in skateboarding, I paid little attention to THPS until a friend pretty much forced me to try it. It quickly became one of my favorite games, and I became an avid fan of the series until it tragically asphyxiated itself with a giant skateboard accessory. All that, without knowing anything about skateboarding other than that I was really lousy at it. After that, I started to be considerably more open-minded about what I played, and that’s never a bad thing.

The connection SuperPro Snowboarding (Free) has to Tony Hawk is, then, twofold for me. Like skateboarding, I have very little knowledge or interest in real snowboarding. I played Coolboarders and 1080 Snowboarding along with a couple of more forgettable games, but the fine sport of snowboarding is not typically my thing. Apart from that personal link, a lot of SuperPro Snowboarding is clearly informed by the Tony Hawk games, hitting many of the same great notes even while making a fairly major shift to a 2D plane. Making that move, it also hits me how much Tony Hawk was something of a 3D version of another old favorite classic of mine, DMA Design’s Uniracers for the SNES, because there are definite echoes of that fine game in here as well. 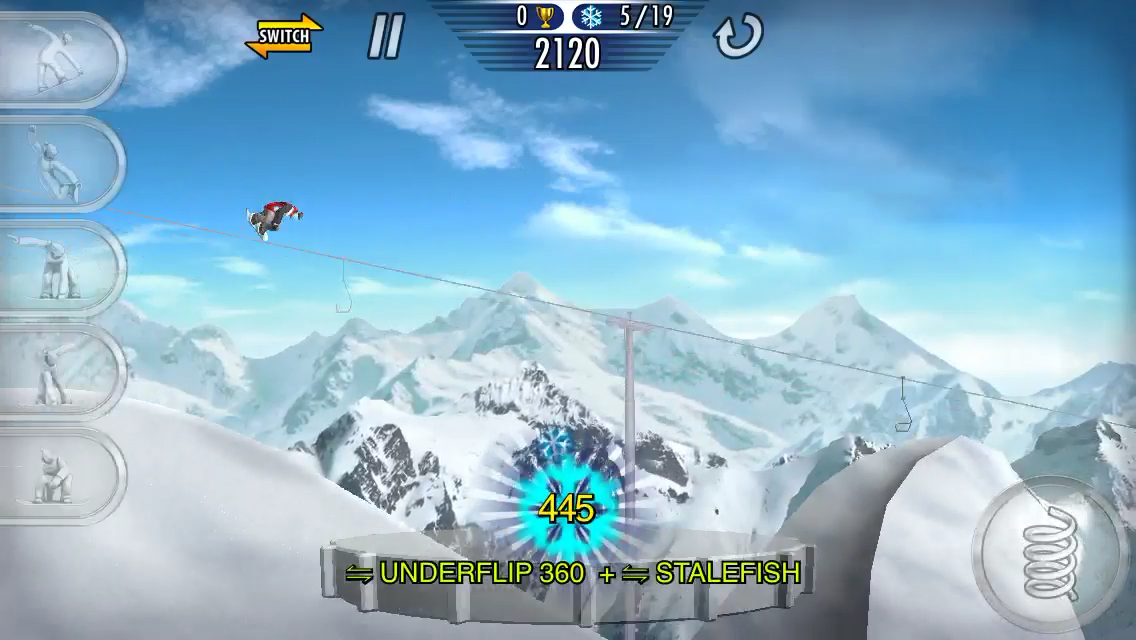 SuperPro Snowboarding is, at its core, a stage-based game where each stage has a set of goals to complete. Every stage features at least three main goals to work towards. Players need to try to achieve a target score, collect all the snowflakes scattered along the level, and try to make it from start to finish without crashing. You don’t have to clear these to move on to the next stage, but you’ll be rewarded if you do. Most of the stages have extra goals, asking you to perform a particular type of trick or enforcing a score threshold or no-crash rule. These goals are required to unlock the next level, so if nothing else, you have to focus on checking these off. There’s no time limit, but like the downhill segments of the original Tony Hawk games, you can’t really go backwards with any degree of success, so you only get one chance at each part of the stage per run.

After you clear a stage, you’ll earn coins based on your performance, along with experience points towards levels that more or less just give you the same coins. Using these coins, you can unlock a variety of tricks, upgrade your spinning and flipping abilities, and buy new boards and boarders. Provided you’re being thorough about finishing the stage goals, the coins flow pretty freely, allowing you to easily deck out your boarder by the end. You might have to save up for the extra boards and boarders, though, as they’re a little more expensive, though still very reasonable. As a bonus for people who actually are into snowboarding, this game is full of licenses for real snowboarding equipment and apparel companies, giving a nice extra touch of reality. The game offers IAP in the form of a currency doubler and coin packs, but I ended up not needing any of them at all. For the impatient, they’re there, at least.

The iOS version of Tony Hawk’s Pro Skater 2 is no longer functional on modern hardware, but even when it was new, one of the biggest problems people had with it was the control system. It went with the common route of just mapping a virtual controller onto the screen and calling it a day. It wasn’t horrible by any means, but it was pretty hard to bust out tricks the same way you could on the PlayStation version. Since then, there have been a bunch of great skateboarding games that brought their own ideas on how best to make an extreme sports game work on the touch screen. SuperPro Snowboarding tackles the problem in a way that looks seriously ungainly in screenshots but actually works out very well in practice.

Your boarder is ostensibly always moving forward thanks to the nature of the sport and the side view of the action. Should you end up in a situation where you’re going backwards or don’t have the momentum to move forward, you can tap the screen to reset your position. Your tricks are all lined up on the left side of the screen as you unlock them, forming an easy-to-access bar with visual representations of the tricks that makes it clear at a glance which move will come out from which button. A single button on the right side of the screen allows you to crouch down into a jumping position, and releasing it makes the player jump. On the bottom-center of the play area, a dial will appear when you’re airborn that starts the player spinning in whichever direction you swipe it. To grind, you simply approach a rail, jumping on it if it’s at a different elevation from your character. Finally, tilting the device left or right allows you to flip. There are also buttons on the HUD to instantly restart your run or review your objectives. 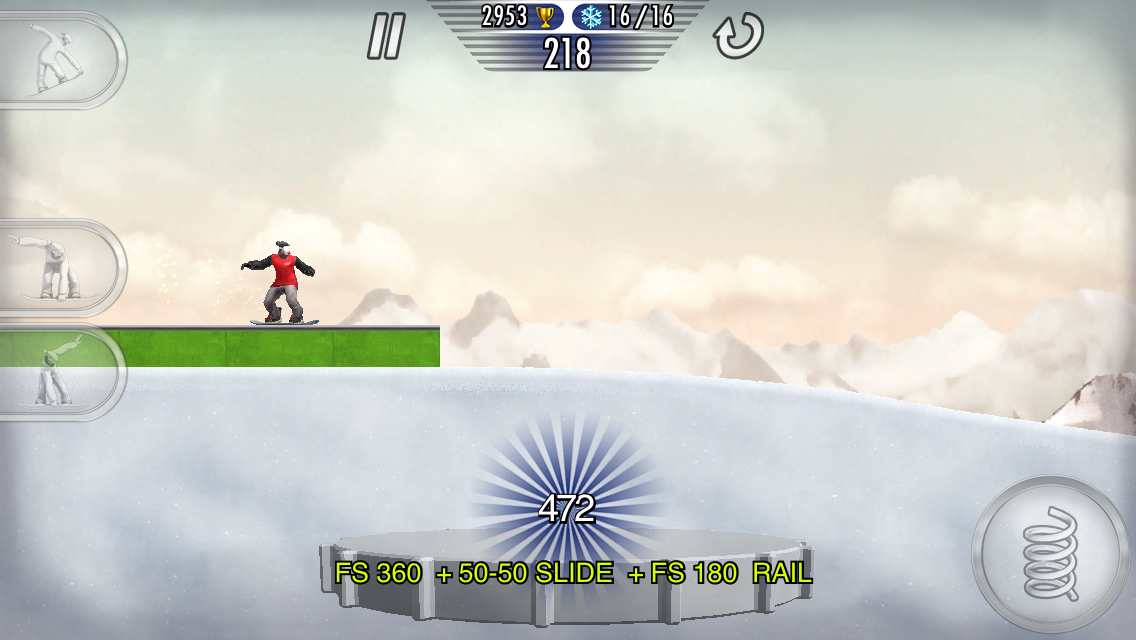 Just reading all of that, it sounds like a nightmare, but it somehow all comes together great when you’re playing. Much like Tony Hawk, after a little practice, you’ll soon be chaining together ridiculous combos, racking up huge points, and basically feeling like a superhero ninja on snow. If you have a particularly awesome run, you can upload a replay of your feats to Everyplay to show off to other players. The depth of the trick system rivals the greats of the genre, hitting that same sweet spot of risk vs. reward that keeps you coming back to see if you can improve your score just a little bit more by chaining something new here or holding a grab a little longer there. The game also has full support for Game Center, with a list of achievements and leaderboards, along with the ability to challenge your friends to beat your scores.

The game looks gorgeous and runs like a dream on my iPhone 5S, but that comes at a price, since if you’re packing anything less than a 4S or iPad 2, you’re out of luck. There’s a surprising amount of variety in the backgrounds without leaving the relative confines of reality, and important elements like grindable surfaces clearly stand out. The animations on your boarder are also great, with transitions between the tricks looking smooth and the tricks themselves looking stylish. The sound design doesn’t fare quite as well, with decent sound effects but repetitive, generic music. It’s very much off-brand Offspring minus the lyrics, which fits the theme well enough, but grates a bit in the long run thanks to a lack of variety. That said, you can turn off the music in the options and play your own, so it’s not a serious issue by any means. 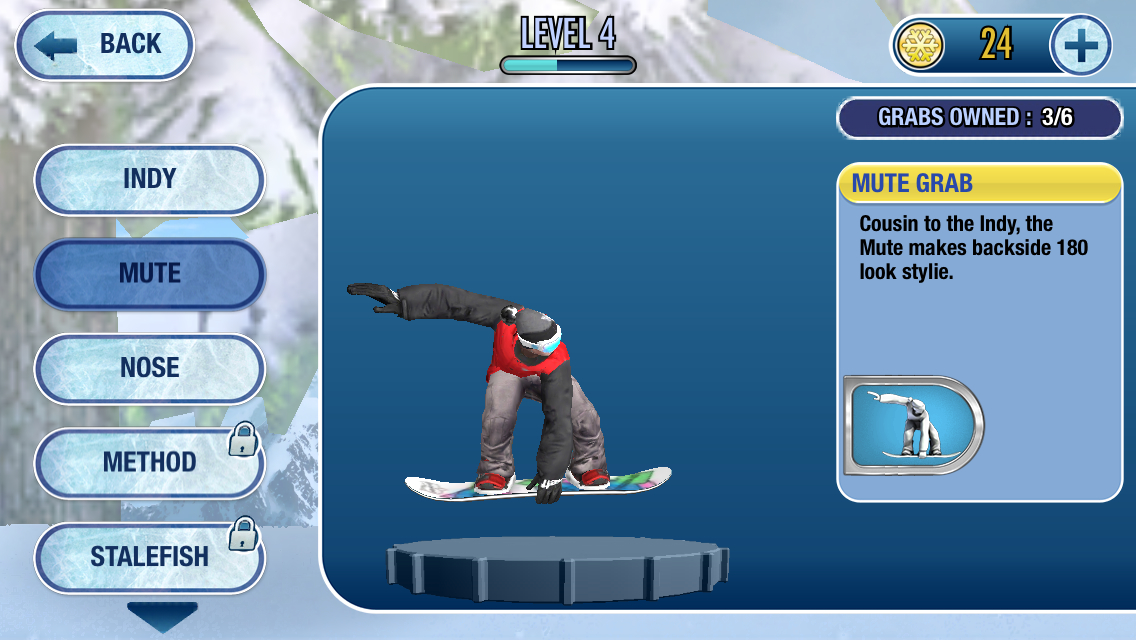 In total, there are 25 stages, which is not a very large amount given their relative brevity. The sheer replay value inherent in the game’s design stretches them well beyond their base value, but I would certainly like to see more. With a great trick system like this, it’s a shame there isn’t at least one level with a timer and a half-pipe that lets you just go nuts trying to rack up as huge a score as possible. I also would have liked to have seen more locales for the action. I don’t think fans of this type of game will have a lot of complaints, since the replay value is high, but if you’re the type of player that just runs through stages once in a direct charge to the end, you will probably feel like this game is a bit on the short side. The developer seems to be interested in adding more levels, so hopefully this will be less of an issue in the long run.

By far, the most important part of a trick-based extreme sports game is nailing down the core scoring system and physics, and SuperPro Snowboarding has knocked it out of the park on that count. The developers have clearly done their homework on the genre and as a result, even with a stage count edging on the lower side, the game still has nearly infinite replayability. For the price, this is a really easy game to recommend, especially for fans of snowboarding and Tony Hawk-style extreme sports games. Even if you aren’t, you should give this game a try. Like a few people in our forums, you might be surprised with how much fun you have.