One of the more surprising things that the rise of social and casual games has revealed is just how much everyone loves spelling. Where were all of these people when I was looking for Scrabble players? Or was it the fact that I insist on playing the game in the buff to maximize the flow of my chakra? Oh well. Wherever they were at that time, they came out later in full force, and now there are mountains of word games. At first there were mostly knock-offs of Scrabble or Boggle, but as in any competitive genre, everyone started looking for their own spin, leading to some incredibly imaginative variations. Spell Quest: Grimm’s Journey (Free) isn’t treading on completely new ground, certainly owing a debt to the classic Bookworm Adventures, but thanks to a few good twists and an extremely polished presentation, it more than carves a place for itself.

In Spell Quest, you play as Grimm, an adorable little reaper who’s on a quest to, I think, viciously kill any and all rabbits in sight. Something like that, anyway. The point is, you need to go through a bunch of levels and beat the stuffing out of monsters with your superior knowledge of the English dictionary. Each stage contains one or more monsters and some treasure, and the path forward is always paved in letter tiles. To do damage or claim treasure, you simply have to choose letters from the five by three grid at the bottom of the play area to make a word. The tiles don’t have to be touching, and outside of certain challenge stages there is no timer, so feel free to let your brain go wild trying to make combinations. Once you’ve decided, you can let fly with your attack, doing damaged based on how many and which letters you used in your word. The enemy will counter-attack in some fashion, and that continues until someone’s life bar is depleted. 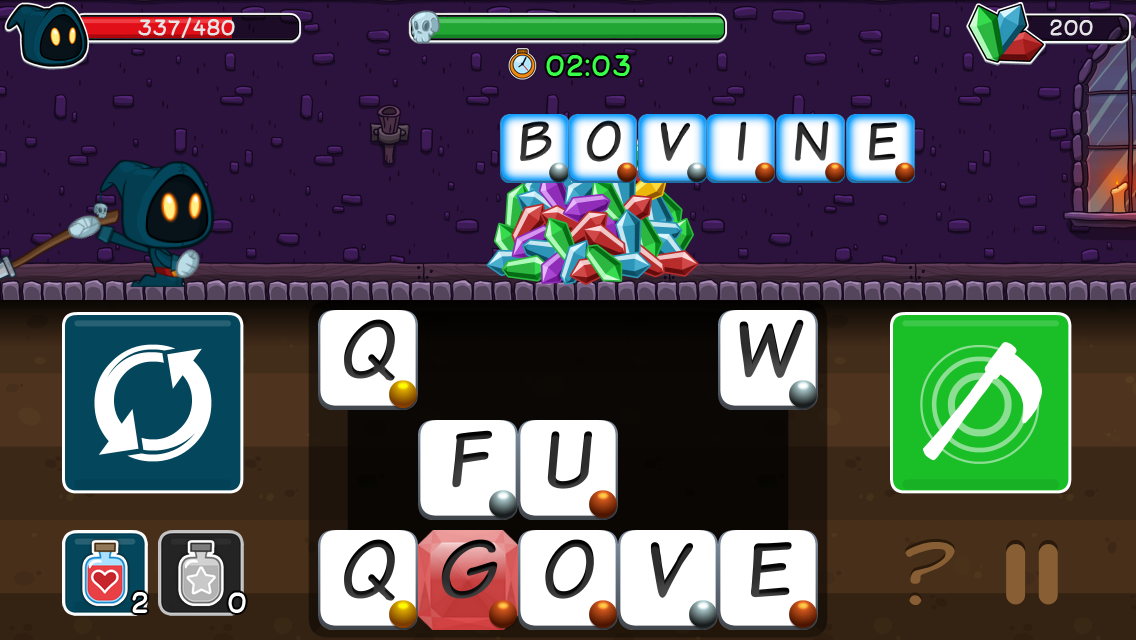 Enemies can inflict a massive range of status effects on you with their counters, including turning some of your letters into unusable stone, inverting the print on them to make them slightly harder to pick out in a pinch, turning them into whirlwinds that switch letters every turn, and so on. Sometimes these status effects can benefit you, like when a monster changes a whole row of your letters into a useful letter like ‘E’. Crystal letters will also sometimes spawn, which boost the damage of your attack when you incorporate them into a word. Some enemies, especially the bosses, require certain methods to take down. You’ll have to make words starting with vowels to do any damage to one ghost, or use corner tiles to make up words to take down a vicious zombie. Between all the different status effects flying around and the specific tactics you have to use on particular monsters, Spell Quest has a lot for the player to take into consideration beyond simply putting together a word, but we’re not finished yet.

Each stage has three stars to earn, but they work a little differently here than in most games. Playing through a stage normally will earn you one star, going through again under a time limit will earn you another, while the last star is earned through a stage-specific challenge. In one stage you might not have access to half of the alphabet, for example, while in another you’ll have to use words of a precise length to deal damage. You’ll have to run each stage at least three times if you want to completely clear Spell Quest, but the variety of the challenges constantly keeps you on your toes and reassessing the way you’re playing, so it never feels like a grind to head back into the same stage again.

Defeating enemies and clearing stages earns you cash that you can use to buy a constantly increasing list of upgrades and items. In addition to the usual things like health upgrades and potions, there is an assortment of books that modify your capabilities in very specific ways. You can only equip a limited number of books at a time, up to three by the end, so you’ll have to choose what’s most important for you at any given time. Equipping the books allows them to accumulate experience, increasing the power of the effect they give. They’ll eventually max out, at which point you have to decide if you want to put your powerful book on the shelf temporarily for something that needs the experience. 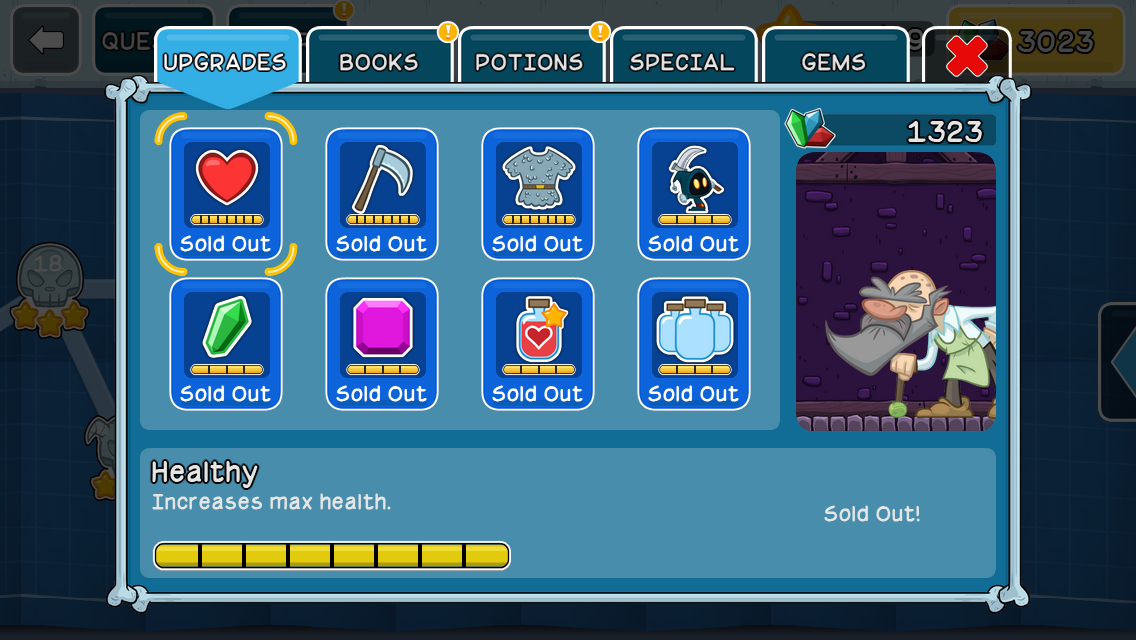 The game offers IAP in the form of a reasonably priced currency doubler and currency packages. Without the doubler, you will likely hit a point where you’ll need to grind a bit of cash to afford upgrades, but with it, you’ll have more than enough to buy everything in the shop and then some. If the doubler feels a bit too much like cheating to you, but you still want to toss a couple bucks to the developer, you’ll be happy to know that you can activate or deactivate the doubler at your will after you’ve bought it. There’s also a great spread of achievements and leaderboards implemented via Game Center, giving you something else to go for beyond simply collecting all the stars.

Ultimately, the biggest strength of Spell Quest is in how frequently it forces you to adopt new tactics. One of the problems that plagues word games is that once you learn their initial mechanics, the game never really changes all that much. You’re doing the same thing at every stage of the experience. There are certain skills that will help you all the way through in Spell Quest, of course. A big vocabulary will always be handy. With all of the other things going on in the play field, though, you can’t simply look for the biggest and best word possible without taking a lot of external factors into account. As a result, the play experience is fully engaging from start to finish. 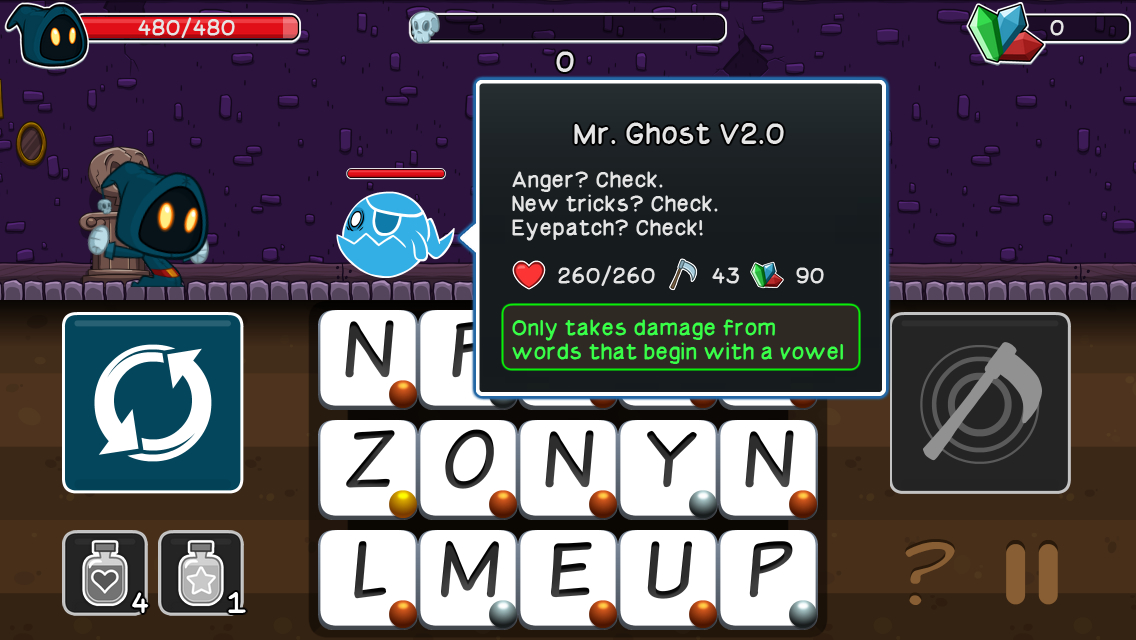 The only real issue I have with Spell Quest: Grimm’s Journey is that once it’s over, it’s over. There’s quite a bit of game here, but I devoured it fast and found myself still very hungry for more. Once you’ve leveled Grimm’s abilities to their fullest extent, replaying the stages isn’t nearly as fun because of how overpowered you are, and there’s no endless dungeon or anything like that. It’s a great trip while it lasts, though. If anything, it reminds me of 10000000 ($2.99) in that I had trouble putting it down, and when I finally did, it was only because it was finished. For free, you’d be silly not to check this game out, especially if you enjoy word games.