Never has a video-game title more aptly summed up its experience than Marvel Run Jump Smash ($0.99), and it’s as fun as it you would assume. Marvel RJS puts you in the spandex-clad bodies of iconic heroes that came blasting out of the mind of Stan Lee like webbing from Petey Parker’s web-shooters–but with a twist. You start out as an agent of S.H.I.E.L.D.–either Samuel L. Jackson’s Nick Fury or, uh, some other person who is not Samuel L. Jackson–and run, jump, and shoot your way through bad guys and obstacles like gouts of flame and electric gates. Along the way, you’ll come across hero tokens that bear the likenesses of one of the four superheroes you set to your active team before starting the game.

Touch a token and your S.H.I.E.L.D. agent is replaced by a super-powered avatar who explodes onto the scene, clearing away a screen’s worth of booby-traps and granting you control of trademark moves. Cap flings his shield off to the right, making quick work of enemies waiting to pounce; Hulk predictably and appropriately Hulk-smashes everything in his path, Iron Man fires blasts from his advanced armor, and so on. Heroes also act as a buffer: get hit, and you revert back to your S.H.I.E.L.D. agent to continue the run. 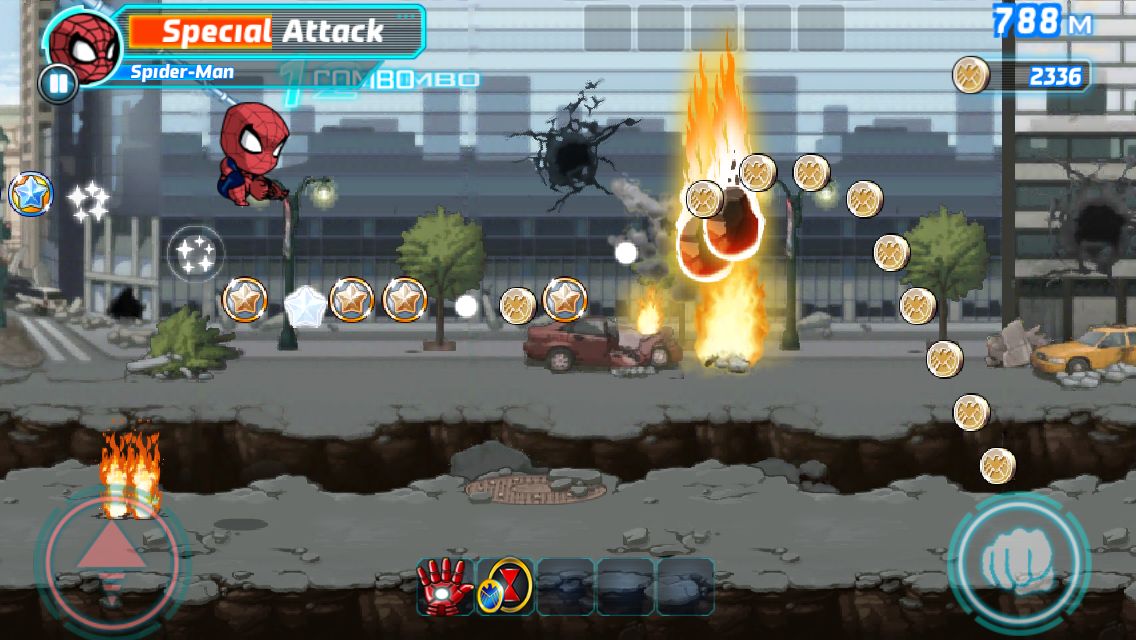 Besides serving as human shields, each hero has a special jumping ability. As you hurtle ever rightward, you collect groups of coins. Collecting every coin in a group without getting hit increases a multiplier that factors into how much spending money you receive at the end of your run for upgrades like boosting the time you control heroes, who only remain on the battlefield for a short time. Each group of coins is arranged such that only the last hero whose token you came across can reach every last one using their special jump. Iron Man fires his thrusters and takes flight to nab coins high in the sky. Black Widow can hover in midair to grab coins hanging just out of reach, and Hulk can drop straight down–the only way to pocket vertical lines of glittering gold.

The arrangements of coins, and the obstacles and enemies littered among them, become trickier to navigate as you move along. Trickier, and loads more fun. Every series of obstacles the game throws at you is designed to test your mastery over each hero’s unique skills and movement. Executing a parkour-like sequence of gymnastics through tight bunches of enemies, coins, and obstacles both inanimate and barreling toward you–and coming through the other side unscathed and with fuller pockets–is immensely rewarding. 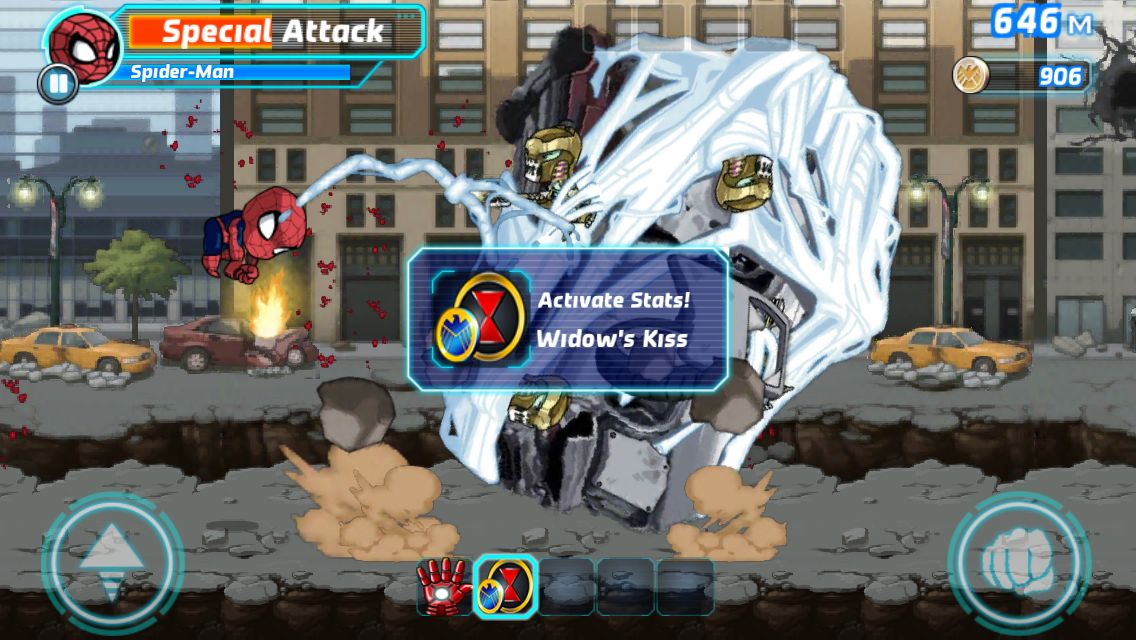 You can deepen each character’s bag of tricks by purchasing random perks such as a second chance to extend your run after getting clobbered and the Winds of Asgard, which carry you above the chaos for a few second before dropping you to the ground. Each perk is useful, but they’re a bit pricey and come up randomly, slot-machine style. You’re better off saving up for upgrades with a higher cost-to-usefulness ratio such as keeping heroes in your possession longer and increasing the amount of cash you earn at the end of a run.

Predictably, you need more fake money for upgrades, character perks, and unlockables than you can earn over a dozen runs. Spider-Man, Thor, Hawkeye, and Captain Marvel tempt you with their siren’s call from beyond a pay gate, but that call turns into a screech when you take a gander at their price tags. There are several ways to earn free money, ranging from a daily reward and ubiquitous “watch this 30 second video and receive fake money!" offers to much bigger commitments, like signing up for a service in exchange for six digits worth of fake money. Pony up or prepare to grind. 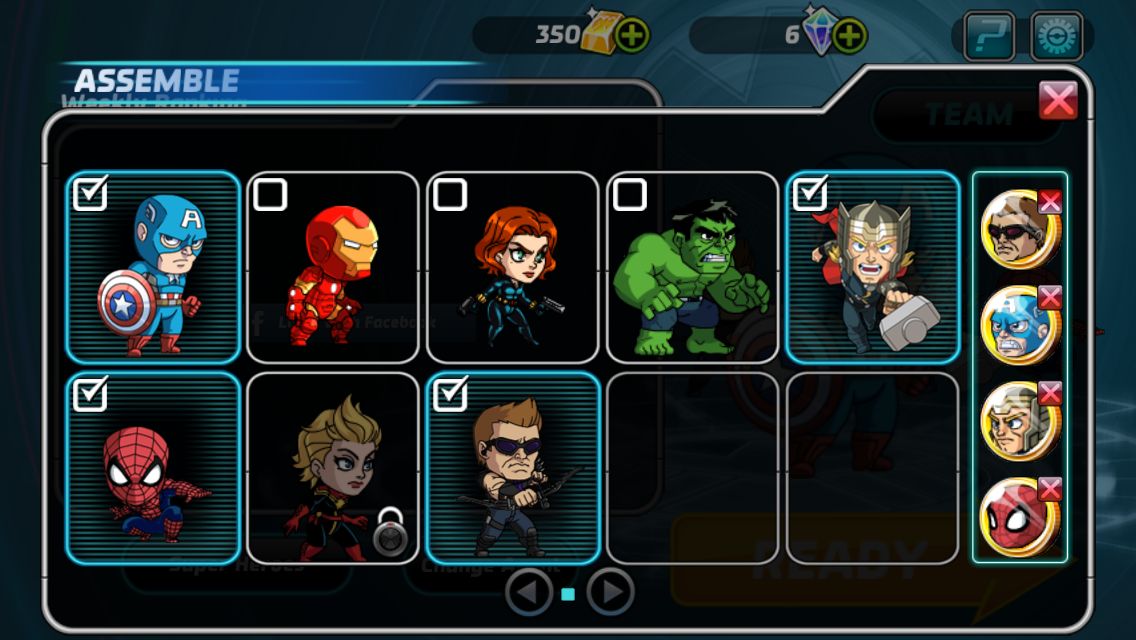 Fortunately, the unique repertoire of your starting fantastic four keep the game fun, and the cost of entry is cheap. Marvel Run Jump Smash is far from the most sophisticated and addictive runner in the App Store, but comic-book fans looking for a colorful, fast-paced, and challenging experience should suit up.