It’s a bit of a mystery as to why Dong Nguyen’s Flappy Bird (Free) suddenly hit it big seemingly overnight a few weeks ago. Since then, the game has been glued to the number one position on the iTunes top free download charts. It’s not the first time an odd (and old) game appeared from out of nowhere to topping the charts, as Backflip Madness ($0.99) went from weird obscure game we enjoyed in a TA Plays to an internet sensation all because of a single video from PewDiePie.

Flappy Bird had none of that, in fact, I think I even mentioned on one of our many Twitch streams of the game that it made no sense that it was charting so high, just like how every now and again you’ll see those very odd MP3 downloader apps shoot up to the top of the charts and disappear. Well, if you thought the Flappy Bird fad would disappear just as quickly as it arrived, you haven’t looked at the top charts lately. Dong Nguyen’s Super Ball Juggling (Free) and Shuriken Block (Free) are currently #2 and #6 respectively on the top free download charts. 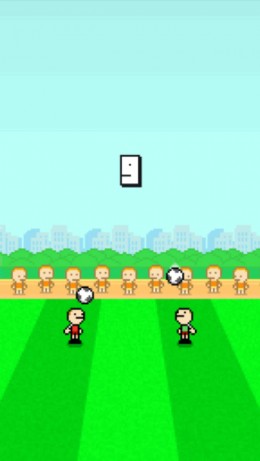 I’ve fielded a number of “WTF"-laden instant messages today from people who have noticed these games charting so high, particularly because Flappy Bird features no cross promotion, “More Games" button, or anything else. Presumably, the only way you’d ever find these other two games would be by directly exploring what else the developer has made on the App Store. While no one seems to have any idea what is causing the insane virility of these games, they’re worth downloading just to see what all the fuss is about.

Both Super Ball Juggling and Shuriken Block are simple single tap games that feature instant death following any mistakes, just like Flappy Bird. In Super Ball Juggling, you’re tapping to bounce a soccer ball as many times as you can. Meanwhile, in Shuriken Block, you time your taps on the screen to stop incoming ninja stars from lodging themselves into the skulls of (presumably) unsuspecting victims. Each game is very weird, and just like Flappy Bird, features instant game overs leading you into this endless loop of, “Wait, what? OK, I can totally score higher than one."

As far as what sort of black majiks are powering these games’ stickiness on the charts, that’s up for debate. It seems like everyone is playing Flappy Bird though, so it seems to make sense that folks would explore the other brutal titles from the same developer. Either way, we’ve reached out for some kind of inverview to get the answers straight from the source, we’ll see what happens.