Now, instead of watching all that blood splatter, you can cause it, as John Woo brings his over-the-top take to iOS in Bloodstroke ($0.99).

You play as Lotus, a blood-red jacketed agent who works for the Phalanx corporation. Your job is to escort a doctor through treacherous levels, filled with devious enemies that splatter very nicely. Your goal is to get to the large black X at the end of the map. 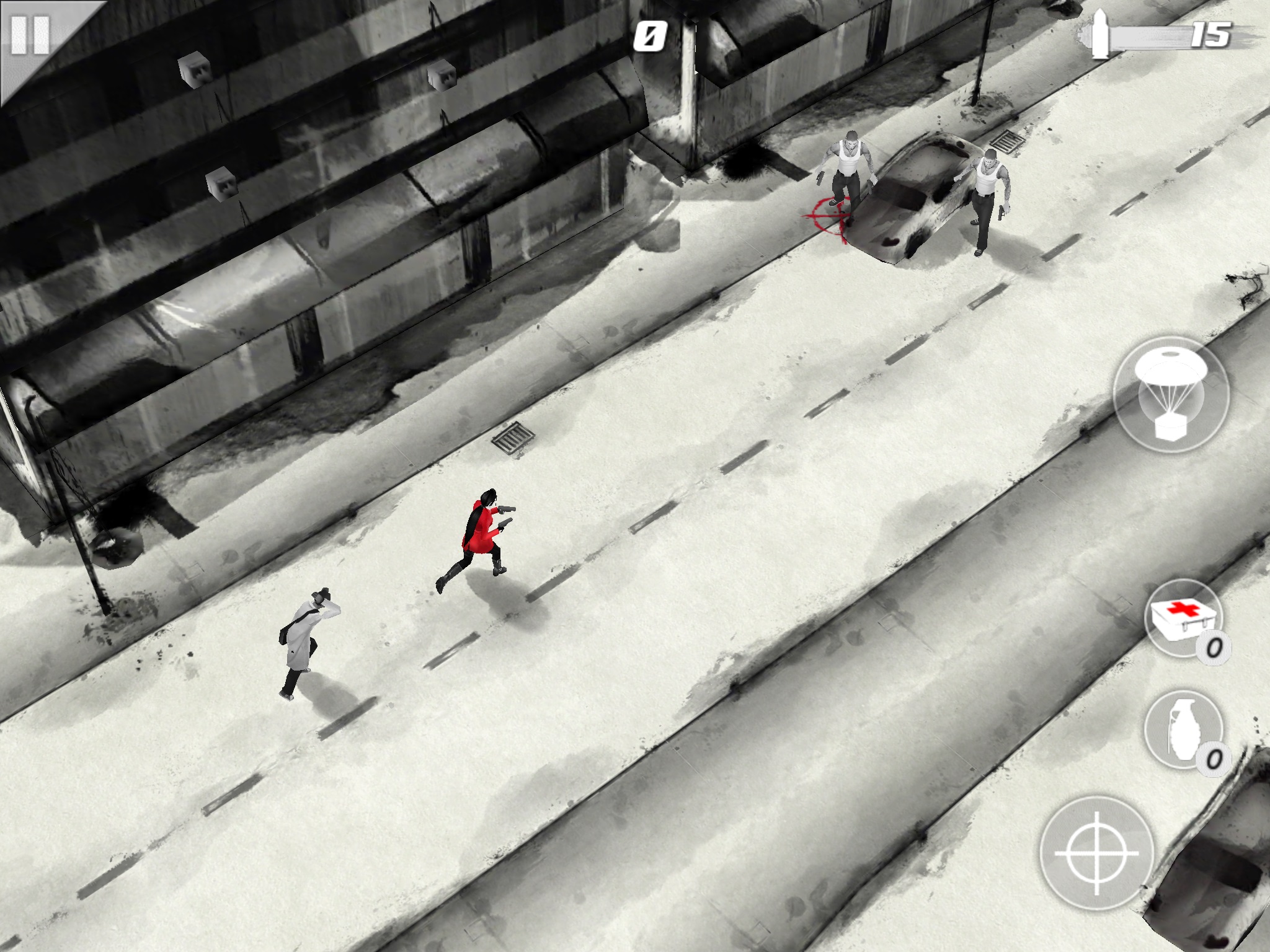 Graphically, Bloodstroke does a great job with its black and white design. The game looks very good using it, and serves as contrast to Lotus’ jacket and, of course, the multitude of blood you’ll spill. Story cutscenes are served via comic panels, which fit in great with the game’s theme. Sound and music are both very well done. The soundtrack is provided by Far East Movement, and adds a feeling of modern music to the traditional Chinese music used. Each weapon makes its own noise, and they sound authentic. And you can’t deny the satisfying swish your blade makes as you cut through someone.

At its core, Bloodstroke is an isometric on-rails shooter with levels that have a three-star rating system. The game will constantly move you throughout each mission. It’s not strictly on rails, though, as you control Lotus as the camera pans. This is essential, as you earn more points by running into enemies, resulting in a melee kill, as opposed to shooting them. As Lotus, you are essentially invincible, and cannot be hurt. That’s because your protectee, the good Dr. Koorse, is very vulnerable. Enemies will target and attempt to kill him. If he dies, you fail. 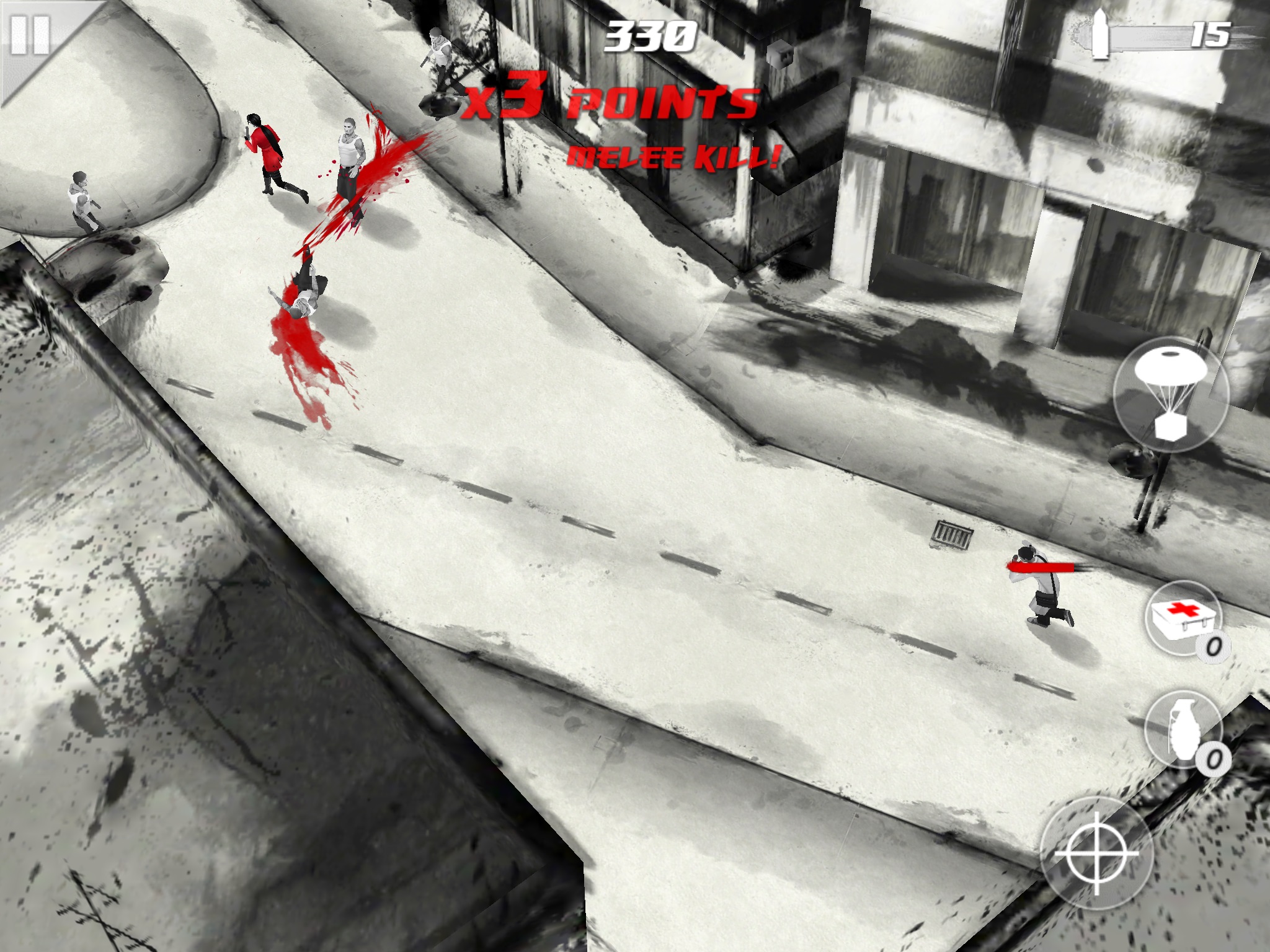 Controlling Lotus is pretty straightforward. You run using a virtual stick, while the opposite side of the screen is used for shooting, grenades and health packs. Lotus will always be running, even when you aren’t using stick, because of the on-rails aspect.

Enemies will attack from all sides, giving you some strategic options. Do you stay by the doctor’s side and fire at enemies, hoping to kill them before they kill the doctor? Do you run ahead to kill everyone and clear a path, hoping enemies don’t come up from behind or to the side of Koorse while you’re up front? While overall the game is pretty limited and linear, it does allow you to determine how you want to go about your particular mission. 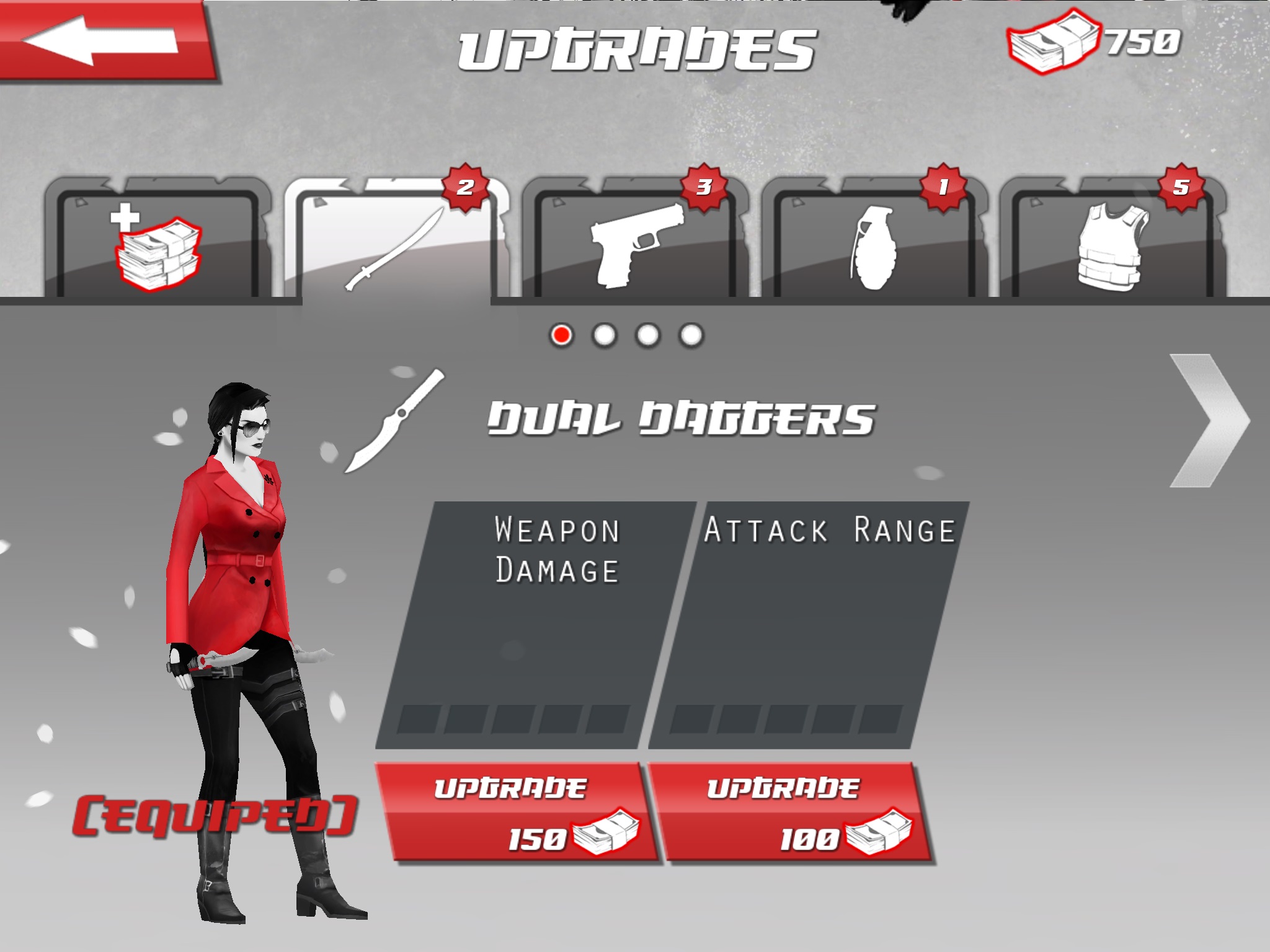 Aside from the standard escort, you’ll also have traditional wave missions, where the doctor stands in one location and enemies come at him from every side. As is typical with that format, subsequent waves will become stronger than the ones before them. You’ll also battle waves of enemies in the arena levels, which are spread throughout and help you earn some extra cash.

Cash, as always, is king. With it, you can buy special items to help you, such as grenades. There’s also a fairly hefty upgrade system, which allow you to not only buy new weapons, but upgrade them in categories such as speed and damage. You begin with a handgun and two daggers, but you can buy a few different projectile weapons, and a few different melee weapons. If you choose not to buy them, no worries, as they will eventually unlock through normal play. You’re also able to improve the health, armor and health regeneration of Dr. Koorse, because let’s face it, he’s pretty useless. In-game cash can always be purchased for real cash, the cheapest pack being $2.99, and you attempt to earn 86 achievements.

Bloodstroke is a terrific action game, and a great introduction to John Woo action on mobile. There is no multiplayer (perhaps too hard to implement considering the game mechanics), no leaderboards, a pretty typical story, and the levels are fairly short, but the inclusion of a large number of achievements, and a three-star system should keep you going. Now if you’ll excuse me, I’m off to watch Hard Boiled.