It’s hard to believe that it’s been nearly five years since Limbic first launched TowerMadness ($2.99) on the App Store. As a 3D open ended tower defense title, it was also one of the first big hits in a TD genre that is now completely saturated. In this day and age, there’s little to be said about TowerMadness 2 (Free) that hasn’t already been said through countless other TD titles. True, it’s still an excellent tower defense game and expands upon the original in every fact, however, it doesn’t do much that hasn’t been seen before.

If you’ve not played the original, TowerMadness 2 continues the story of an alien invasion bent on abducting all the sheep in the land. Your mission? To defend said sheep by placing towers along the aliens’ abduction path. Towers are loosely classified based on three different categories (energy, fire and electro) with the alien baddies being weak/strong/neutral against those classifications. Simply put, TowerMadness 2 is old-school TD gameplay with a combination of set and open-path (think Fieldrunners) maps. There’s really nothing to complain about regarding the core mechanics as TowerMadness 2 leaves little to the imagination as far as its core mechanics are concerned. 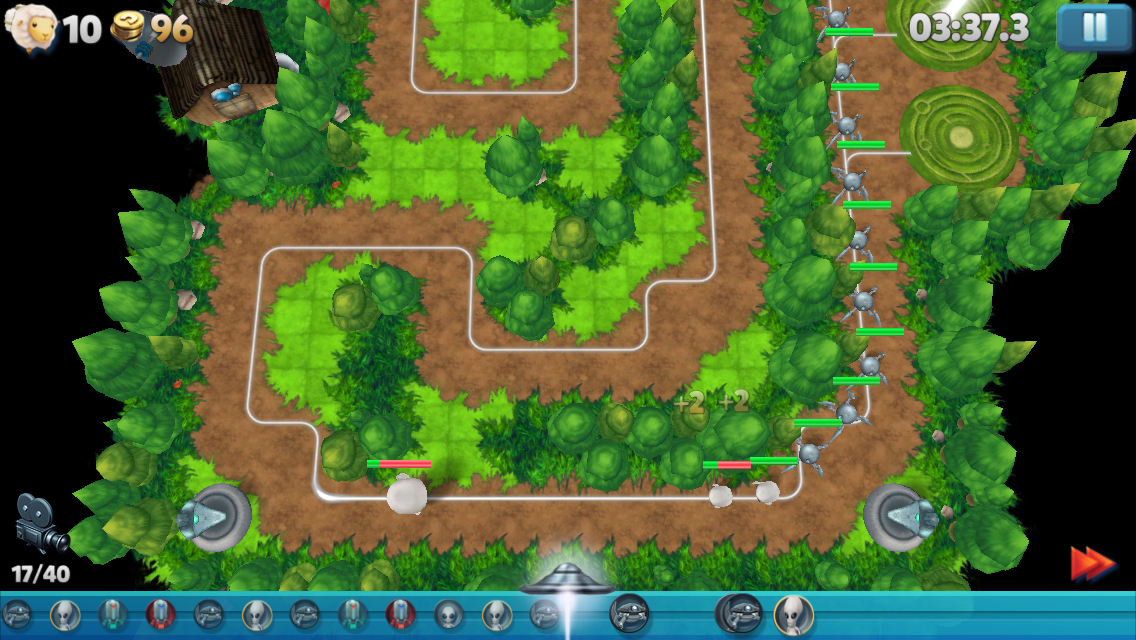 While TowerMadness 2 doesn’t feature a premium currency, it does incorporate IAP via full tower unlocks (which basically just bypass currency requirements). Personally, I don’t think it’s required as the game’s pretty liberal in terms of earning currency, but it’s a nice balance for players that want to instantly unlock all the levels of a favorite tower. There also seems to be an unlimited amount of ad videos that can be watched to earn currency, if you got the time.

As a sequel, TowerMadness 2 simply expands on everything featured in the original. There are a variety of new towers across all three types, additional defense systems, and a more robust upgrade system fueled by the in-game currency. There’s also a lot more variety in terms of maps, with a lot more maps that focus on tower selection and placement rather than the standard ‘lane-building’ open world maps that the original used. Otherwise, TowerMadness 2 sees a standard bump in visual quality that is expected with a game whose predecessor is almost half a decade old. A decent replay system also adds some replayability. Similar to my gameplay comments above, I felt the sequel additions to be pretty standard with little in terms of surprises. 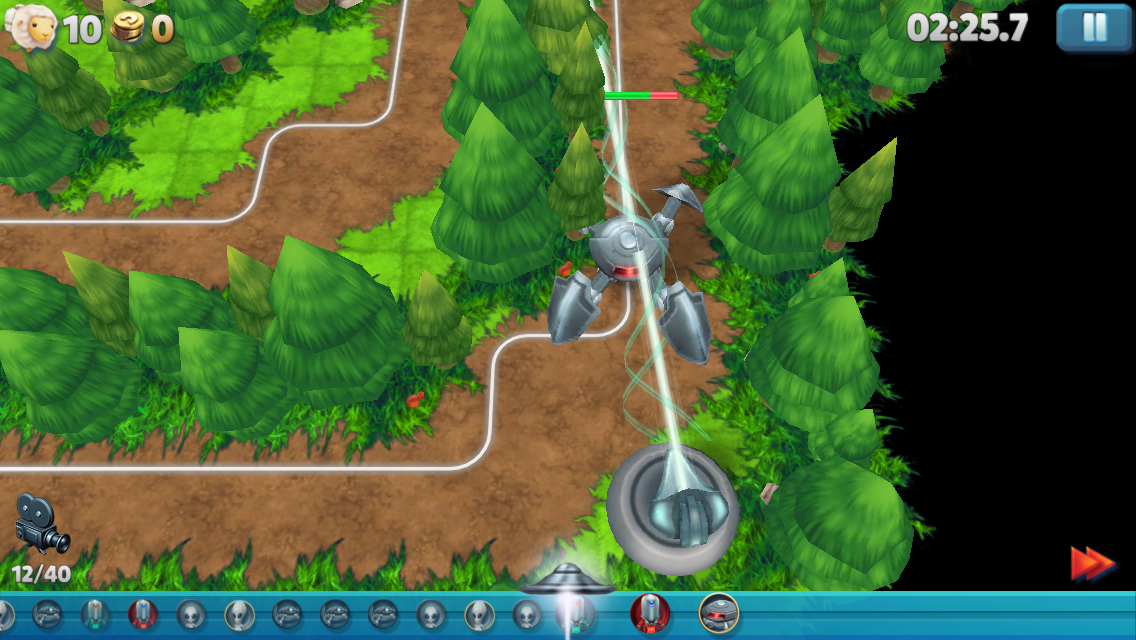 Each of the game’s regions (four in total) also add environmental aspects to consider. For example, the game’s ‘desert’ region makes all your towers overheat, forcing them to pause for a few seconds as they recover from overheating (and encourages greater placement of towers vice pouring resources into less towers). I don’t think the environmental quirks substantially change the strategies that need to be employed, but they’re interesting nonetheless and act as one of the few areas that offers something new that I haven’t really seen before.

The difficulty in this sequel also seems to be turned down with a greater emphasis on the game’s other modes in order to satisfy any challenge. Alas, I think the game’s main campaign is almost too easy, but leaderboards (based on completion times) and an ability to manually push enemy waves faster allow players (which in turn lead to faster completion times) to challenge themselves within the campaign. The campaign does add some challenge in the latter missions, but until expect liberal use of the fast forward button. 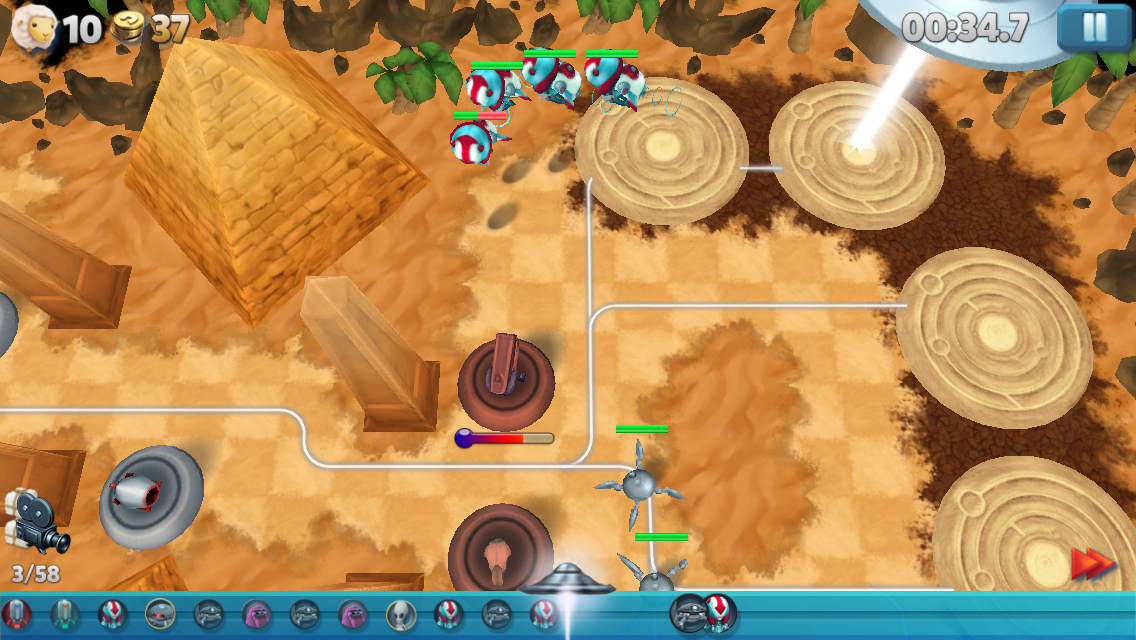 Make no mistake, TowerMadness 2 is a great sequel and another good addition to the TD genre. The problem lies in the fact that there are so many other great TD games, and this sequel doesn’t do much in terms of innovation. Every improvement witnessed is expected to be there in a sequel these days. That may not be fair, but it’s the current landscape for iOS TD titles. Regardless, if you’re a TD aficionado and are looking for the next great title to play through, by all means check out TowerMadness 2. However, don’t expect to see anything you haven’t already seen.