I’m always a bit conflicted when it comes to Kairosoft’s games. After making a big splash with Game Dev Story ($4.99), a hit simulation that was both fresh and hard to put down, they started to release more and more of their back catalog. As they did, it became more apparent with each release that Kairosoft weren’t actually the innovating type they appeared to be initially. Rather, they had a few different spins on the simulation genre and basically bolted new frames onto them. For example, you wouldn’t think car racing and soccer have much in common, but the Kairosoft takes on them were quite similar. In recent years, they’ve tried to implement deeper mechanics and new ideas into their sims, resulting in titles like Dungeon Village ($4.99) and Epic Astro Story ($4.99), which seems to have reinvigorated interest in their games. Sadly, that effort seems to have tuckered the poor developers out, because they’re falling back into their old ways with their recent releases.

Ninja Village ($4.99) is basically a new coat of paint splashed on top of Epic Astro Story. Your goal is to develop your village to support the Shogun in his bid to unite Japan. You’ll do this both by contributing funds to hire an army and by training up villagers to personally take arms in battle. To keep the coffers full, you’ll have to set up a functioning economy through farming and shops, and you’ll also need to provide lodgings and equipment for the people who choose to reside in your town. New building types, equipment, unit types, and land expansions can be earned by subjugating nearby clans and attracting new visitors to your village. 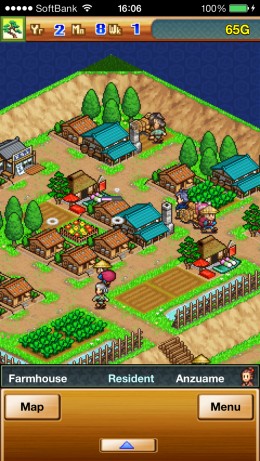 You’ll start off by building up your main village. There are enemy clans immediately surrounding you that you’ll have to take out to claim their land. Once you’ve done so, their leaders will join your village and their land will be yours. It doesn’t take long to take over the immediate area, and soon after, a deposed Shogun will show up at your door, seeking your aid in his efforts to unify the country. Once you’ve reached this stage, you can switch to a map of the whole country that shows neighboring warlords. To defeat them, you’ll need to strengthen the Shogun’s army. You can choose who you want to attack and when, and after you’ve defeated a warlord, the remaining ones get a bit stronger. Defeated warlords will join your main village, and the treasures you earn through your victories will unlock new features for your village and army.

Like Epic Astro Story, you have to pay a little bit more attention to what you’re doing than in most of Kairosoft’s other games, but it’s still not a terribly difficult game. You’ll win if you keep playing, more or less, but as ever, at a certain point in the game, 16 in-game years in this case, your score will be tallied up. You can continue on after that as long as you’d like, but the challenge is in trying to get the best score in that relatively brief period. Your score is dependent on a variety of factors, including cash on hand, the number of warlords you’ve subdued, the number of building types you’ve uncovered, and so on. 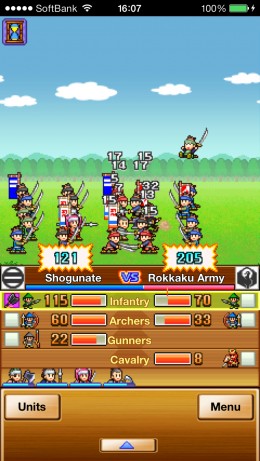 Graphically, this is the same stuff we’ve seen before, almost down to the pixel if you’ve played Oh! Edo Towns ($4.99). Historically speaking, the Japan of this game is about 300 years older than the Japan of that game, so it’s kind of weird that everything looks so similar. It’s not bad or anything, but I wish Kairosoft would try something new once in a while. We’re at the point where even the buildings are mostly recycled, leaving very little new to see at all. One small touch I do like is that your weapon and armor changes are visible on your little warriors. This was the case in Epic Astro Story as well, but it’s a rare enough case among 2D games that it bears mentioning. The music is familiar as well, though I suppose it’s all technically new. The sound effects and UI are the same as ever. It’s all very functional and there’s not quite as much esoteria hidden in submenus as some of their other games, but it’s still very much a design from the old feature phone days.

It might sound like I’m incredibly weary with this developer’s games, and to an extent, I suppose I am, but that’s not to say this particular game is bad by any means. If this were someone’s first Kairosoft game, they’d probably think it was the best thing ever. Like all of their games, this one grabbed me for a full playthrough, keeping me strongly engaged until I had poked around all of its corners. Having done so, I doubt I will ever play it again, but for a few bucks, I’m not unhappy with the amount of play I got from Ninja Village. I’m also happy to see that like Pocket Stables ($5.99), there’s not a trace of IAP to be found here, perhaps signalling an end to their brief fling with the concept.

If you look at this game as a candy bar, meant to be consumed, enjoyed, and then forgotten soon after, it’s certainly a good one. On a scale of Turkish Delight to Snickers, this is about a Kit Kat bar. I think I’m just a bit disappointed because I feel like these guys could do a lot more than what they’re doing, and now that we’re hitting the point where even the themes are getting recycled, their lack of ambition is all the more apparent. Ninja Village is a cool game, but how well you like it can probably be measured in inverse proportion to how many Kairosoft games you’ve already binged on. If you’ve only played a couple of their games, go for it by all means, but if you’ve played most of their lineup and find yourself getting a bit tired of the old hamster wheel, you’re not going to be missing out by taking a pass on Ninja Village.