King may not be the most popular bunch around these parts, but it’s clear they have a good understanding of how to make a game that grabs people. I’ve put in some time on all of their games, partly to assist my grandmother with difficult stages, partly because they are good for passing the time without commanding your full attention, and it’s my opinion that nothing else they’ve released has been on the level of Candy Crush Saga (Free). Bubble Witch Saga (Free) and Papa Pear Saga (Free) are both a bit too derivative without offering compelling reasons to play them instead of what they’re aping, and Pet Rescue Saga (Free) requires a bit more concentration than I’m generally willing to give to it. Candy Crush is simple and challenging, while still being pretty easy to zone out on while you do other things. It’s also King’s most popular game by far.

With that in mind, perhaps there’s little surprise in them returning to the match-3 genre with their latest iOS release. The challenge here for the developers is in coming up with something different enough from Candy Crush to give the whole enterprise a purpose, while still getting the same things right. Farm Heroes Saga (Free) succeeds in some ways, but falls short in others. Structurally, it’s set up very much like every other release from King. You’re given a board game-style map with all the stages laid out in order, and each one has to be cleared to open up the next. Depending on how many points you score, you’ll earn anywhere from one to three stars, and every once in a while, there’s a wall that prevents you from going any farther unless you spend some premium currency or ask your friends on Facebook. As usual, there are a ton of levels initially, and I also expect tons more to be added as time goes on. 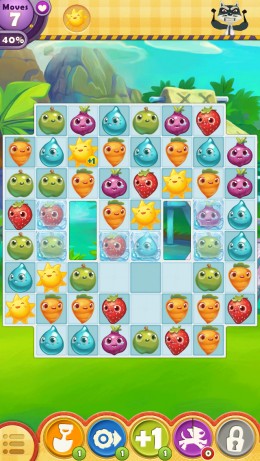 As I mentioned, this game is in the match-3 branch of the puzzle genre. The theme this time is a farm, so you’ll be matching up fruits and vegetables, along with the occasional barnyard animal. Like in any other game of this type, you can touch and slide to move a piece one space in any direction, with the aim being to match three or more of the same type in a row, horizontally or vertically. Nothing out of the ordinary here. Also keeping with the genre, if you match four or five of the same type at once, either in one line or in horizontal/vertical combinations, you’ll be rewarded, though not with special pieces as in other games.

Clearing a stage generally requires you to harvest a quota of the various pieces within a particular number of moves, though there are some special boss stages where you damage the enemy by matching a particular type of piece. If you meet your quota with some moves remaining, you’ll enter Hero Mode, which lets you play out your remaining moves with higher value pieces to boost your score. Those extra value pieces don’t just come into play in Hero Mode, however.

This is Farm Heroes Saga‘s twist on the genre. When you make a match, surrounding blocks will temporarily gain an extra point in value towards the quota. Making special matches will add extra points to more pieces, and matching five in a row will harvest all of the pieces of that type on the board. As is the norm for King’s games, this one starts off pretty gently, but somewhere around stage 30, the quotas start getting pretty high, so if you haven’t figured out how to take advantage of those extra points, you’re probably going to go nowhere fast. It’s a pretty good addition, in my opinion, since it creates a benefit to matching pieces even if they aren’t part of the stage’s quota. 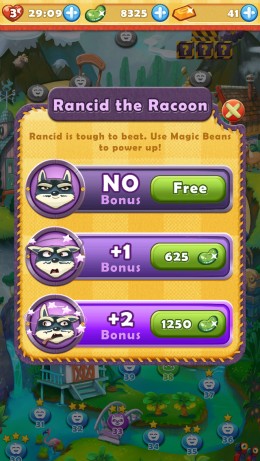 As you progress through the stages, new kind of obstacles and pieces will come into play. There are flowers that require you to make matches in adjacent squares a few times, eggs that need to be matched to hatch them into a single chick, which needs to be matched with two of its mates to be collected, grass tiles that will add a bonus to any pieces you harvest on them, ice that will freeze a crop in place until you can match it, and so forth. The board shape and size changes from stage to stage as well.

The boss stages are a new idea, though they don’t play out terribly differently from the regular stages. You’ll face some sort of evil raccoon, who apparently doesn’t have the right to eat. His life bar is represented by a percentage in the upper left-hand corner of the screen, and collecting specific crops will reduce it. You have to get his health down to zero before you run out of moves. If you’re having trouble, you can use some of the magic beans you earn by clearing regular stages to give your matches some extra punch. I haven’t found this necessary yet, but there’s no other use for the beans as near as I can tell, so go nuts if you feel like it.

There are, of course, boosters in this game, and King will happily sell them to you at a high price. As with Papa Pear Saga, this game uses a premium currency, presumably to add a layer of abstraction to shelling out real money. You’ll start the game with 50 gold, and the only way to get more is by opening your wallet. In a surprising turn, however, if you can wait out a fairly lengthy cooldown period, the boosters can all be used freely. Only once, mind you, before you have to wait out a timer on them again, but it’s a lot more generous than I’m used to with this developer. Other IAP aspects have not changed here, however. You have a limited amount of lives, and if you run out, you’ll have to wait for them to come back at thirty minutes each, use premium currency to get a full stock, or ask someone who’s playing on Facebook to help you out. 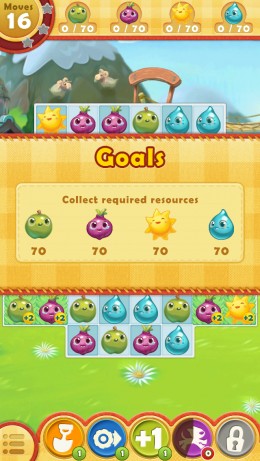 There’s also the customary paywall, and unlike some other King games, you can’t just do daily missions to pass these. Your only choice is to pay with premium currency or ask your friends on Facebook. The initial supply of premium currency the game gives you will see you past five of these gates, which is admittedly pretty far into the game, but I don’t care for the absence of the mission-based progression one bit. Their previous games started like this and later had the ability to pass by completing missions added in later, and I hope that’s the case here. As the game stands right now, you can access about 100 of the game’s more than 150 levels using what the game gives you for free.

The art style in Farm Heroes Saga is actually not too bad by King’s standards. It’s nothing special, but the characters look a lot less creepy than usual, and the visual design holds together a lot better than the recent Papa Pear Saga. Pieces are easy to distinguish at a moment’s notice both in shape and color, so colorblind gamers aren’t left out. The sound design is passable but not nearly as good as Candy Crush. That game really nailed its sound effects for successive and special matches, whereas this one is just a bit too laid back. It’s a small thing but it really affects how exciting the game feels. It’s not actively irritating the way Papa Pear had a tendency to be, but it’s just kind of flat.

This is probably King’s best game on iOS since Candy Crush, though it still falls well short of it. The gameplay variation is clever and I really enjoyed that, and putting in free boosters on a cooldown timer is definitely a step in the direction of fairness. The game gets ridiculously hard after a while, which is a positive in my books, but your mileage on that will vary depending on how stubborn you are. As with all of King’s games, the monetization aspects hold Farm Heroes Saga back from being all it could be. You’ll run through your lives pretty fast on harder stages, and those gates aren’t going anywhere for the time being. Still, even if you don’t intend to pay a cent, there’s quite a lot of content here, and for match-3 fans, I think it’s worth a play.