Like many other gamers, I’m a pretty big fan of Adult Swim’s iOS offerings. With every new genre the developer takes on, we get another great game that either offers innovative elements or a traditional experience so refined that it simply raises the bar against the competition. Castle Doombad squarely falls in the latter category. One of the first non-F2P Adult Swim games in awhile, Castle Doombad ($2.99) nails everything I could want in a ‘defense’ title and should be played.

In Castle Doombad, you play the role of a villain’s minion ensuring that your master’s abducted damsel remains in distress. Waves of heroes will break down your castle doors, climb ladders and scale walls, all in an attempt to climb to the top of your castle and save the princess. However, getting to the princess is just the beginning, as the heroes must actually make it out of the castle in order to succeed (which ends the stage in failure for you). Defeat every wave of heroes, and you win the round. 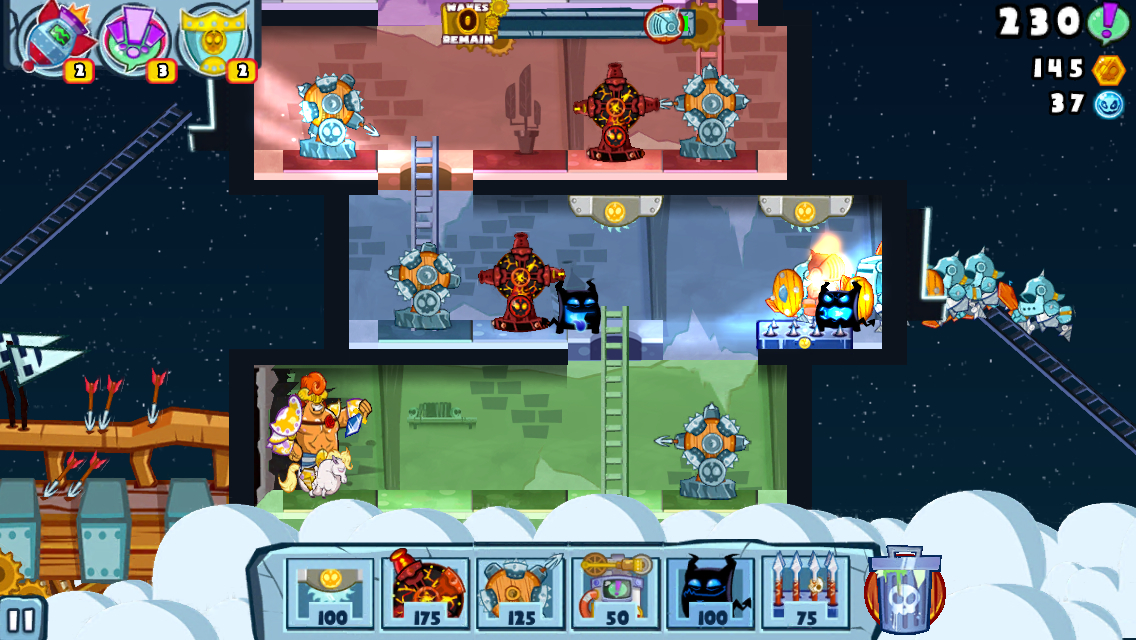 You’ll accomplish this by laying down traps, building weapons, and summoning minions to do your evil bidding. Castle Doombad broadly classifies each of your weapons into three different categories: automatic traps, minions, and manual traps. As you might imagine, automatic traps let loose their destructive force at timed intervals and have some restrictions on where you can place them. From a standard TD perspective, a lot of these weapons will feel familiar.

The other two categories are where Castle Doombad becomes a bit more unique. Manual traps share the same restrictions as the automatic ones, but are user-activated and are on cooldowns. Minions don’t have any restrictions, which makes them useful in conjunction with the other traps. However, players lose a lot of control over them as they are mostly autonomous. There are over 20 traps and minions to choose from, meaning that there is a huge potential for diversity in terms of play style. 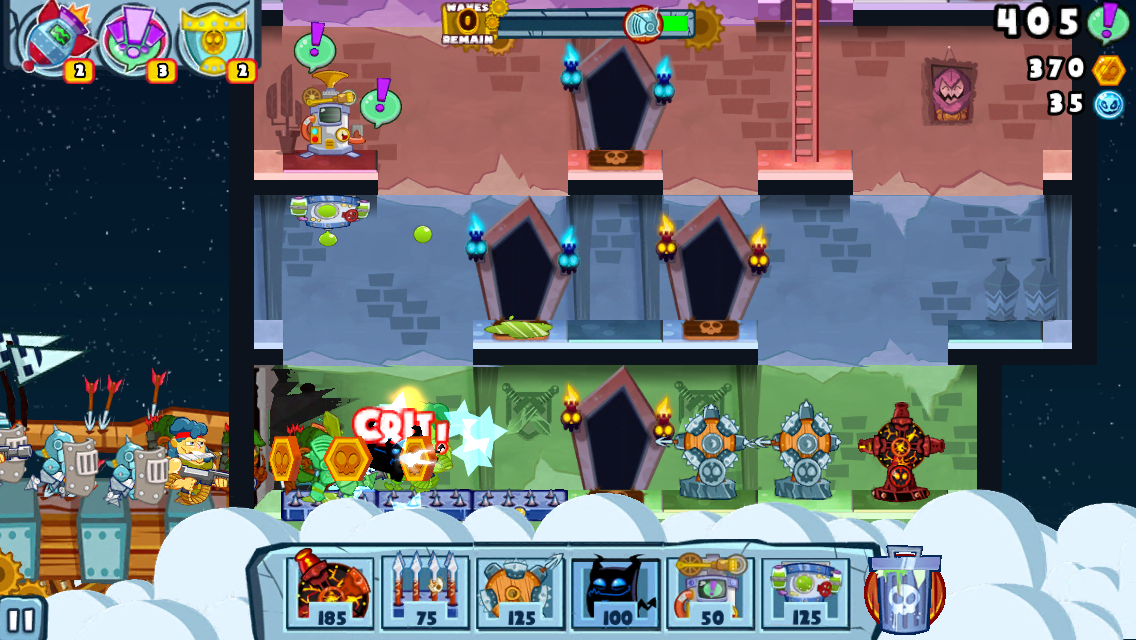 This diversity is one of Castle Doombad’s strongest elements. A lot of TD games offer tower options but levels are designed with a specific strategy in mind. With Doombad, it really does feel like you can employ a wide variety of strategies and still pass a mission. Sure, some techniques work better than others, but having a multitude of viable tactics go a long way towards replayability. Another high points is the enemy variety, which offers equal parts hilarity (the Sexy Knight is my fave) and strategy;.

Another thing that Castle Doombad nails is its progression curve. If you know what you’re doing you can easily play through each mission one after another, using the currency earned for strategic upgrades. However, if you’re looking to expand your horizons, replaying levels provide a generous amount of currency that can be used to unlock or upgrade traps. Premium currency exists for in-game power-ups (which I didn’t find necessary) but it can be earned via a quest system. IAP exists in the form of currency buys (along with a doubler) but I really never felt a need to even consider purchasing it. 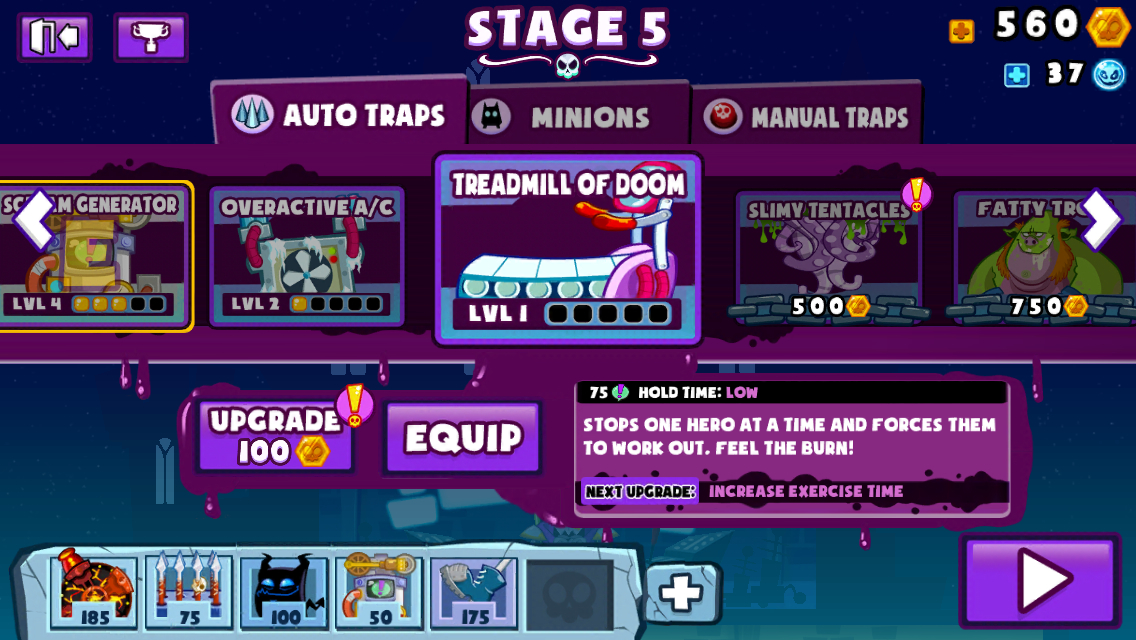 This might be due to the fact that Castle Doombad is simply a blast to play. Even while replaying old levels, I never got tired of the enemies, traps, and general hilarity that the game offers. The art style is amazing, the puns and little bits of writing are top-notch, and there are plenty of quests to attempt while replaying previous missions. Losing a match never felt cheap and while most of the stages are relatively easy, ‘Master Stages’ and bonus levels offer a decent challenge above and beyond the normal levels.

If it seems like there’s very little wrong with Castle Doombad, that’s because it’s true. Maybe one can make some superficial gripes about the lack of backdrop settings, but there’s more than enough variety in the actual gameplay to make up for that. Developer Grumpyface Studios does nearly everything right in making a highly enjoyable TD game in Castle Doombad, and you owe it to yourself to check it out.