Last month, Noodlecake Games talked a bit about their huge forthcoming update to Super Stickman Golf 2 ($0.99), which will see a new set of levels themed around Team Meat’s brutal platformer Super Meat Boy. That in and of itself is very cool, but today the team has lifted the lid on more details concerning this major update which is set to hit the App Store this Thursday.

Seeing as one of the huge draws to Super Stickman Golf 2 is its excellent multiplayer, this update includes some nifty new multiplayer features. The first is a new Turn Based Chat system that will let you more easily talk a little smack to your opponents. Then, if you’re really confident in your sick skillz, you can now place wagers on matches in the form of Golf Bux. Finally, if you’ve ever wanted to change your username for online multiplayer, this update will give you the option to do so. 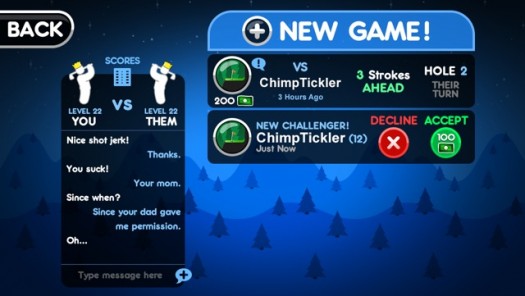 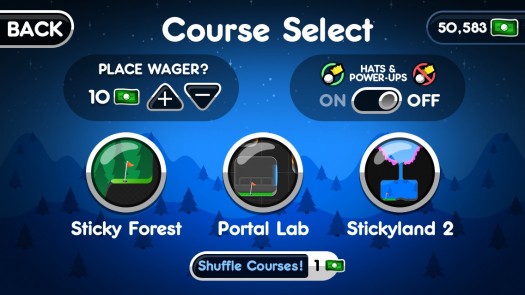 The next new feature is entirely cosmetic and just something cool to blow some of your extra currency on. It’s custom trails for your golf ball. If video games have taught me anything, it’s that entirely superfluous visual options are always a welcome addition.

As for the more substantial content in this update, there will of course be the new Super Meat Boy course, but there will be three additional new courses as well. Two of those are pretty standard Super Stickman Golf type of courses, one called Gears Land and one called Implausible Land. However, the third new course is a doozy, and really changes up the typical gameplay. It’s called Space Land, and as you might have guessed, its big hook is that there is zero gravity on this course. The physics in Super Stickman Golf 2 are already pretty off the wall, but this takes things to a whole new level. Check out this brief teaser of Space Land to see what I mean.

So there you have it, more details for the next Super Stickman Golf 2 update than you can shake a nine iron at. That’s not even all of it though, as Noodlecake mentions at the end of their blog post detailing this update that there’s even more goodies like new hats and achievements to look forward to. The update should hit this Thursday, so be on the lookout for it. Oh, and here’s a mega bombshell: when the update hits, Super Stickman Golf 2 will be going temporarily free for the first time ever, so if you’ve avoided spending money for it thus far, now will be your chance to pick it up and then realize you should have just bought it a long time ago.